15 Big Changes That Will Transform Leeds in the Coming Years

Get a glimpse of the Leeds of the future. 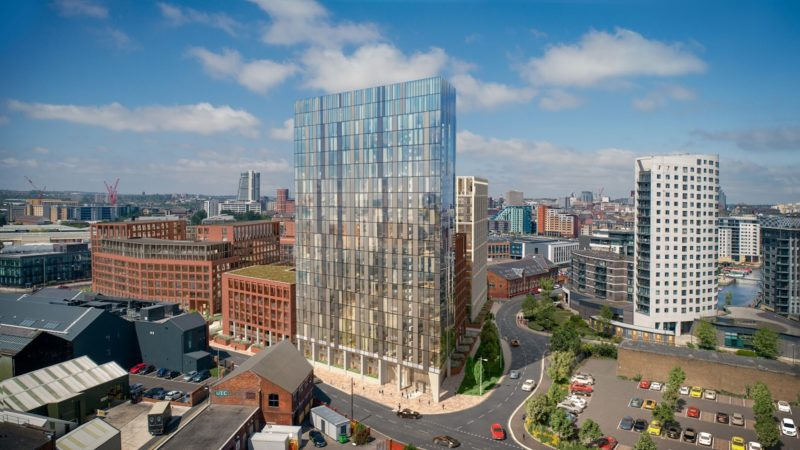 If you want to see how Leeds is going to change over the next few years, you’ve come to the right place.

Leeds is changing at a rapid pace. There are cranes everywhere you look, but they only give a glimpse of what’s coming, so without further ado, let us introduce you to the big schemes and developments that will change the city as we know it. From huge skyscrapers to public parks and regeneration projects, there’s a lot to be excited about.

The arrival of Channel 4

Leeds beat off stiff competition from six other cities to be chosen as Channel 4’s new National HQ and it will have a transformative effect on the city. It’s expected to boost the economy, create hundreds of jobs and bolster our already thriving independent production sector.

Everyone knows they’re taking three floors of The Majestic at the end of 2020, but what you probably don’t realise is that they’re already here. They’ve leased offices in Platform and West Gate as they begin to move their Nations & Regions, Programme Commissioners and Digital Creative Units to their new home.

When fire devastated The Majestic, the future of this Grade-II listed treasure looked bleak. The Parthenon-style frieze was sadly lost, but the iconic facade was saved. Now this iconic landmark is getting a new lease of life as part of a landmark £40 million redevelopment by Rushbond.

They’ve restored the facade and built a 7-storey glass structure, complete with a statement 3-storey atrium. 65,000 square foot has been dedicated to offices, but they’ve left space on the ground floor for a string of new food, drink and leisure units that will be open to everyone. The building will be completed by the end of 2019, ready for the first tenants to move in at the start of 2020.

Plans are afoot to build two new state-of-the-art hospitals in Leeds. It’s all part of Hospitals of the Future, an ambitious vision to transform healthcare in Leeds and the wider region. They’re still in the early stages of planning, but once complete, the new buildings will allow Leeds Teaching Hospitals to expand their critical care services, introduce a new high-tech radiology department and build a string of state-of-the-art theatres for day procedures.

But that’s not all they have planned, because one of the buildings will be turned into a dedicated Children’s Hospital. For the first time ever, Leeds Teaching Hospitals will be able to bring all their children’s services in to one purpose-built hospital. It will combine a bright, colourful decor with the latest, cutting-edge technologies to create a warm, family-friendly space where children can get the best possible treatment.

The redevelopment of Leeds Station has only just started

Leeds Train Station is undergoing a major transformation. By the end of 2019, it will be brighter, airier and easy to navigate. They’re installing a new glass roof, improving the concourse and transforming the entrance on New Station Street. Once that’s done, they’re going to add a brand new platform, improve the signalling system and change the layout of platforms 1 to 6 to help reduce delays.

It’s the busiest transport hub in the North – 30,000 currently pass through the station every day, and that number is expected to double in the next 30 years. So the current programme of work, which represents a £161 million investment, is part of the larger Integrated Station Masterplan. They’re going to bring the existing rail network, the Northern Powerhouse Rail programme and HS2 all under one roof to create a world-class gateway to the north.

The next stage of Wellington Place

Wellington Place has already contributed £200 million to the local economy, but they’ve only just got started. In fact, they’re now moving onto the next stage in their masterplan, which will bring another 830,000 square foot of Grade A office space alongside 50,000 square foot of retail and leisure facilities.

But this time, they’re breaking new ground. For the first time, they’ll be adding residential space to the development with 200 one, two and three-bed apartments. They’re also building a 230-bed hotel to cater for the city’s growing business and leisure industry, and a new 500 space car park complete with electric car charging units. Once stage 2 is complete, Wellington Place will become one of the biggest city centre regeneration projects in the region.

Rushbond are at it again. They’ve announced a new mixed-use development on the grounds of the city’s first ever railway station. In partnership with residential specialists Gold and Amber, they’re bringing 1,000 homes to the old Marsh Lane Goods Yard as part of Leeds City Village. This self-contained community will include a village green with a children’s play area, recreational seating and a drinking fountain.

Alongside the residential space, they’ve built a swathe of new commercial and leisure areas into the designs, including creative, flexible workspaces. The development will also benefit local communities by improving pedestrian and cycling routes between the city centre and Leeds City Village. And of course, it will help to regenerate the area.

The 23-storey tower on the waterfront

A 5-acre site on Globe Road in Holbeck will be transformed into a £180 million development in the next five years. Get Living has submitted plans for 780 flats spread across eight buildings. It will include a statement 23-storey tower alongside a series of new green spaces and public areas.

The addition of cafes, shops and a gym will create a thriving community everyone can be a part of. At its centre will be The Hub, a waterfront pavilion that will include a restaurant and dedicated office space for tech businesses and start-ups. They’re also creating a pathway that will take you over to Granary Wharf via the Leeds Liverpool Canal.

The revival of Tower Works

The historic Tower Works complex is finally set to fulfil its potential. Cedar Maple Oak are creating a built-to-rent residential community on the waterfront. The three iconic Italianate towers will be restored as part of the project, which will create 245 one, two and three bed flats across five buildings.

In addition to the homes, they’re making space for commercial, retail and office units. The development will surround the Engine House, which will be renovated and turned into an independent hub for film and production companies. They’re also creating a new pathway from the city centre over to the site in Holbeck Urban Village.

Howard Assembly Room is one of the best live performance spaces in Leeds and it’s currently undergoing a massive £18 million redevelopment. They’re bringing it in to the 21st century and creating a world-class centre of music that will host more events than ever before. The newly renovated venue will have improved accessibility, an education hub and a new dedicated box office.

Once it opens in 2020, the long-empty units below the concert hall and Leeds Grand Theatre will be repurposed and turned into a string of new bars and restaurants. Alongside plans to pedestrianise New Briggate, this will help to create an aspirational space worthy of the cultural institutions that reside here.

The rejuvenation of Midland Mills

Midland Mills is one of the most important heritage sites in South Leeds. It’s made up of a series of buildings, the oldest of which dates back to 1802, and it has Grade II status, so you can imagine how excited we were to hear that it will soon be put back into use. The existing Victoria mills will be extensively refurbished to create 22 flats and about 4,750 square foot of commercial space.

The newly restored mills will be accompanied by a 32-storey apartment building that will change the city’s skyline. Inside, it will have 284 studio, one, two and three-bed flats, alongside a communal gym, lounge and cinema. On the ground floor, they’re adding 144 bicycle parking spaces to make it easier (and environmentally friendly) to move around the city.

The continued transformation of Quarry Hill

SOYO is a £300 million mixed-use development from Caddick that will completely transform a derelict site at Quarry Hill. The first phase will include two 16-storey rent-only apartment buildings with 515 flats, an on-site gym and a roof terrace. There will also be 9,000 square foot of commercial space for bars, restaurants and cafes.

Once complete, the second phase will add a hotel and two new office or apartment buildings. The arrival of SOYO coincides with the recent redevelopment of Leeds Playhouse and the new Leeds City College campus. Together, these landmark projects are going to reinvigorate the area and turn it into a great place to live, work and play.

The city centre park on the old Tetley’s Brewery site

A five-acre city centre park is at the heart of the plans for the old Tetley’s Brewery site. Just five minutes from Briggate, it will stretch from the banks of the River Aire to Crown Point Road and surround The Tetley. Once it’s complete, it will be a welcome escape from the city and create a new event space that will bolster the city’s cultural offering.

The new park is part of a £155 million development from renowned developers Vastint. They will create 850 new homes, 85,000 square metres of office space and 15,000 square metres of leisure space. As Leeds continues to grow, the number of tourists and business travellers visiting the city will increase, so they’re also building a 400-bed hotel on the site. And that’s not all. The old Crown Hotel will be brought back to its former glory as a pub for the local community.

The arrival of X1 on the South Bank

Work is already well underway on X1, a massive £210 million mixed-use development on Hunslet Road that’s being built by the Guinness Partnership. The first phase will feature a 12-storey apartment building with 127 flats, alongside a gym, roof garden and cafe.

But that’s just the start. By the time it’s complete in 2023, it will have 928 apartments, duplexes and townhouses, right next to the new City Park, and 35% of it has been set aside for affordable housing. Alongside the residential space, they’ve also made way for cafes, restaurants and retail units, as well as creating a new office building.

Brexit may have scuppered our plans for becoming European Capital of Culture in 2023, but it hasn’t stopped us. The city is gearing up for Leeds 2023, a year of cultural and community celebrations and now the Leeds Culture Trust has been set up to make it happen. This independent charity has taken over planning duties with the support of Leeds City Council.

Over the next four years, it will curate an ambitious £35 million programme of cultural activities and events that will put Leeds on the map. It will also work closely with local, national and international organisations to put together a jam-packed 2023, a year which will see the city taken over by a 12-month international arts festival that celebrates everything that makes Leeds great.

The £1.6 million project to create a state-of-the-art film and production facility in Leeds

Leeds City Council has teamed up with Versa Studios to transform an old print works on Whitehall Road into a major TV and film studio complex. The presses of the Polestar Petty on Whitehall Road fell silent in 2014, but plans have been revealed that will see it turned into a £1.6 million filming and production facility.

Kirkstall-based Prime Studios will manage the site, which will have 70,000 square foot of space across six separate studios. They will be neighbours with Opera North who have taken over a warehouse on the same site for rehearsals and storage. The project is another sign of the increased investment in the city’s film and TV industry as a result of Channel 4’s decision to move to Leeds.

FIND OUT WHAT ELSE IS COMING SOON TO LEEDS