10 of the Most Haunted Buildings in Yorkshire

Be careful, you might wake the ghosts in these Yorkshire buildings. 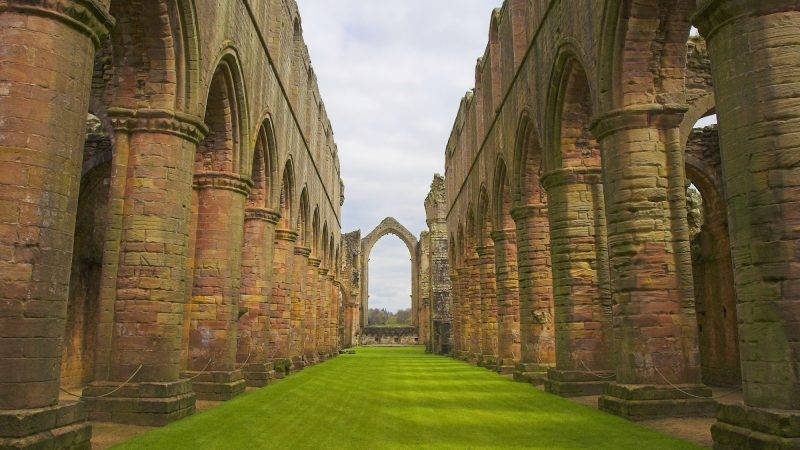 Yorkshire is home to some fascinating historic buildings – and a few of them are home to all kinds of ghoulish ghosts and sinister sights.

Ghosts, poltergeists and paranormal activity – we can argue all day about whether they’re real, but the stories from these haunted Yorkshire buildings have stood the test of time. From chilling rumours of Roman armies to spooky stories of long-gone monks, murdered maids and mysterious crying babies, these ghostly Yorkshire landmarks are not for the faint-hearted. Are you brave enough to pay them a visit?

Credit: David Bramhall licensed under Creative Commons for commercial use.

The Treasurer’s House at York Minster is now a National Trust museum. The Grade-I listed building was originally built on the site of a Roman road. Fast forward a few thousand years to 1953 when Harry Martindale, an 18-year-old plumbing apprentice, was fixing a pipe in the cellar when he heard an ominous musical sound. It grew closer and closer until he looked down and saw around nine or ten pairs of Roman soldiers marching with trumpets past the bottom of his ladder. You can see if they still march down there for yourself, with daily tours running in the same basement to this very day.

Bolton Abbey is one of the only surviving examples of an Augustinian monastery in the country. It was ruined after the Dissolution of the Monasteries, but the east end has been well preserved. The destruction hasn’t stopped it from being one of the most haunted buildings in Yorkshire – it’s said that the existing structures are haunted by the ghost of a monk who died just before the dissolution, and his soul has never been able to rest. He’s been named the Black Canon thanks to his dark cassock, cloak and hat – you can even hear his footsteps wandering around the rectory.

Credit: John Rinder licensed under Creative Commons for commercial use.

Now split into three living spaces, the Grade-II listed Hodroyd Hall on the outskirts of Barnsley has existed in some form since the 12th century and is believed to be home to many a ghoulish spirit. Over the years, there have been sightings of a nun, a monk and a man known as Dr Bell on the staircase, but the most gruesome of all may just be the apparition of a murdered kitchen maid, who was killed and burnt in one of the old fireplaces at Hodroyd Hall.

Credit: Nigel Catterall licensed under Creative Commons for commercial use.

The Black Swan is a renowned pub, hotel and restaurant that dates back over 500 years in Helmsley. Over that time, it’s earned a reputation as one of the most haunted places in North Yorkshire, thanks to a few resident ghosts who have been reported to roam the walls by both staff and guests. There are tales of an old, well-dressed man wandering the corridors, and there have been sightings of an unknown young blonde woman.

Credit: Stephen McKay licensed under Creative Commons for commercial use.

Built in 1890, The Midland Hotel is a classic example of a Victorian railway hotel, but not everyone gets a good night’s sleep here. Dracula author, Bram Stoker, visited Bradford to see his friend Sir Henry Irving perform at the Theatre Royal, only for Irving to collapse during the show. He was rushed to the lobby of the hotel where he then died. It’s his apparition that has been spotted in a smoky haze in the very room he slept in the night before his final performance.

Fountains Abbey, a ruined Cistercian monastery full of beautiful relics of a bygone era, is one of the most popular attractions in Yorkshire, but it’s also one of the most haunted. There have been reports of a ghostly choir chanting in the Chapel of Nine Altars and an Elizabethan man emerging from the panelling in Fountains Hall. The spirit of the daughter of Sir Stephen Proctor, who built Fountains Hall in the 16th century, is believed to roam the halls too.

Built in the 14th century, Bolling Hall is one of the oldest buildings in Bradford. It’s now a museum and education centre, but it was a home for over 500 years and there have been reports of at least 20 ghosts in that time – the earliest dating back to the 1600s. From the White Lady floating in a period dress to the incessant sound of a baby crying around the hallways, it’s a spine-chilling experience, but the spookiest of them all has to be of the man in long coat tales, standing by the fireplace in the Blue Room.

Most Haunted named The Fleece Inn in Elland as the most haunted pub in Britain and there are loads of incredibly chilling tales from this 400-year-old watering hole. There have been reports of murders, secret tunnels and headless horsemen at the pub, but its current landlords have their own tales of a poltergeist. From glasses falling off shelves to shadowy figures moving between rooms, it’s not for the faint-hearted – whether you’ve had a pint or not.

Credit: PJ Marriott licensed under Creative Commons for commercial use.

Carbrook Hall has been known for many years as one of the most haunted pubs in Yorkshire. Currently closed and about to become a not-so-spooky Starbucks, it was a pub and meeting place for hundreds of years, but the only patrons it has had recently are ghosts. The spirit of John Blunt, who owned the pub when Oliver Cromwell used it for meetings in the 1640s, roams the halls – as does one of an elderly woman wearing 1920s attire. Beware of the loos, there’s a mischievous ghost who makes leaving the cubicles near impossible.

Credit: Rick Ligthelm licensed under Creative Commons for commercial use.

It’s a picturesque Elizabethan manor house near Driffield, but Burton Agnes Hall has more to it than beautiful rooms and landscaped gardens. It’s home to the ghost of Anne Griffith, daughter of Sir Henry Griffith who built the hall. She was attacked and killed in 1620. Before she passed, she claimed she could never rest unless a part of her could remain in the house, so her sisters agreed her head would be severed and stay there forever. There have been attempts to throw it away over the years, which woke her angry spirit. It’s now believed the skull has been built into the walls of the Great Hall.