Wonderfully absurd and utterly over the top, Trial by Jury will have you laughing in the aisles. 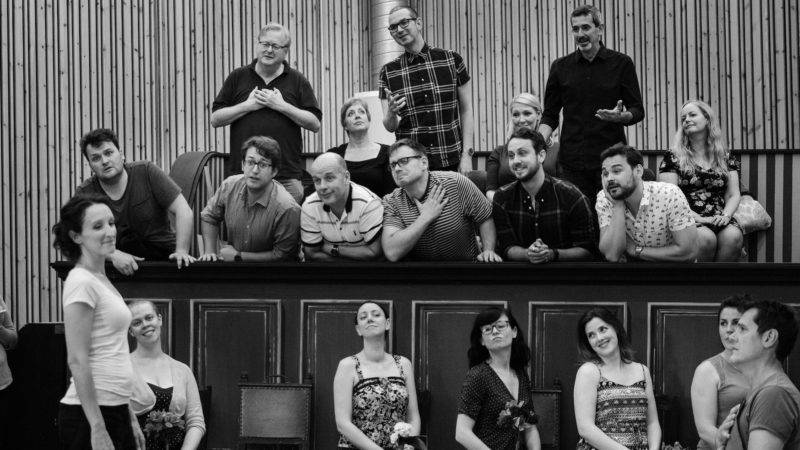 What would you do if your ex-fiance took you to court for breaking off your engagement?

That’s the problem poor Edwin has to deal with when the oh so glamorous Angelica decides she’s not letting him go without a fight. She sues him for breach of promise, which sounds utterly ludicrous, but actually, it has a basis in law. The funny thing is, the judge and jury are on her side. They fall under Angelica’s spell, leaving Edwin in a very tricky position – will he escape the clutches of a woman he finds utterly dull or will Angelica get her dream of walking down the aisle?

Trial by Jury is utterly nutty by any standard, but Opera North have upped the ante by giving it all the glamour of 1930s Hollywood. Angelica, the plaintiff, is a film star, so when she’s jilted by her fiancée Edwin, the press has a field day. They whip the public into a frenzy ahead of the court case, and Angelica plans to give them quite the show.

She turns up with her bridesmaids in tow, and yes, they’re wearing the very same shocking pink dresses they were meant to wear to the wedding! It’s all as crazy as a coconut, right down to the arguments (Edwin asks if he can marry two women!) but everyone takes it completely seriously – and that makes it even more ludicrous. Get ready for a rip-roaring night out, folks.

You’d be amazed at just how much happens in 45 minutes. They absolutely hurtle through the story, giving you the most hilarious and dramatic version of events, as Angelica woos the jury and Edwin tries to talk himself out trouble. “No moment is wasted,” Director John Savournin told us. “It’s like an assault on the senses, but because of the lighthearted nature of the story and the fact that it’s so tongue-in-cheek, it’s very easy to watch.”

3. The music is wonderful – you’ll be whistling the tunes all the way home

This is one of Gilbert and Sullivan’s first operettas. They went on to become one of the most famous duos in history, with hits like The Pirates of Penzance, HMS Pinafore and Iolanthe, but this early collaboration was a little different from the others. Why? Because it’s written entirely in song.

Later, they put a lot of dialogue between their numbers, but in Trial by Jury, it’s just one long string of back-to-back songs. The result is a crazy, ever-moving and incredibly catchy opera that’s guaranteed to get stuck in your head. From the chorus of objections in ‘I Love Him’ to the playful tink-a-tank of Edwin’s guitar in ‘When First My Old, Old Love I Knew’ – opera has never been so much fun.

4. You never know quite what to expect

Even if you’ve seen Trial by Jury before, you’ve never seen it like this, because Opera North have taken the restless, frenetic energy of the opera and infused it into the set.

“The set actually moves. As opposed to us having this super realistic courtroom that’s set in place from the word go, I wanted to keep it free, flexible and mobile. As a result, it’s more entertaining. You don’t know where it’s going to go next, how the cast is going to be contained within it or even how they’re going to ride around on it, so it’s got some madcap humour in there,” Set Designer Charles Edwards explained.

5. This is the Chorus of Opera North at its very best

One of the things that makes Trial by Jury stand out is the fact that it requires everyone in the cast to work as both an ensemble and a soloist. That’s a huge challenge, but one that Opera North are uniquely prepared for.

“Everybody is drawn from the Chorus of Opera North, which is the most astonishing opera chorus on the planet as far as I’m concerned – I’ve worked all over the world and I’ve never come across a group of people quite like this. They’re an amazing group of soloists, who are somehow capable of performing as an ensemble, equally convincingly, I’ve never seen anything quite like that,” Edwards told us.

And that’s coming from a man who is not only doing the sets and lighting for the entire season, but is also directing Pagliacci.

6. It’s an opera, but it has the feel of an MGM musical

You know that scene in Gentlemen Prefer Blondes, where Dorothy Shaw is pretending to be Lorelei Lee on the stand? She whips off her coat and breaks into song in a raunchy little outfit. Well, not to give anything away, but if you like that, you’re going to love Trial by Jury.

It’s a homage to the Hollywood’s golden era, so alongside the glitz and the glamour, you’ll see a little of your favourite movies in the show they’ve created. “There might be a couple of references to iconic films in there for people to spot. We’re opening outside the courtroom, in a scene that could easily feel like a film premiere – if you’ve seen the beginning of Singin’ in the Rain, you’ll know what I mean,” Savournin told us.

7. It’s got a surprise at the end that you’ll never see coming

This is one of those shows that will have you wondering where the hell it’s going. Will Edwin get his way? Will Angelica win out? Or have Gilbert and Sulivan lined up one of their famous plot twists? We’re not giving anything away, but rest assured – all your guesses are way off base.

Psst… if it’s your first time, you can get the best seats available for a tenner

Never been to the opera before? Now’s the time to go because you could save up to £18 on your ticket. Just take advantage of Opera North’s ‘Try for £10’ offer. Call 0844 848 2720* to book your tickets and you’ll be allocated the best available seats on the day.