A Familiar Story, a Spectacular Soundscape and a Dramatic Twist – Here’s Why You Need to See The Greek Passion

This is theatre at its very best. 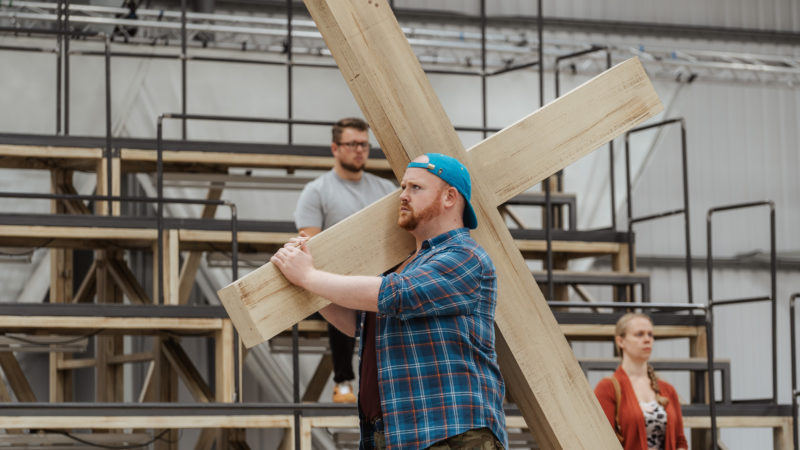 A tale for our times, The Greek Passion deals with the complex issue of refugees through the power of music. This is Bohuslav Martinů’s original creation, a triumph of drama and music – don’t miss it, book your tickets now.

In an artful reimagining by Opera North, the original version of rarely seen The Greek Passion comes to Leeds Grand Theatre this autumn.

It was written over 60 years ago, but The Greek Passion is as relevant today as it has ever been. It’s a vivid depiction of the refugee crisis, broken open and laid bare so you can see to the very heart of the matter – and it comes with a tragic twist that leaves an entire village reeling. Set to Bohuslav Martinů’s eclectic and ever-surprising score, this is a night out you won’t soon forget, so what are you waiting for? Get stuck in…

It’s surprisingly down to earth

The villagers have come together to put on a passion play. They’re telling the story of Christ and everyone has a role to play. But as they get into character, they begin to take on the personalities of the people they play. As Manolios becomes more Christlike, Panait descends deeper into the villainy of Judas, and as a result, the community is torn apart.

It all sounds quite far-fetched, but behind it all, this is a story of real people working through the same issues we all work through. From the woman’s place in a patriarchal world to the isolation of feeling disconnected from society, their struggles are universal and it’s impossible not to empathise with them.

The music is wonderfully eclectic

The score is one of a kind. It has an Eastern European flavour with a folksy feel that’s brought to life by harpsichord, accordions and recorders, but it sits alongside big orchestral numbers that will blow your socks off. It has lots of narrative and none of your usual operatic arias, giving the whole production a fragmented filmic feel. Unusual? Yes. Awesome? Absolutely.

It’s more relevant today than it’s ever been

The refugee narrative has never been more prominent than right now. Trump is obsessed with building his wall and Brexit has been ensnared by the politics of immigration, so it would have been only too easy to set The Greek Passion in the modern-day, but Director Christopher Alden resisted.

“It was very tempting to pick one of those specific situations where it’s happening,” he explained. “We could have set it on the Mexican border or on a Greek island where some of the refugees are being processed, but rather than pointing a finger and condemning one particular place, we decided to use a more universalised, open-ended, non-specific setting, so the piece would resonate with everybody.”

Bohuslav Martinů wrote The Greek Passion for the Royal Opera House, but in 1957, they turned it down. Martinů was so devastated that he split the score into pieces and gave it to his friends, he literally gave it away, so when Zurich Opera House expressed their interest, he had to rewrite it.

By the time it premiered in 1961, it was a very different piece. It wasn’t until 1999, after a complex reconstruction of scattered manuscripts, that the original finally found its way to the stage. Now, twenty years after it was first performed, Opera North will bring Martinů’s forgotten score back to life once again, giving you a rare opportunity to see it.

The refugees are represented by 46 life-sized effigies

The Greek Passion usually has two choruses, one for the villagers and one for the refugees, but in Opera North’s version it will only have one. Their chorus will sing both roles – they won’t, however, play them both. Instead, the refugees will be represented by 46 life-like effigies, made with casts of the set designers’ bodies.

“We wanted to avoid the pat way of doing it, where the chorus plays the villagers dressed in one set of clothes, then they exit and come back dressed in rags and suddenly all us well-fed artists are trying to portray refugees. That seemed too easy, so we created these beautiful white sculptural effigies which the chorus carry around as they sing their parts,” Alden explained. “The point we’re trying to make is that the only thing that separates us from somebody in that position – a refugee or an asylum seeker – is just the pure good fortune of our situation.

One guy is weirdly attached to his bicycle

The Greek Passion is a tragedy, but that didn’t stop Martinů from adding a little light relief, which is why he wrote a donkey into the script. It’s more than just a donkey, it’s Yannakos’ best friend in the world, and he’s hoping that it’ll get a starring role in the play, as the donkey Christ rides into Jerusalem. Except in this more modern version, the donkey is a bike, which makes it all the more comical.

It will make you rethink the refugee issue

Imagine if your town had been destroyed by war, if you’d lost all your earthly possessions and walked through the mountains to find shelter. That’s what has happened here, but the refugees don’t find the help they seek. Instead, the village priest, afraid for his own congregation, plants seeds of doubt in the community, and each person must wrestle with their own conscience to decide what they should do.

“It’s about the villagers’ feelings towards the refugees. They’re pulled into their cause, but then again, the priest keeps telling the villagers that the immigrants are here to takes things away from them and to pollute them,” Alden told us. “It becomes very much about how we feel about refugees: totally sympathetic to the idea of supporting them, and yet, if someone asked you to bring three refugees into your home, you’d have ambivalent feelings about it. Hopefully the audience will ask themselves, with all these things happening in the world, why aren’t they, why aren’t we all, stepping in to do more about it ourselves?”

Opera – try it once and you’ll be hooked, which is why Opera North launched Try It ON! Sign up now and you can get one of the best seats in the house for just £20. It’s the perfect opportunity to dip your toe in the water and what better way to do it than by going to see The Greek Passion?

The Greek Passion runs from Saturday 14th September to Saturday 19th October 2019 at Leeds Grand Theatre. Get your tickets now…