Broadway, Jazz & Pop Culture – You Ain’t Never Seen An Opera Like This Before

Heartbreaking but hopeful, Trouble in Tahiti is a surprisingly real story of love gone awry. 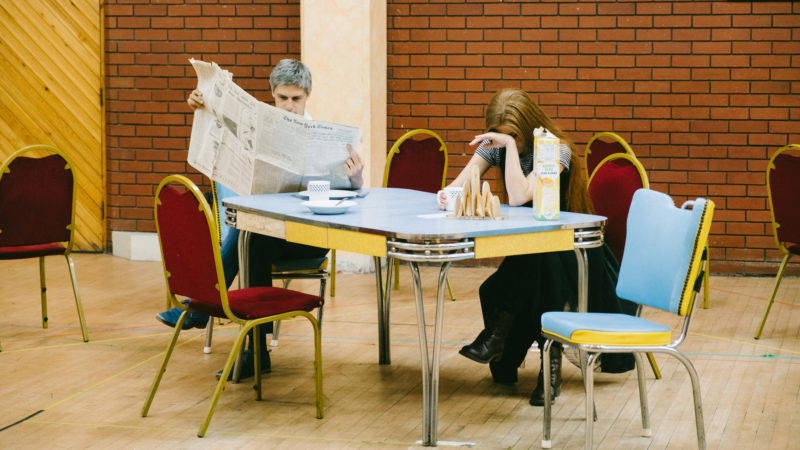 There's never been a better time to go to the opera, because you can see Trouble in Tahiti on Saturday 14th October 2017 for just £10, with a FREE glass of prosecco at The Pit. Book now & quote ISLANDMAGIC.

Composed by Leonard Bernstein, the fella who gave us West Side Story, Trouble in Tahiti blurs the line between the musical and the opera.

It’s part jazz, part musical and part opera, with a storyline that everyone can relate to. Dinah and Sam are living the American dream. They fell in love, got married and had a baby – but somewhere along the way, they grew apart, and they don’t know how to find their way back to each other. By the end, you’ll be rooting for them – but their complicated relationship isn’t the only thing that will have you engrossed.

Ok, so you know Don and Betty Draper? They look like the perfect couple, they’ve got the beautiful house, the lovely family, the nice car, they’re living the dream – but behind closed doors, everything’s falling apart. And the same’s true of Sam and Dinah. They have everything they could ever want, but they’re not happy.

It lifts the curtain on the American dream

In many ways, Bernstein was ahead of the curve. Trouble in Tahiti was written in 1952, when suburban living was only just taking off, and yet he predicted exactly what would happen. He saw right through the ‘American dream’ and the myth of the perfect, happy life it presented – seeing the truth behind the lie, that money can’t make you happy.

“Sam and Dinah live in this perfect suburban house, and they have all these amazing things, but despite all this stuff, they are very unhappy in their relationship,” Director Matthew Eberhardt explained. The reality of their married life is contrasted against the oh-so-happy commercials on the radio, which are sung live on stage by a jazz trio. It’s an incredibly effective way to put the dream and the reality, side by side.

It’s surprisingly real – even though they’re singing, they talk like normal people

One of the things that makes Trouble in Tahiti stand out is the libretto (that’s the words to you and me). It sounds like a 1950s American sitcom. They bicker over breakfast, have banter in the gym and chat to therapists in the same way that you or I would, except of course, they sing it. It makes the whole thing feel more like a musical than an opera, and you almost forget that they’re singing.

Trouble in Tahiti is a real mixed bag when it comes to the music. It’s technically an opera, that’s what Bernstein called it, but in places, it’s got a real jazz-like quality, and there’s definitely a hint of musical theatre in there too. But what’s really interesting is the way Bernstein uses the music to tell the story. You see, when you hear jazz, you know the radio’s on, painting a picture of the American dream, and when you hear opera, you know it’s the real life. But then there are these incredible musical interludes when they escape from their broken relationship, and let loose with these fantastic Broadway-style numbers.

“There are two numbers right at the end where Sam and Dinah get to really show who they are as people for the first time, so instead of going to the office or sitting around the breakfast table, Sam goes to the gym and sings this incredible musical theatre number about being a man,” Matthew told us. “And the same for Dinah. She’s been in the family home where she feels stifled or seeing her analyst talking about how unhappy she is, and finally, she gets home later and recounts this amazing film that she’s seen in this incredible number called Island Magic. And these numbers are all about escapism.”

There are just 5 singers, but they’ve used the whole Opera North Orchestra

Trouble in Tahiti is usually a small-scale production. There’s no chorus, just the two leads and a radio trio, so it’s often performed with a reduced orchestra – but as you probably know, Opera North don’t do things by halves. They’ve put the full force of the orchestra behind it – and the result is awesome.

It takes you behind the scenes, to show you something you don’t usually see

Sat in their pristine kitchen, while their son Junior plays in the living room, Sam and Dinah may look like a picture-perfect family, but appearances can be deceiving. In fact, the ‘lovely life’ they’re selling on the radio is a fantasy cooked up by grubby ad men behind the scenes – and Set Designer Charles Edwards has captured this perfectly by building a backstage recording studio into the set for the radio trio, as if they’re hard at work in the background of the couple’s domestic life.

There’s nothing glamorous about the hidden world of advertising. Clark has kitted them out in the clothes they would have been wearing at the time – and they aren’t the ones they’re singing about. “We’ve dressed the trio kind of real very late 40s, early 50s job-a-day, workers’ clothing, and they have all got this nicotine sort of palette to them, we found some really fantastic images of recording studios in that era with everyone with their rolled up sleeves and cigarettes in hands, you know scripts on the table and things. They are really lovely and very atmospheric, so we took those as a starting point for the trio and the creation of that world.”

A whole lot happens in 45 minutes, no seriously, 7 scenes!

Action-packed doesn’t even begin to cover it. Trouble in Tahiti is just 45 minutes long, that makes it a third of the length of your average opera, and yet, they’ve squeezed an entire day and seven scenes it, with quick-fire set changes that transform the stage before your eyes.

“You get all these locations that they experience through the course of their day, which is actually very unusual for an opera. An opera that’s 45 minutes long might be one long scene or it might be two scenes, but this is seven scenes, you get seven different situations in one,” Eberhardt explained. “Bernstein has a real art for making sure that every scene has a really clear function and is really focused, and nothing is kind of superfluous. I mean there are certainly standout scenes, the island magic scene at the end is really good fun, but ultimately every scene has its function and its role, some are fun, others are heartbreaking.”

In the past, it’s always been rather tricky to make proper 50s style costumes. You either had to buy modern fabrics that looked a bit like the originals or source the real deal and accept that you might not be in the best condition and there might not be enough of it. But those days are gone, thanks to modern technology.

Now you just need a picture of an old fabric and you can have it recreated in beautiful technicolour – and that’s exactly what Clark has done. “It was a little piece, a photograph of a piece of Hawaiian fabric that I found on the internet, and I sent them the picture and they turned it into artwork, so they created a floral repeat pattern out of the little picture I sent them, then did a print run on the fabric and sent me a big blanket with lots of different versions with slightly different colour combinations on each.” You’ll have to come to the show to see how it came out, but it’s fair to say that it’s spectacular!

Get tickets for a tenner with a FREE glass of prosecco

Want to go see Trouble in Tahiti on Saturday 14th October 2017? You can get tickets to their 2:15pm matinee for just £10 with a FREE glass of prosecco and 40% off food at The Pit. Just book price band A or B tickets with our exclusive code ISLANDMAGIC (and save up to £21). Hurry, offer ends Friday 13th October 2017.