Dark, Haunting and Atmospheric, The Turn of the Screw is the Show to Watch This February – And You Can Get Tickets for Just £20

See The Turn of the Screw at its terrifying best. 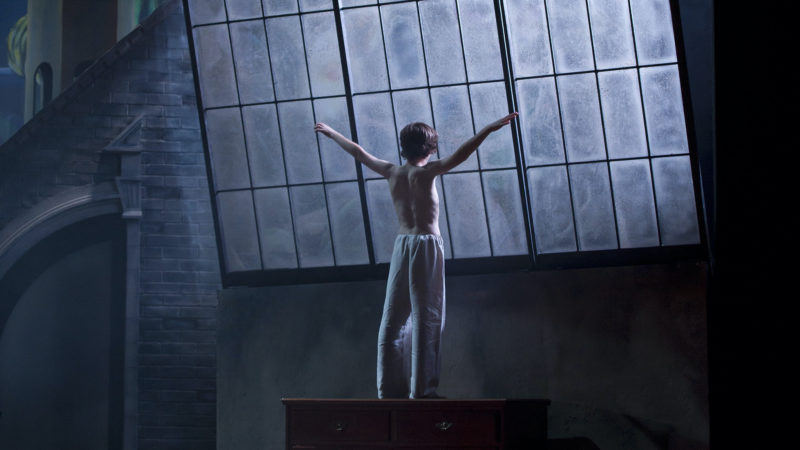 Based on the ghost story by Henry James, The Turn of the Screw is an edge-of-your-seat psychological thriller that reaches new levels of terror and claustrophobia. Made all the more terrifying by a haunting, atmospheric score, it’s a must-see. Book now.

You’ve read the book, you’ve seen the film, but you ain’t never seen The Turn of the Screw like this before…

This February, Opera North will bring The Turn of the Screw to the stage and it’s impossible to tear your eyes away from. Ghostly apparitions appear out of nowhere and shadows come to life, but even as you watch the terror they inflict, you’ll find yourself wondering if there’s more to this story than meets the eye. It’s a spine-tingling watch and one that even first-time opera-goers will enjoy, so make the most of Try It ON and get the best seats in the house for £20.

The Turn of the Screw is one of the most famous ghost stories ever written. It follows a pretty young governess who takes a job at a remote country house. Except this is no ordinary job – her employer has given her strict instructions never to contact him and her charges are being stalked by the ghostly spirits of their former governess and valet. Up against unearthly enemies with a devious plan, she must protect the children in every way she can.

But if you thought the book was good, just wait until you see the opera. Benjamin Britten’s score has brought a haunting intensity to the story – it’s eerie, dissonant and almost Hitchcockian in style, building the suspense as you head towards that climactic ending. “Britten uses the ‘low’ instruments of the standard woodwind group, so instead of flute, oboe and clarinet, he uses alto flute, cor anglais and bass clarinet, as well as a quiet harp and a brutal glockenspiel – these instruments together create a truly frightening and sickly soundscape,” Conductor Leo McFall explained.

The Turn of the Screw is making a comeback

Written in 1898, The Turn of the Screw has been passed down through the generations – and not just in book form. Britten’s opera premiered in 1954, and seven years later, Jack Clayton released his film adaptation, The Innocents. Both found huge success. Now, as Opera North prepare for their revival of Alessandro Talevi’s haunting production of The Turn of the Screw, a new film adaptation called The Turning is coming to cinemas. It just goes to show that James’ novella is as popular now as it’s ever been.

Is it real or is it all just a figment of her troubled imagination?

Despite the ghostly apparitions, The Turn of the Screw certainly isn’t your run of the mill supernatural horror. James plants the seeds of doubt at every turn, so you never know if it’s real or if it’s just a figment of the governess’ disturbed imagination – and that’s what makes it so good. It’s a psychological thriller that will keep you right on the edge of your seat.

That sense of uncertainty is right at the heart of Director Alessandro Talevi’s vision for the opera, “For me, the basis is keeping the ambiguity of the novel, which is what Benjamin Britten based his opera on, because I feel strongly that it’s the ambiguity, the sense of not knowing whether the ghosts are real or whether they are a product of the governess’ fevered imagination, which is the driving force of, the energy of, the story. What keeps the novel such a page-turner is this sense of not knowing, and really, the audience wanting to find out right until the very end of the piece. So, for me, that is really the heart of the interpretation.”

The governess is always there

The Turn of the Screw is set in a remote country house, but Opera North has taken a little creative licence with the staging. It’s like you’ve fallen down the rabbit hole, everything is distorted and strange, oddly scaled and a little nonsensical. It’s incredibly unsettling, leaving you to question if what you’re seeing is a remote country house or an interpretation of that house, seen through the governess’ mind.

And that’s not the only thing that will make you wonder. “The governess is on stage the whole time,” Sarah Tynan, the soprano who plays the governess, told us. “Usually she will come and go, but here she’s on stage the entire time, even when the ghosts are on, even if she’s asleep or if she’s slightly in the situation or out of the situation, she’s always there. So you never know whether you’re reading it from her thoughts or whether she’s projecting onto it.”

They’re using body doubles! That’s right, body doubles! So when you see someone lurking in the shadows, it may not be quite what it seems. Once again, you’re left to wonder what’s real and what’s not – is this the person you think it is or another illusion designed to lead you astray? In this dark, twisted world, the impossible is made possible, so don’t be surprised if a ghostly apparition magically appears before your eyes.

This is irrefutable evidence that size doesn’t matter

The Turn of the Screw is a small opera. There are 13 instruments in Britten’s pared down orchestra and just six singers on stage, but that only adds to the experience. You really feel like you’re stuck in a house in the middle of nowhere, there’s no one else around, no one else can help, so you get a real sense of the isolation the governess must feel.

“It’s a tribute to Britten that you never miss a big cast or a big orchestra in this opera,” McFall told us. “The sense of intimacy needed for the story is perfectly conjured up by the small orchestra and the cast of six – a large orchestra would feel out of place. At the same time, the thrill of orchestral sound is 100% present there – 13 instruments can pack a hell of a punch!”

Perhaps the most disturbing thing about The Turn of the Screw is that the ghosts aren’t scary to the children. They’re familiar, they’re alluring and they draw the children in with the promise of wild adventures in an unseen world. As you watch them in their magical dreamscape, it’s easy to understand how the children are led astray – but it’s also shocking to see these sweet, young creatures cast off their innocence and reveal a much darker side to their characters.

The transformation is made all the more impactful by the music, because when you go to the opera, you don’t just see the horror, you feel it. Like the children themselves, Britten’s sweet nursery rhymes are corrupted by the introduction of a few strange characters, but for him, they’re instruments, not ghosts. And later, as Quint clashes with the governess in the grand finale, the power of their combined voices almost tears the music apart, with terrifying effect. Watch their interactive trailer and you’ll soon see what we mean!

If this is your first time, you can get one of the best seats in the house for just £20 with Try It ON. This is your chance to settle down in the stalls and enjoy a stellar night of entertainment, with all the smugness of someone who just saved up to £65 – you’ll even get a special goody bag to take home. So what are you waiting for? Book your tickets to The Turn of the Screw now.