Gossip, Hanky Panky and a Song About Ice Cream – Street Scene is a Rip-roaring Show You Simply Mustn’t Miss 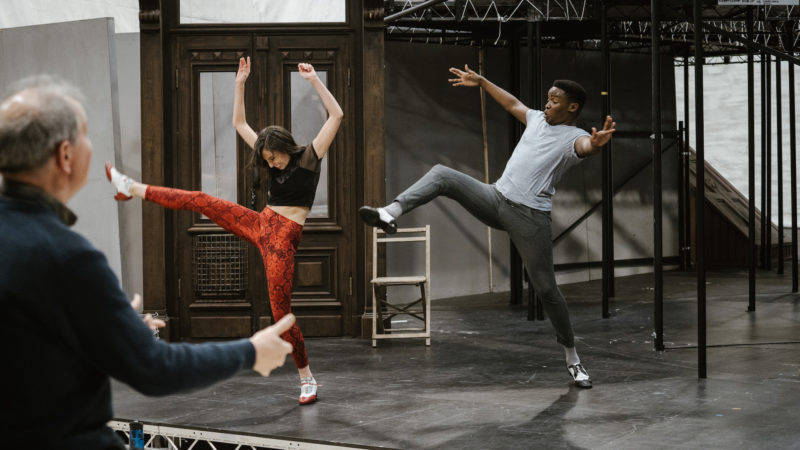 Street Scene is the perfect blend of opera and musical theatre. Soaring arias and duets rub shoulders with jazz and the jitterbug, as the burning heat of a New York summer pushes one family to the brink. Book now...

Based on the Pulitzer-winning play of the same name with a Tony Award under its belt, Street Scene is a must-see. Catch it at Leeds Grand Theatre from Saturday 18th January to Friday 28th February 2020.

You know what they say – start the year as you mean to go on, and by that, we mean by trying something totally new, like going to the opera. And where better to start than with Street Scene? It’s an all-singing, all-dancing extravaganza with the feel of a Broadway musical. Get ready to lose yourself in the dramas and dilemmas of a small New York community because they’re cranking up the heat and cracking out the hits. ‘Lonely House’ and ‘Moon-faced, Starry-eyed’, you name it, they’ve got it in this unmissable show.

In a bustling tenement building on the Lower East Side, a motley crew of New Yorkers go about their lives. There’s a Jewish student with a crush on the girl upstairs, a husband who gets himself in hot water with his pregnant wife and a young girl who’s about to escape to art school. In the midst of a 1940s heatwave, they come and go, they sing and dance, but behind closed doors, something much more sinister is afoot.

There’s so much life in this production. It’s bursting with colourful characters and compelling subplots, something that’s only possible because of the sheer size of the cast. There are 32 named roles in Street Scene, which is absolutely insane and almost unheard of, so you’ll find yourself jumping from saucy trysts to an intense act of violence as the heat of summer reaches a climactic boiling point.

Forget ‘Just One Cornetto’, this is the original ode to ice cream. When Italian-American Lippo Fiorentino returns home with a bucketload of ice cream, he becomes the most popular guy in town. In the sweltering heat, it’s just what they need and it sets them off on a mad-cap sextet inspired by Italian opera and smooth jazz. You’ve got to hear it to believe it.

Someone’s actually having an affair with the milkman

As the action unfolds, you’ll find yourself drawn into two distinctly different love stories. Frank hasn’t been the same since he came back from the war. He drowns his sorrows in a bottle and takes it out on his family, so it’s no wonder his wife Anna is having an affair with the milk collector. It’s the ultimate cliché, but when Frank finds out, all hell will break loose.

Meanwhile, their daughter Rose is fending off suitors from every direction. When her brutish neighbour Vincent makes a pass at her, Sam steps in to protect her – this quiet, unassuming boy becomes a modern-day knight in shining armour. It could be the start of something special, but as they share their dreams of escaping the tenements, fate intervenes.

You can step into their world and their lives

Although Opera North has tried to honour the original spirit of the piece, they’ve made one big change – their set will take you from the streets into the tenement itself, so you can get a glimpse of rooms and apartments where lives are lived. It’s a bold move and quite the sight – there’s no exterior wall, just a maze of rooms and stairways that lead you into the intimate world of each family.

“The Lower East Side in the 1940s was no easy place to live, so having an environment that was tricky to navigate felt important,” Director Matthew Eberhardt explained. “I remember Francis, our designer, and I looking at various Escher drawings as inspiration. Also, escape is a very important theme within the piece and, for us, the architecture of the house becomes the prison in which its inhabitants are trapped, so it will feel quite claustrophobic I think, alongside moments of dreamy escapism.”

The sheer diversity of the music has opened the door for a raft of creative lighting techniques. Expect the unexpected here. There’s the bright light of a summer’s day and all the romance of moonlight, but they’ve also taken their cues from Broadway’s fantastical colour palettes to keep you on your toes. There’s no one style, it’s a wonderful mish-mash of light and colour with all manner of surprises in store.

“The shadows will be as vital as the light itself,” Lighting Director Howard Hudson told us. “The set is beautifully three dimensional and will offer fantastic opportunities for light to scrape across surfaces and through the structure. With the huge painted surrounds, we’ll be able to silhouette the structure against these, which should give a really dynamic image. The set has lots of different areas, so controlling the areas of light should give us lots of different pictures to help with the storytelling.”

New to opera? Street Scene is the perfect choice because it bridges so many art forms. At times, it feels more like a Broadway musical – singers double as dancers and the music is toe-tappingly good – but it’s also got lots of dialogue, so if you’re partial to a play, you’ll feel right at home here.

“It’s almost impossible to pin the piece down to a particular genre. Some moments are more musical theatre, or Broadway, for sure. At times, it feels like a play. A lot of the dialogue is taken from a play by Elmer Rice. Other moments feel operatic in nature, especially some of the more emotionally charged sequences,” Eberhardt explained.

If this is your first time, you can get one of the best seats in the house for just £20 with Try It ON. This is your chance to settle down in the stalls and enjoy a stellar night of entertainment, with all the smugness of someone who just saved up to £65 – you’ll even get a special goody bag to take home. So what are you waiting for? Book your tickets to Street Scene now.