How Leeds Came to Have the Tallest Mural in the UK

Look out for this little beauty on your morning commute. 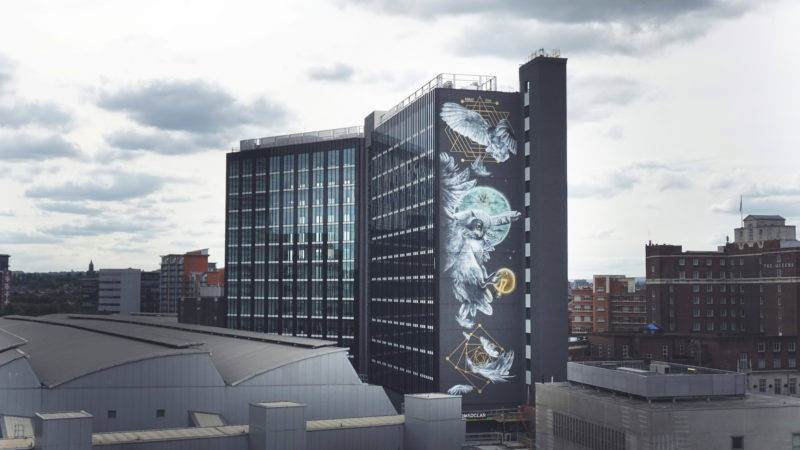 Athena Rising stands tall over commuters, but what’s its story? We found out…

This year, Leeds bagged itself a new title – it’s now home to the tallest mural in the UK. Standing at 46.8 metres (that’s 153 feet to you old school types), it’s about the same height as the Statue of Liberty, and it’s impressive to behold. Work started on 6th June 2017 and it was finished just three weeks later, but while it may have been created in record time, the piece itself has been in the planning for months.

“We started working on the project 7 months ago after winning a commission to be one of the muralists involved in ‘City Less Grey’ project run by East Street Arts, an incentive to improve areas of Leeds with large-scale artwork,” Joy Gilleard, aka Cbloxx, told us – she’s one half of Nomad Clan, a dynamic graffiti duo made up of herself and Hayley Garner, aka Aylo.

But it wasn’t always meant to be so big, in fact, they came into the project expecting to do a wall that was just nine metres by three – but then Bruntwood, the owners of the Platform building Athena Rising is painted on, suggested something much bigger.

“Bruntwood apprehensively mentioned there might be another option, as soon as we saw the giant wall we knew we wanted to push for that one,” Joy admitted. “It seemed like a bit of a pipedream as we would need approval from so many different bodies, including the council… but we persevered, jumped every hurdle and luckily it all paid off!”

Although they were given the freedom to do pretty much whatever they wanted, the design has changed massively since their original ideas, but not necessarily in the way you’d expect. They haven’t added to it, instead, they’ve simplified it down, eliminating elements as they worked their way through the rather lengthy approval process.

Once it was signed off, the real work began. Nomad Clan are no strangers to large-scale murals. They’ve worked on statement pieces in Liverpool, Manchester, Berlin, Lille, Blackburn, Blackpool and right here in Leeds, so they know what they’re doing.

They started with a drawing and transferred this to their urban canvas using a grid system. “On this design, we used a lot of the background colour of the wall which we knew would speed up the process. We added really rough highlight sketches as we went down, this just gives your brain and eyes more clues as to where you are on the wall. Imagine it to be a bit like map reading, the more features on the horizon the easier it is to navigate,” Hayley explained.

And they had a little help. The whole project has been documented by artistic photographer Bokehgo and his team, but they ended up having a surprising role to play in the process itself because Hayley and Joy used their pictures to make sure the piece was coming together the way they wanted it to. That’s one of the biggest challenges of a mural this big – they had to work from an aerial lift, so they always had a close-up view of their work. They genuinely couldn’t see the bigger picture.

Mind you, that wasn’t their biggest problem. “We had a very real fear of the cradle as we’d never been dangled off a roof before, we’re used to lift platforms but they are machines that sit on the floor,” Joy confessed. “Dangling sounded like a nightmare… wind is an enemy at the best of times when you’re spray painting but being suspended on a swing that is basically weighted down at the top is a whole new level of scary. It moves more than you can imagine!”

And all the while, they had an audience. There’s no hiding your progress when you’re painting a giant mural – the whole process is on display for all the world to see, and indeed, hear. They were half way through the project before they realised that commuters on the platform below could hear their arguments on high. But it goes both ways, because they had their fair share of surprises too.

“Hayley did a cry at one point when the day turned from beautifully warm and calm to a full blown storm. The cradle whipped out from the wall and Hayley thought she was going to die, she wasn’t at all but the drama was impressive.” Joy told us. “Another day, some smart looking suited professionals secretly piggy back raced down a back street thinking no one was watching, one of them got dropped on their face!”

Their days of scaling Leeds’ skyline are finished now though, because the mural is complete – and it definitely has the desired effect. It’s part of East Street Art’s mission to make Leeds ‘A City Less Grey’, and is funded by Leeds BID. Check it out next time you’re in the area – it’s on Bruntwood’s Platform building, which is directly above Leeds Train Station.