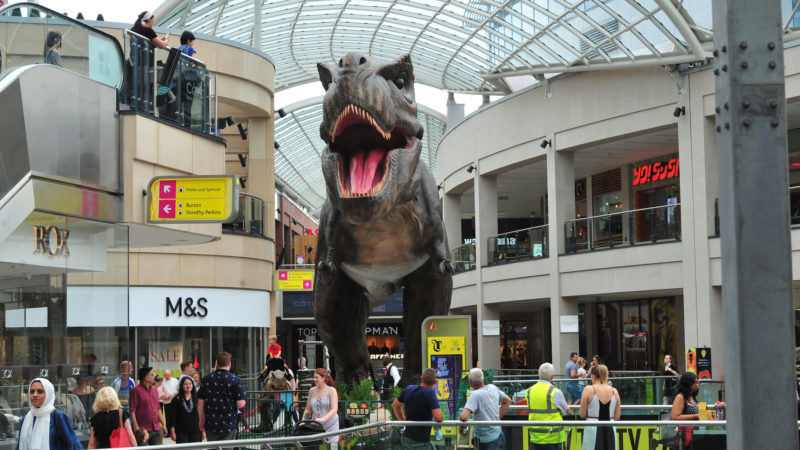 Leeds Jurassic Trail is back with a bang! From 30th July to 4th September 2022 you can join the hunt for 12 life-sized animatronic dinosaurs, with brand new beasts. It’s family fun galore with free events every weekend and discounts galore. Find out more.

It’s only really summer when there’s a dozen dinosaurs for you and the kids to hunt down across Leeds city centre!

Summer’s here, the kids are on holiday, and the city centre is overrun with dinosaurs! Yep, the Leeds Jurassic Trail makes another welcome return, with a dozen dinosaurs to discover, family fun galore and a few wonderful surprises for you to find along the way. It’s the perfect way to keep the kids entertained, and we’ve got all the details of what to do and where you need to go. 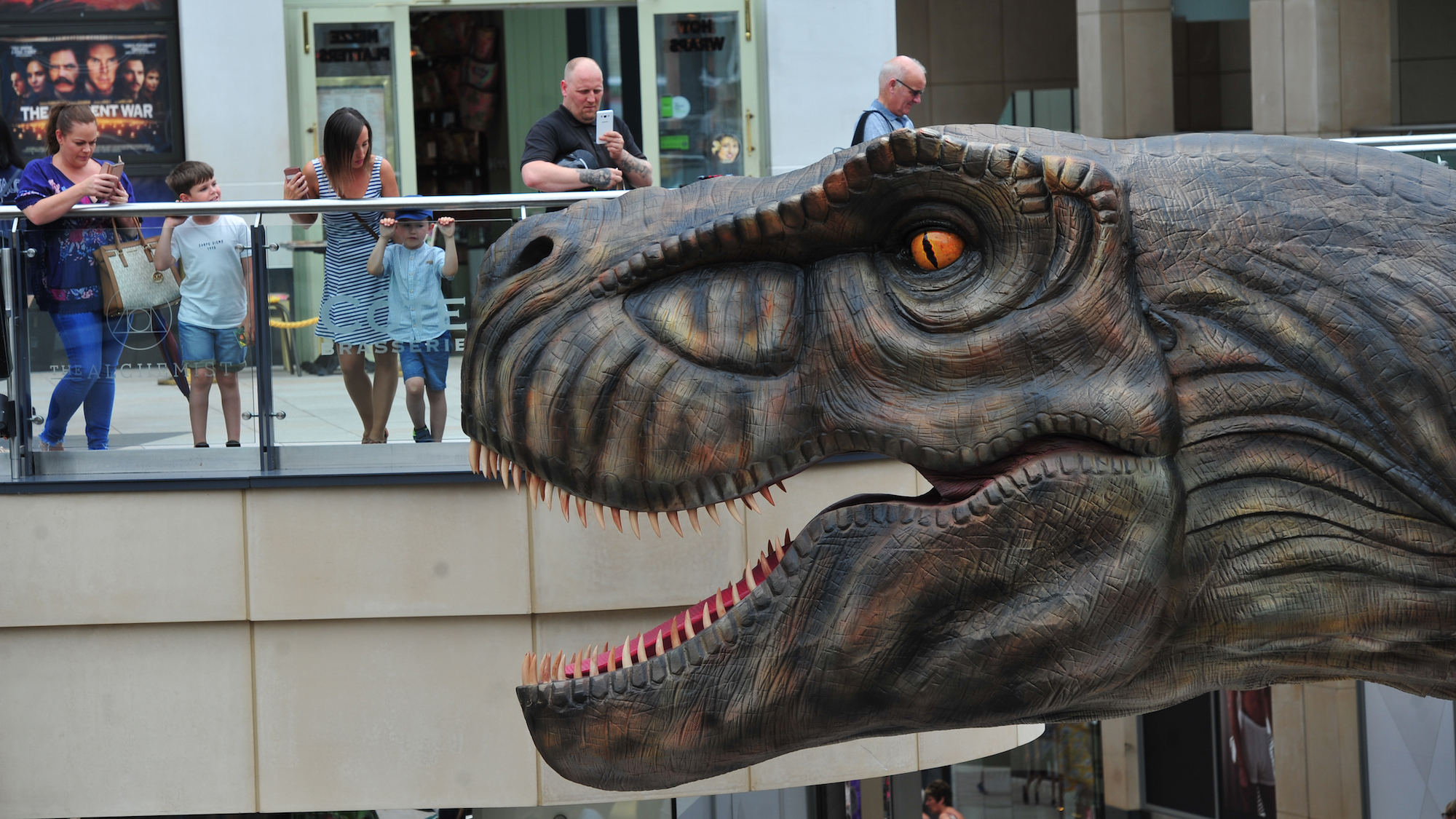 When it comes to summer in Leeds, the Jurassic Trail is always a big draw. But rather than rest on their laurels, organisers LeedsBID have decided to make it better than ever before. That means some new dinosaurs out of the 12 to track down, loads of events and even a dinosaur expert on-hand so you and the kids can learn more about these extinct giants. It runs from Saturday 30th July to Sunday 4th September 2022, so check it out before it’s gone.

The T-Rex at Trinity Leeds is always one of the biggest draws, and this fearsome 15-metre long beast will be roaring and swinging his tail – cue squealing kids (and a fair few adults). Step inside Trinity Kitchen and order up some food in the company of Nasutoceratops, who were in the recent Jurassic World: Dominion film. It’s a bit smaller at 4.6 metres, but watch out for those horns!

It’s not the only shopping centre to be taken over by these amazing animatronic animals. Head to Victoria Gate to be greeted by the Amargasaurus, a three-metre tall behemoth, while Victoria Quarter is home to the familiar Triceratops. Heading to the Merrion Centre? Look out for the Brachiosaurus. Double back to the St. Johns Centre and you’ll be confronted by Ruyangosaurus, a 10-metre long sauropod. 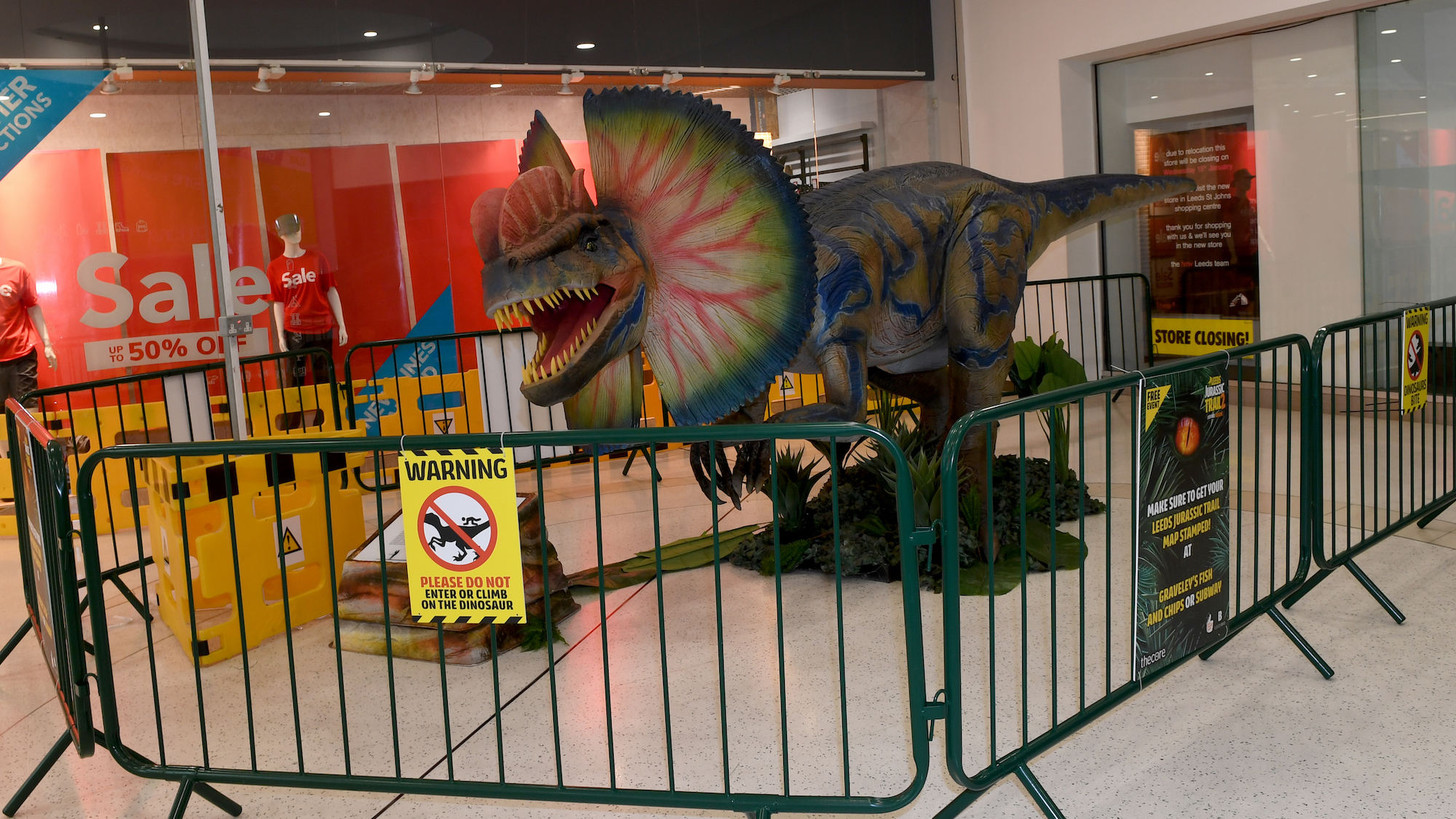 Want to see every last one? You’ll find a Stegosaurus in The Core, while a Baryonyx has set up stall in Kirkgate Market. Heck, you’ll even find Parasaurolophus in the Corn Exchange, while those hopping off their trains at Leeds City Station might get their tickets inspected by an Atrociraptor, a savage dinosaur that also starred in the latest Jurassic World movie. A word to the wise – there’s no point asking it for timetable information.

There are also dinosaurs to be found at two brand new locations. The SOYO neighbourhood close to Quarry Hill will be the site of a Dilophosaurus, with its skull crest. Don’t worry, though – they don’t spit venom in real life, only in Jurassic Park. Thrillingly, a Spinosaurus is rumoured to be lurking in the waters of the Leeds and Liverpool Canal at Granary Wharf, the first time the trail has gone aquatic!

The custom-made dinosaurs are all constructed by Only Dinosaurs, makers of the most life-like dinos you’ll ever see, with incredible attention to detail. Take as close a look as you dare as you tick them all off – pick up a trail map and make sure you get it stamped at every dinosaur you visit. There’s a place to get your map stamped close to each one, but if you can’t find it, you can get stamps for all of them at the customer service desks in both Trinity Leeds and Victoria Gate. 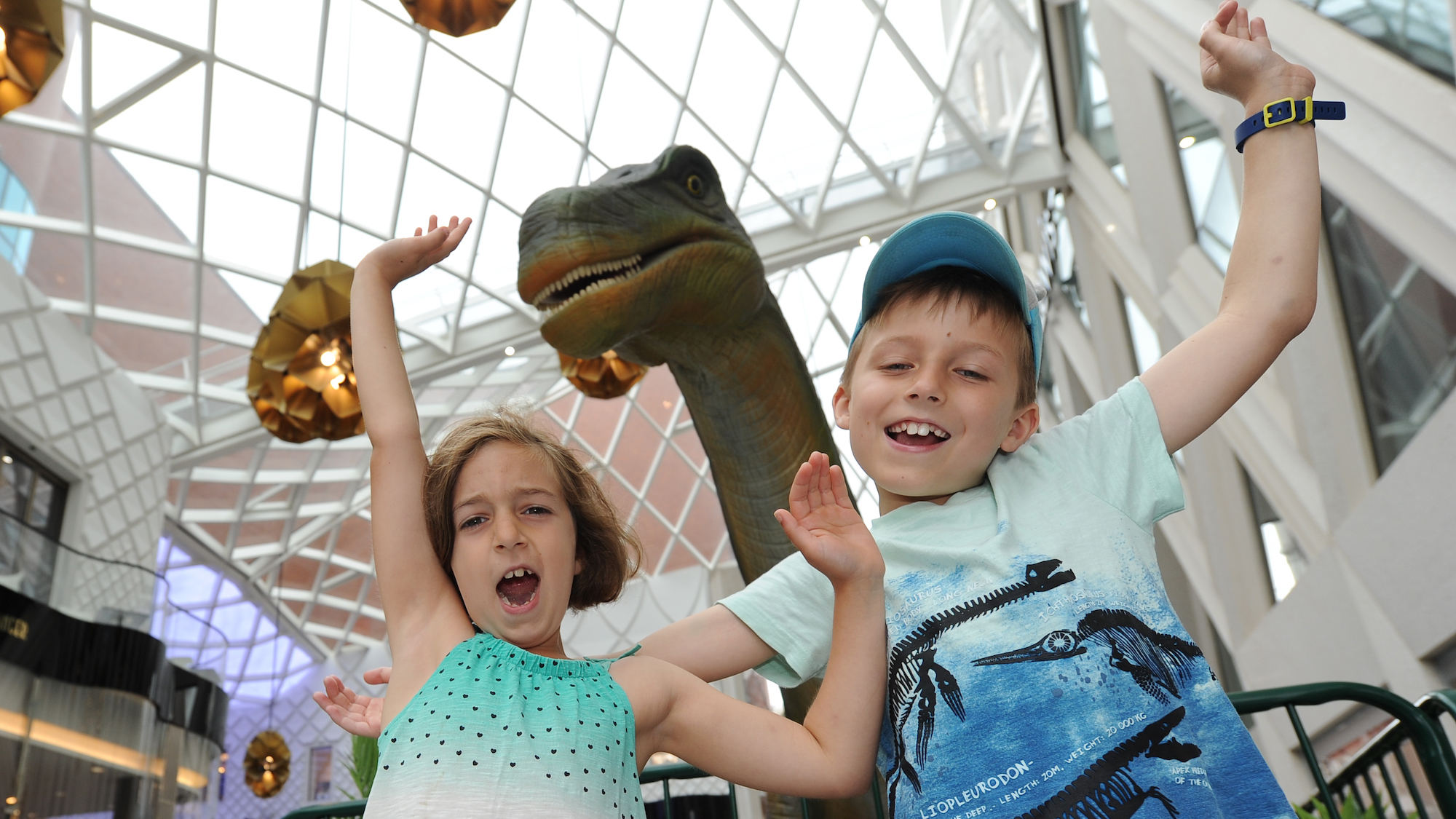 Making the whole event bigger and better, this year sees some major new additions. Andy Day, the expert behind the CBeebies show Andy’s Dinosaur Adventures, will be providing fascinating facts about the prehistoric beasts on digital displays across the city. There’s some great weekend activities for toddlers on the fourth floor of John Lewis, with interactive dino story sessions and a hatchery where your little ones can see even littler dinos coming to life.

For wannabe Jurassic rangers, every Saturday and Sunday will see free Base Camp Ranger training sessions, with your little ones trained to tame dinosaurs. Briggate will also come alive with walkabout dinos and live entertainment at the weekend. As if that’s not enough, there’s also themed crafting, balloon modelling, face painting, LEGO building and more in Leeds Kirkgate Market.

Did we mention it all costs precisely nowt? Yep. “Bigger, better and more to see for free will be the Leeds Jurassic Trail experience this year,” Andrew Cooper, Chief Executive of LeedsBID told us. “Installing a dinosaur in the canal is ambitious and all those involved in Leeds Jurassic Trail have gone over and above this year.” Time to get on the trail and hunt down those pesky dinosaurs!