Calling all geeks – now you’ve got a place to call your own. 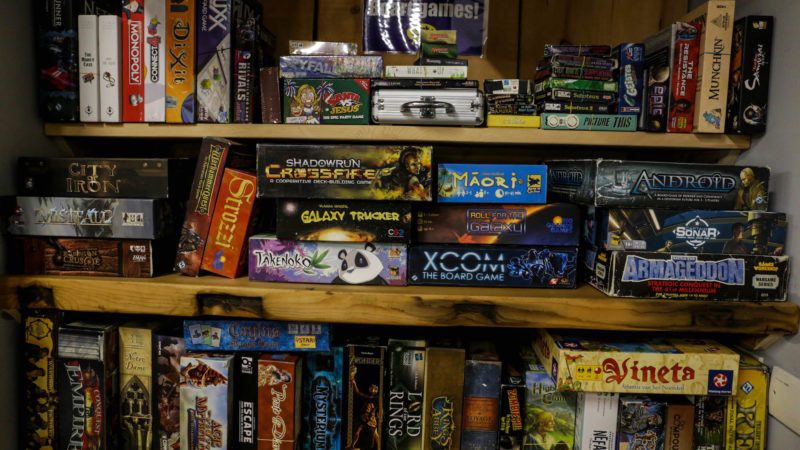 Central Arcade is now home to a new social gaming space where you can play 100s of board games, with everything from Monopoly to 7 Wonders.

It’s 18 months since Bird & Beast closed its doors, leaving a prime piece of real estate empty, but now Central Arcade has a new resident and it’s very different from what came before. Geek Retreat is a social gaming space where you can play everything from war games to board, role play and collectable card games, all in a relaxed, welcoming environment.

It’s not the first of its kind, you’ll find them in Birmingham, Newcastle and Glasgow, but it’s the first time the concept has been brought to Leeds. Manager Andrew Morton-Foggon saw an opportunity to escape his humdrum IT job and throw himself into something he was really passionate about, so he applied for a franchise. He’s a self-confessed geek, after all.

“I have been a geek for most of my life and have been involved in various gaming groups and societies since I was a teenager, so when my wife saw an advert for Geek Retreat franchising, she suggested we look into it,” he explained. “Leeds has a great Geek community but no gaming cafes, so it seemed like the perfect choice.”

It’s part cafe, part shop and 100% obsessed with gaming. In the store, you’ll find a vast array of geeky goods. They’ve got Magic the Gathering, Pokemon, Yu-Gi-Oh and Final Fantasy boosters, deck boxes and sleeves, as well as nerf guns for those of you who like to get a little more hands on. That’s coupled with a stunning array of board games, with everything from quick and easy games to 4-hour marathons.

You can buy it all to take home, but why should gaming be relegated to your living room? At Geek Retreat you can get together with friends and play to your heart’s content. They have over 100 tabletop games for you to choose from and they’re all free to play. Not a gaming pro? Don’t worry, they have classics like Connect 4 and Picture This, alongside the ultimate geek-out games.

There’s ‘Lord of the Rings’, a co-operative game that will see you working with your fellows to destroy the ring once and for all. Or you could try ‘Escape from the Aliens in Outer Space’ – first decide whether you’re an alien or a human, then battle your mates as the humans try to reach the escape hatches and the aliens hunt them down. The range on offer here is so diverse that you could go from zombies to crusades in the blink of an eye.

But it’s not just board games. They’ve got retro consoles, so you can relive your youth with Sonic, Mortal Kombat and all the other games you loved so much. Or why not have a go on the arcade games? You can see if you can beat the high score on their pinball machine. And if you want something a little more sedate, they’ve got Manga comics on-hand too.

That’s their ‘everyday’ offering, but they also have a packed calendar of events to help you meet new people and up your game. From simple meet-ups to nights dedicated to Final Fantasy, Shadespire and Yu-Gi-Oh duels, it’s all going on.

While you play, you’ll obviously need refreshments and Geek Retreat has it covered. The cafe serves tea, coffee and energy drinks to help you keep your concentration through those mammoth gaming sessions, or you could always treat yourself to one of those almighty milkshakes. Chocolate Thunder is the ultimate indulgence – it’s made with ice cream, Nutella, Maltesers, Oreos and Chocolate. And if you get hungry, you can tuck into classic snacks like pulled pork nachos, toasted ciabattas and loaded burgers. No sticky fingers on the board games though!

Geek Retreat is a place where you can totally geek out, safe in the knowledge that the person next to you is doing exactly the same thing – and it’s going to be very popular indeed with the city’s gaming community.