Get the lowdown on Leeds’ new retro gaming venue. 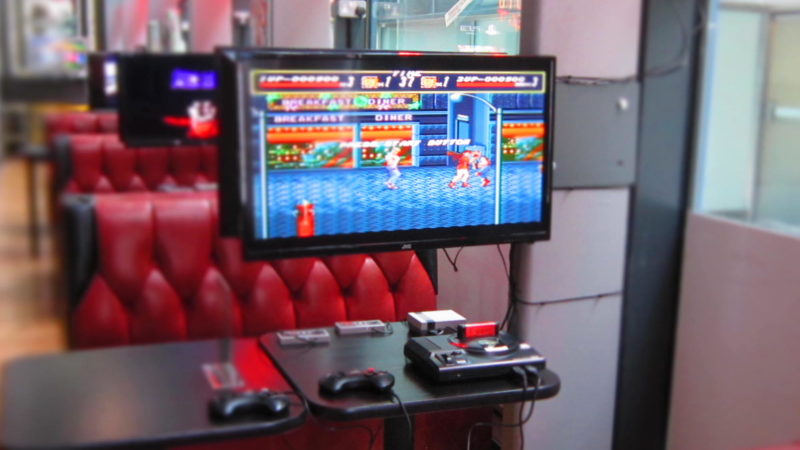 Now you can turn your love of retro gaming into an awesome night out – introducing Press Start Gaming Zone.

If you love retro gaming, check out Press Start Gaming Zone. It’s the latest opening in Trinity Leeds and it’s loaded with old school consoles, ready-to-play. It’s the brainchild of owner Stephen Smith, who’s local Retro Games Nights have been hugely popular in recent years – he wanted to take the idea even further and find a permanent space for old-school gaming in Leeds city centre.

It’s open every weekend, from Friday through to Sunday, and it’s a fantastic place to go to relive the good old days of video gaming. You pay on the door and it’s £3 an hour, but man is it worth it – there are 16 vintage games consoles inside and over 2,000 games for you to choose from.

If you want to go really old-school, head back to the late 80s and early 90s – they’ve got the original NES and SNES, so you can play Super Mario Bros, The Legend of Zelda and Super Mario Kart. The same goes for vintage Sega consoles like the Mega Drive and Saturn – play everything from the first three Sonic games to classics like Streets of Rage, Virtua Fighter and Sega Rally.

If you’re more of a late 90s or early 00s gamer, you can have a go at Crazy Taxi on the Sega Dreamcast, GoldenEye on the Nintendo 64, Halo 2 on the Xbox or Crash Bandicoot on the PlayStation 1. You can even battle it out on popular games like FIFA and Guitar Hero on the PS2 and Xbox 360. But that only scratches the surface of an extensive selection that will make you want to turn your hour into two.

Since Stephen’s a self-confessed expert, we asked him to give us his top tips, “There are so many games to choose from, but my 3 personal favourites are Point Blank, Guitar Hero and Street Fighter 2. These are three games I never get tired of. Point Blank is a game you can play over and over again trying to beat your high score, and it’s the same with Guitar Hero. Street Fighter 2 is possibly the best one-on-one fighting game ever made, I have been playing it for nearly 20 years!”

They don’t just have games consoles – they’ve also converted the old top-floor bar in MEATliquor into a mini bar-top arcade station. You can choose from two arcade gaming cabinets which have hundreds of games ready to play, from Pacman to Space Invaders. Hell, you can even have a go on the Tekken Tag Tournament system, which runs the original arcade software.

In the coming months, you’ll also have the chance to compete against your fellow gamers. They run regular tournaments and gaming challenges. So if you think you’re unbeatable at Halo, Mario Kart and WWE Smackdown vs Raw, you can put your theory to the test. They also run special themed events, where every console in the venue is taken over by a certain type of game – for example, on Sunday Fight Club it’s all about fighting games.

So if you’re an avid gamer or just reliving the good old days playing vintage games, Press Start might just become your favourite place in Leeds – why not pay them a visit and have a few goes?