The Best Caves in Yorkshire

Explore to your heart’s content with these amazing caverns. 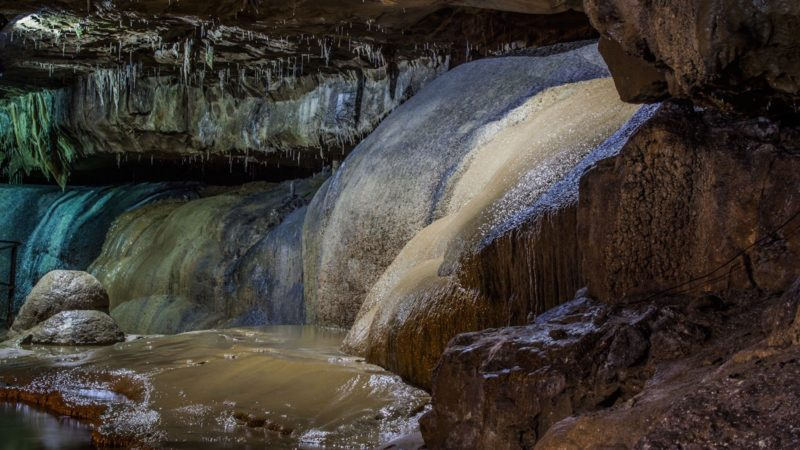 Whether you’re an experienced spelunker or a complete novice looking for picturesque rock formations and unexpected adventures, these caves will tick all the right boxes. They’re the best in Yorkshire, a motley selection of underground caverns worth going out of your way for. Some might be a simple stroll round, but other might require expert assistance, so make sure you’re fully aware of your experience level before attempting them.

For a caving experience without the risk or the effort, try one of these show caves. They’ve been tunnelled out, signposted and fitted with walkways, so you can wander around and see nature beauty for yourself.

The longest show cave in Britain, White Scar Cave is one of the Yorkshire Dales’ most impressive attractions. It’s over 100 metres long, up to 30 metres high in places and takes around an hour and a half to fully explore from start to finish, with guided tours all year round. Named after the streaks of limestone above the cave’s entrance, the first thing you’ll see inside is the enormous waterfall, with 55 tonnes of water crashing over it every minute. Now that’s what we call a cave.

Credit: Malcolm Neal licensed under Creative Commons for commercial use.

One of the UK’s oldest show caves, Ingleborough Cave has been enchanting visitors with giant stalactites and Ice Age relics since 1837. They’ve worked to make the natural wonders accessible to everyone, so the smoothed out floor can fit everything from a wheelchair to a pram on the half-kilometre path. Along the way, you’ll see calcite dams, amazing rock formations and even the remains of a woolly rhinoceros, discovered by a local potholing club in 2001.

First discovered in 1860 by miners looking for lead seams, these 500,000-year-old caves were soon put to use as a tourist attraction and visitors were able to explore for a just shilling. These days, the show caves have been declared a site of special scientific interest (SSSI) and had lighting and fairy trails installed to make them fun for the whole family. Keen potholer? There are plenty of deeper caves as yet unexplored, just waiting for a helmet and a rope to explore.

Magic and science combine to create a family-friendly treat at Mother Shipton’s Cave. Born in the cave, Mother Shipton was a famous 15th-century prophetess who predicted the Great Fire of London and even the end of the world. She was labelled a witch for her predictions and her legend was enhanced by the nearby Petrifying Well. The well’s high mineral content covers anything in the water in a silt coating, which looks like stone. Knaresborough townsfolk believed the well was magic, and it became England’s oldest visitor attraction. Today you can buy petrified teddies and more, just don’t drink the water!

Credit: Dave Dunford licensed under Creative Commons for commercial use.

Once a Victorian show cave, Yordas Cave is now the most stunning free-to-visit cave in Yorkshire – all you need to explore it is good footwear and a torch. No-one seems to agree on where the name Yordas came from – some argue it’s a Nordic giant, while others suggest it comes from the Nordic phrase ‘Jord Ass’, which means Earth stream. The truth is probably somewhere in between – there’s a stream running through the 50-metre-wide main chamber and a roaring waterfall in a side cave that sounds like a far-away giant.

If you’re up for a challenge, why not try your hand at proper caving? It requires skill, training and rigorous safety measures, but you can learn the ropes with one of the local caving clubs, including the University of Leeds Speleological Association, Craven Pothole Club, Northern Pennine Club, Morley Potholing Club and the Yorkshire Subterranean Society.

Credit: Steven Skilbeck licensed under Creative Commons for commercial use.

If you’re a beginner to potholing, Great Douk Cave is the perfect gentle introduction. The cave’s entrance is next to a beautiful little waterfall, leading along a long underground passageway. Follow the stream passage along as far as it goes, where you’ll find your biggest challenge, a moderate squeeze, before a surprise exit out into daylight at Middle Washford caves. Wetsocks are recommended as it’s often wading-height water, and bring a change of clothes in the car.

Credit: Steven Skilbeck licensed under Creative Commons for commercial use.

As Caseker Gill flows toward the River Wharfe, you’ll discover Dow Cave, a post-glacial stream passage. It starts off nice and gentle with nothing too strenuous in the first third, so it’s ideal for novices to get a taste of cave walking. Just make sure you’ve got lights, waterproofs and a helmet. Deeper in, where it connects to Providence Pot, it gets very strenuous with rapid water changes. Essentially, it’s experts only from that point on, so don’t get caught out.

Dubbed the ‘finest abseil in Yorkshire’, Alum Pot is an enormous 100-metre deep pot hole on the slopes of Ingleborough. On the approach, a stream rushes past and tumbles into the hole, so you’ll be descending with a gushing torrent of water alongside you. You’ll be in good company, as keen cavers have been abseiling into Alum Pot since 1848. Once you’re down there, there’s a whole labyrinth of caves to explore, from stream passages to the famous ‘cheese press’ squeeze.

Excalibur Pot is the only known major cave on the North York Moors. It was first discovered in 1981 by two divers exploring Bogg Hall Cave. They noticed there was room to break through above the river level, but it wasn’t until years later that the York Caving Club managed to create an entry point. Now everyone with a permit can enjoy Excalibur’s incredible rock formations and Hutton Beck’s dry stream beds, it’s that challenging, so you need to be an experienced caver to try this one. There’s also a serious chance of flooding, so this is a good weather trip only.

Excalibur Pot, Kirbymoorside, Hutton-le-Hole, North Yorkshire, YO62 6UQ. A permit for entry is required from the Council of Northern Caving Clubs (CNCC) due to it being on a private shooting estate.

Right in the heart of the Yorkshire Dales National Park, Hull Pot holds the record for England’s largest natural hole at 300-feet deep. It’s a classic pot hole that’s suitable for all abilities, as long as you go with a semi-experienced caver. The pitches are well placed, but quite exposed, so be prepared to get wet going down. Once you’re in, the scenery is spectacular, with light filtering down through the hole above. There is a high risk of flooding though, so make sure you go on a dry day. A word of warning – in heavy weather the cave can fill completely, so make sure the conditions are good before you go in.

Not only is Gaping Hill the Yorkshire Dales’ most famous cave, it’s also Britain’s biggest underground chamber at 650 feet – and it promises one of the rarest potholing experiences on Earth. Fell Beck Waterfall cascades into the cave at twice the height of Niagara Falls, so the entrance to the cave is off-limits even to the most experienced cavers without risking life and limb. Off-limits, that is, except for twice a year. Every May and August, local caving clubs from nearby Clapham rig up a winch to allow a few lucky people to explore the cave below. If you get the chance, it’s utterly awe-inspiring.