What Would Happen if You Seduced a Religious Fanatic to Make Your Ex Jealous? Find Out in This Ever-so-slightly Crazed Opera

From 19th century Sicily to 1970s Poland, it's all change for Cavalleria rusticana. 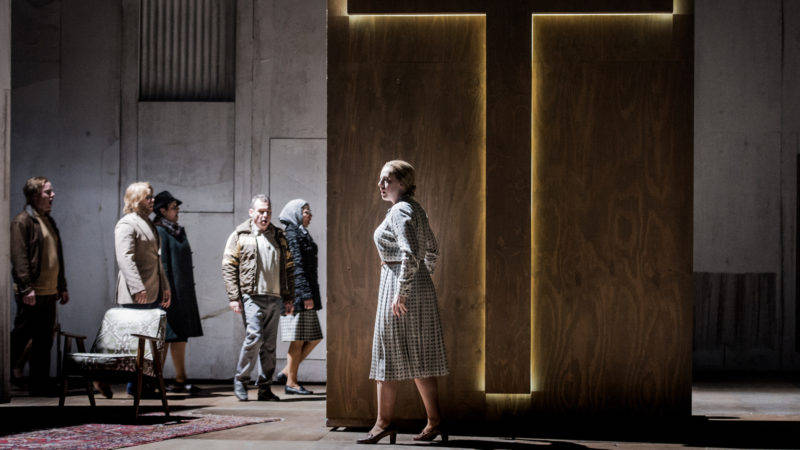 Watch as one woman’s life unravels on stage, taking her sanity along with it – Cavalleria rusticana is a story of religious mania with tragic consequences.

Cavalleria rusticana has become known as the work that ‘invented the Mafia’ – and we all know the music because Francis Ford Coppola used it in the conclusion of The Godfather Part 3. But you’ve never seen it like this before because Opera North’s latest production takes a very different approach to the iconic Italian opera. They’ve swapped 19th century Sicily for 1970s Poland, showing the world through the eyes of a woman whose obsession with religion has loosened her grip on reality.

It all starts with Turiddù. When he returns from war to find that his fiancée Lola has married someone else, he decides to take revenge by seducing a woman in the village called Santuzza, but his ex is still in love with him and so they start an affair. In doing so, he seals his own fate, because he breaks an unwritten code of honour. Seeing those Mafia links yet?

The novella by Giovanni Verga is very much focused on the man, but the opera is more interested in the wronged woman, Santuzza – and that’s what drew Director Karolina Sofulak to the production, “I was interested in showing the fragmented, distorted reality as seen through the eyes of a woman gripped by religious mania and driven insane by unrequited love, delusions and hardships of everyday life in a rather dreary and unsympathetic community.”

“I was quite surprised when it dawned on me that my own country was the perfect alternative to the original Sicilian setting – the answer was staring me right in the face. Poland and Sicily share a history of oppression, foreign domination and economic hardship, as well as strong faith in the tenets of Catholicism,” she told us. “I chose the late 1970s, because at that time the reality was particularly bleak – Poland was suffering under communism and its downtrodden citizens turned towards the Church with particular fervour. I hope that against that rather stark and raw background our story of passion, religious mania, jealousy and vengeance will have a more immediate effect on the audience.”

That one decision changed everything. It was like she’d unlocked the shackles and released herself from every version of Cavalleria rusticana that had come before. Free from the trappings of 19th century Sicily, she set about reimagining the characters as she thought they should be.

Take Turiddù’s competition, for example. Alfio is the man who marries Turiddù’s fiancée, and he usually gets a bad rep – but not in this production. “On stage, he’s traditionally portrayed as a brute and a bully,” Karolina explained. “I see Alfio as a family man who works hard to build a perfect home for his new wife, who is genuinely devoted to her and who is a victim, rather than a villain, in our story. Sure, he is ultimately driven to violence when his dreams are shattered, but the act is not committed lightly – his life, as is the case with everyone else who got caught in Santuzza’s destructive vortex, is forever destroyed.”

It’s not just Alfio either. Lola is given new life in Karolina’s story too. Between us, she usually comes across as a bit of a tart, but here she has real character. She loves Alfio, even if not with the same passion that she feels for Turiddù, and she fights the urge to go and betray him – it’s not enough to change the course of events, but it makes the tragedy of it all the more poignant.

And tragedy there will be, because Turiddù couldn’t have chosen a worse person to seduce. Santuzza is a devout Catholic and she sees her night with him as her fall from grace – only by marrying him can she be redeemed, but he’s too in love with Lola to pay her second thought. So she does the only thing she can think of to separate them – she tells Lola’s husband. Needless to say, it backfires and Turiddù’s blood becomes the blood of the Easter sacrificial lamb in her frenzied, broken mind.

This is an incredibly emotional opera, set to a tense, unrelenting score by Pietro Mascagni. Just when you think it’s reached its pinnacle, it hits you again, but it also has rich melodies and soft heartache-inducing mezzos, so you’re in for a real emotional rollercoaster ride, packed into just 75 minutes.