What's real and what's an act? It's almost impossible to tell. 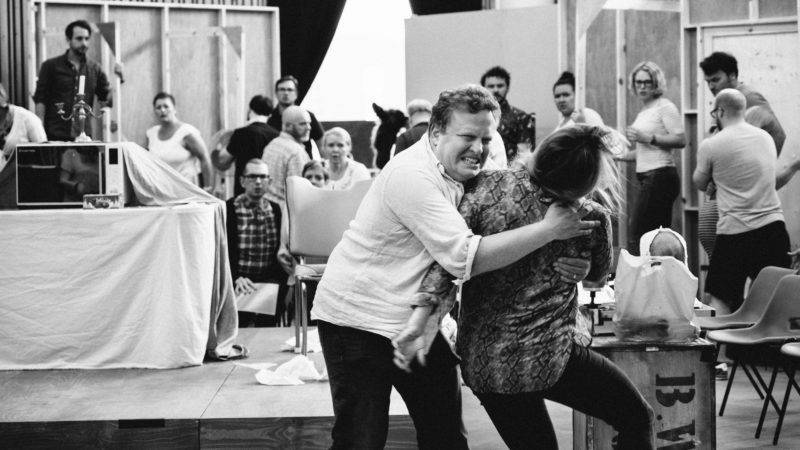 Ever wanted to be a fly on the wall of one of the city’s most prominent cultural institutions? Opera North’s latest production will let you do just that, with explosive consequences…

When you see an opera come to life on stage, it’s often hard to believe that just weeks before, the singers hadn’t even started rehearsing. But you might find it a little easier to imagine this season because Opera North’s new production of Pagliacci will take you into the rehearsal room for a tense drama that blurs the lines between performance and reality.

Leoncavallo’s Pagliacci tells the story of a travelling theatre troupe, a family of performers whose lives are so intricately entwined that when one betrays another, it has the potential to destroy them all. And believe it or not, it’s actually based on a true story. Leoncavallo’s father was a lawyer and he worked on a case where an actor killed another man on stage in a fit of jealousy.

It became the inspiration behind Pagliacci, an opera that sees a troupe of theatre players arrive in a small village to put on a play. The head of the group begins to suspect that his wife, the leading lady, is having an affair with one of the villagers – what follows is 75 minutes of passion, jealousy, rage and violence with a shocking conclusion.

It sounds as simple as a soap opera, but Pagliacci comes with a twist. Director Charles Edwards has changed the setting, turning the theatre troupe into an opera company. In this version, the players are opera singers, the villagers are production staff and the show is the final rehearsal room run-through before opening night – which means you’ll get a unique glimpse into the creative process.

It’s not their actual rehearsal room, that would be a little tight given the size of the audience, but it is a fairly close replica – a simple, no frills space with props, production staff and a makeshift stage. They’ve kept it as close to the real thing as possible because while Edwards may have updated the setting, he still wants to stay true to Leoncavallo’s original vision for Pagliacci.

“We want to be as un-theatrical as we can be,” Edwards explained. “We’re trying to give the sense of a ‘fly-on-the-wall’ documentary about putting on a one-act opera at Opera North, so there will be no artifice in terms of costume, setting, or lighting. Leoncavallo wanted to present a ‘slice of real life’ and that’s what it will look like. In a way, we see ourselves on stage – real people, like the audience, like you and like me.”

And so as the tension rises and the rehearsal begins to descend into violence and chaos, you may find yourself wondering – is this real? Is this really happening or is it part of the act? The beauty of Pagliacci is that you never really know.

“I think the great thing about this piece is that you shouldn’t know what is going to happen at the end, even at the end,” Edwards confessed. “That in a way is what the whole thing is about. It’s about seeing something on stage and not knowing if it’s reality or if it’s been directed – has it been carefully put together, has there been meticulous attention to detail in the staging and the movement or is it completely out of control? I want the audience to feel like they have seen something they didn’t expect to see, but I can’t tell you any more than that or I will ruin it.”

If you want to find out what happens at the end, you’ll have to go and see it for yourself, and you can bet your bottom dollar that you’ll hear some incredible songs along the way. From Tonio’s desperate (and surprisingly direct) plea to the audience to Nedda’s soaring song to the birds and Canio’s grim determination that the show must go on in the famous ‘Vesti la giubba’ – the music is as big and melodramatic as the action on stage.