Take in murals, sculptures and poems etched into the pavement on our art trail of Leeds. 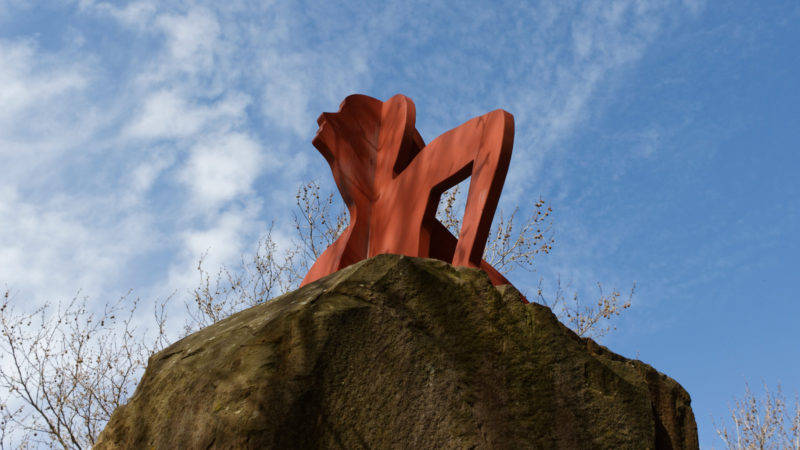 From the moment you arrive at the station, you can begin a public art trail of Leeds that will take you through the city centre, past traditional and unusual art as you make your way towards the outskirts of the city centre. As you go, you’ll see the work of local artists, sculptors and illustrators, as well as that of the critically acclaimed legends of Britain’s Art Nouveau scene.

As you leave Leeds Train Station, you’ll come face-to-face with five 2-metre tall letters spelling out Leeds. Each is filled with unique illustrations by local artists, which change regularly to create a constantly evolving display of the city’s creative talent. Right now, Leeds College of Art graduate Abi Moffat has taken over the letters, taking inspiration from her own experiences of Leeds to show off a side to the city that others can relate to.

Athena Rising is the tallest mural in the UK and you’ll find it just outside the doors of Leeds Train Station. At 46.8 metres high, it’s about the same height as the Statue of Liberty and towers above Leeds from the Platform Building which is attached to the station. It’s the work of Manchester-based graffiti artists Nomad Clan who have put the city’s mascot, the owl, at its heart. Alongside the massive centrepiece, they’ve added a moon and a crown, which represents the two artists, Cbloxx and Aylo.

White Cloth Gallery has a dark side, a larger than life black and white cyborg called Raiden that the video gamers among you ought to recognise from Metal Gear Rising. Although Japanese designer Yoji Shinkawa originally created him, it was London-based mural artists EndOfTheLine who brought him to life with a lick of paint here in Leeds. It’s part of a set, but only our one still exists, with the others in Liverpool and London now painted over.

While The Black Prince has no historic connection to the city, he’s become one of our most iconic bronze statues, taking pride of place in City Square since 1903 – when Leeds officially became a city. Our adopted horseman was seven years in the making, as artist Thomas Brock was forced to send him to Belgium to be cast in bronze since no British foundry was large enough to handle it. The statue was towed into Leeds on a canal boat, and hoisted onto a plinth adorned with lions’ heads and battle scenes.

Eight bronze Victorian lamp bearers flank The Black Prince, representing different times of the day from ‘Morn’ to ‘Eve’. The Drury Dames sparked public outrage when they arrived in 1899, simply because of how little they’re wearing. Created by Sir Alfred Drury, again to mark Leeds’ status as an official city, the statues became a key part of the British Art Nouveau movement and are therefore a worthy stop on your public art trail across the city.

These studious looking chaps, clutching books, scrolls and magnifying glasses were also created for City Square’s grand opening in 1903 – though they’ve not always been lined up as they are now in front of the The Old Post Office building. Henry Charles Fehr sculpted four pioneers in bronze, each of which shared the city’s industrious spirit. You have James Watt whose steam engines powered the Industrial Revolution and Joseph Priestly who discovered oxygen (or at least published first), among local clockmaker John Harrison and Bishop Dean Hook.

City Square is a goldmine for classic art fiends. So turn your eyes to The Old Post Office building, which in the present day is home to Restaurant Bar & Grill, to see all eight of Henry Tanner’s statues. There are eight women in total, four made in terracotta and four carved in stone, which you’ll find just above the two entrances. They’re reading, writing, and clutching scrolls – all forms of communication, which is more than a little apt for a former post office.

Is it showing a single bird’s journey skyward or an entire flock taking wing? Lorne McKean’s bronze sculpture explores movement, using these elegant birds as the subject. They’re suspended in the air, in an 8 metre high spiral – look out for individual birds around the building, which are even more detailed than the main attraction. Flight was commissioned by Norwich Union, who have a branch within the building, and adds a little eye candy to your morning commute.

This one is well hidden – on the walkway between York Place and Park Place, graffiti artist Russell Meeham has created a huge new mural that is inspired by Leeds’ cultural heritage. It’s a huge elephant inspired by armour on display at Royal Armouries. There’s a ring of white roses around its neck, a nod to the white rose of Yorkshire, and it carries our historic mills on its back.

It’s finally time to leave City Square behind and head to Bond Court. You’re looking for four life-size iron figures – an old flat cap wearing Frenchman crouched mid-throw, and a Yorkshire family of three leaning against the lamppost, all transfixed on the game. Sculptor Roger Burnett created them, but it was the Lord Mayor of Lille, Leeds’ twin city, who unveiled them at the turn of the millennium to mark the annual Northern Pétanque Colliers CRE Cup. If you fancy a free game while you’re here, ask for the balls in Costa – but remember, you’re only half way through your art trail across Leeds.

Time for something a little different – the terracotta frieze on Abtech House, carved by Leeds-based stonemasons Joseph Thewils & Co. some 135 years ago. This was a branch of West Riding Union Bank in the 19th century, who illustrated their global connections and wealth through art. You have Minerva, the Goddess of Commerce slap bang in the middle of the action, while to her left, native Americans and builders forge a new road across the continent, and on her right, men from across the globe unload cargo ships and move hay bales. The longer you look, the more you see, from doves carrying olive branches to steam trains and palm trees.

One of Leeds’ most photographed sculptures awaits in Trinity Leeds, ‘Equus Altus’ means ‘high horse’ and that’s exactly what you get – a sack-carrying Cleveland Bay packhorse with a bell around its neck, stood on a platform 15-metres above you. It honours the real ones that once carted goods around the city. Glaswegian artist Andy Scott spent ten months hand-welding small rectangles of steel together to create the shimmering mosaic-like effect he’s renowned for – just in time for the shopping centre’s grand opening in 2013.

It’s the Goddess of Commerce and Weaving again, but this time Minerva is on Briggate. It’s a thoroughly modern, 8-metre tall sculpture, also by Andy Scott, with fabric draped over her outstretched arm. At night, the statue is lit up by lights that change colour, from red to green. The three stars in her fist symbolise Leeds’ first mayor, Sir Thomas Danby’s coat of arms, while her owl mask serves two important purposes – referencing the city’s beloved mascot and celebrating Leeds’ thriving theatre scene.

Brian Clarke’s stained glass windows are on display all over the world, from Kazakhstan to Japan – but the best is arguably here in the Victoria Quarter. Created in 1989, this 750 square metre patchwork of coloured glass is another vivid nod to Leeds’ textile industry, with contrasting sections of burnt purple, orange, yellow, green and blue joined together for maximum impact. It’s the biggest stained glass window in Britain, and therefore an important stop on your public art trail through Leeds.

This next one is far less obvious, so you’ll need to do some searching to find it on Kirkgate’s ever-bustling pavement between Zara and Debenhams. But once you’ve spotted the poetry carved into the bricks below your feet, you’re in for a treat, because they bring poetry into the everyday, with the words of local writers Anthony Dunn and Peter Spafford. The etchings continue up onto the granite seats, so take a pew and enjoy the view.

Graeme Wilson’s 20-year old mural is a welcome injection of colour at the top of Call Lane. It’s a mammoth piece of public art which went on to win the Leeds Award for Architecture and the Environment. It depicts an interesting scene, with the Roman Goddess of Abundance, Victorian townspeople, fresh produce and a Cherub clutching a soon-to-be-filled bread basket – all on the side of an old chip shop. This is a total one off, sponsored by Leeds Corn Exchange, which you’ll also spot in the foreground of Cornucopia.

Under her pseudonym ‘Mutiny’, Jane Laurie painted this pair of magnificent Brazilian birds on a boarded up window, when she joined fellow environmental artists at The Gallery at Munro House’s ‘Human Nature’ exhibition. If you’re thinking that the blue Macaw parrots don’t look all that natural against the fluorescent orange, that’s precisely the point – their situation in the real-world is unnatural, they’re critically endangered through no fault of their own. And the eye-popping hues give you no choice but to take notice and recognise the fact.

Out of the Earth

The welcome party on Quarry Hill is an intriguing duo of red-painted metal sculptures, hoisting themselves out of mighty columns of Woodkirk Yorkstone, as they’ve done since Leeds City Council commissioned London-based artist Ray Smith to create them in 1995. They’re all the more impressive, towering above you in the flesh, which is why a small detour is in order on your public art tour of Leeds.

Leeds Kirkgate Market has spruced up the walls around their outdoor market with a series of giant murals that shout ‘Hello & Welcome to Leeds’ to folk fresh off the bus. It’s the work of Nathan Evans and celebrates community with a mix of typographical art and portraits. The London illustrator bought spray paint and supplies from nearby independent ArtOfficial, then applied it by hand in spectacular fashion for you to enjoy while on your art tour of the city.

Learn From Yesterday, Live For Today, Design From Tomorrow

Einstein’s famous quote has never looked more impressive. It’s been painted letter by letter on the derelict Lyon Works’ building by local artists Peter Barber, Stephen Malcolm and six Leeds College of Art students. ‘Learn From Yesterday, Live For Today, Design For Tomorrow’ fits perfectly onto the former clothes factory, alongside a few swirling flourishes, but best of all, each character is totally unique. From Celtic lettering to 3D and traditional type, it’s designed to pay homage to Leeds’ Victorian arcades, Kirkgate Market and Tetley Brewery.

Your art trail finishes at a former stone cutting mill. The Mabgate Mural was commissioned by the owner of Surmak Products in 1987, although it looks older, given the retro bus-stop and old-school horse and cart at the bottom. The characters in the windows are based on the people who worked there at the time, while the clock at the top counts the decades from 1880 to 1987. It’s a fitting end to your tour of Leeds, especially as Mabgate is now home Lady Beck Studios – why not see if they have an exhibition on?