Find out what’s on in the city’s theatres this month. 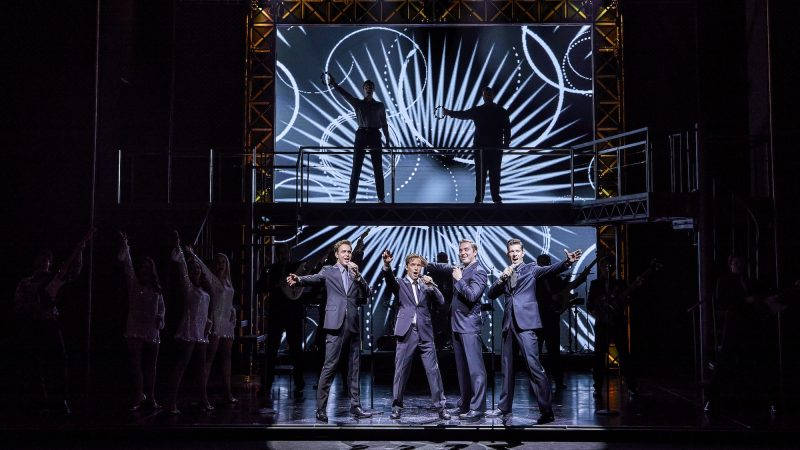 Want to know what the Leeds theatre scene has to offer this August? From family-friendly fun to unique productions, there’s something for everyone.

Deciding which Leeds theatre to go to in August won’t be easy because this month is packed with unmissable plays, musicals and opera performances. So before you buy your tickets, let us tell you what’s on at Leeds’ most legendary and little known theatres. Don’t forget to come back next month for even more ideas, because we’ll be updating this guide every month.

Jersey Boys. The global smash-hit is coming to Leeds Grand Theatre from Friday 26th July to Monday 5th August 2022, starring Michael Pickering as Frankie Valli. This Olivier Award-winning Broadway sensation tells the story of four young men from the wrong side of the tracks in New Jersey who came together to form the iconic 1960s rock group The Four Seasons.

Peppa Pig’s Best Day Ever. Peppa Pig is excited to be going on a special day out with George, Mummy Pig and Daddy Pig. Join them on a road-trip full of adventure at Leeds Playhouse on Wednesday 3rd August 2022. Get ready for an epic live show packed full of singalongs, interactive games and lots of muddy puddles – it really is going to be the best day out.

Prima Facie Screening. Jodie Comer makes her West End debut in the UK premiere of Suzie Miller’s award-winning play. A one-woman show, Prima Facie follows Tess, a young and brilliant lawyer who is forced to confront the lines between the patriarchy, proof and morality. The screening will be broadcast on the big screen at City Varieties on Thursday 4th August 2022.

PAW Patrol Live: Race to the Rescue. Everybody’s favourite pups are back to save the day once again. Join Ryder and the gang on their worldwide tour when it comes to first direct arena on Wednesday 10th August 2022 for an exciting, musical adventure. The whole family will enjoy this PAWsome musical performance, packed full of catchy songs and interactive dances.

Twelfth Night. Pack a picnic and head to Temple Newsam for a truly unique outdoor theatre experience. Set in a reality TV show called ‘Twelve Nights’, Heartbreak Productions’ take on the roles of Olivia, Viola and the others is a Love Island meets Big Brother spin on the classic. Enjoy Shakespeare hilariously re-imagined in this historic setting on Friday 19th August 2022.

Much Ado About Murder. It’s time to put on your detective cap and join Heartbreak Productions on Saturday 20th August 2022 at Temple Newsam for some totally outrageous open-air theatre. This original murder mystery will set five suspects under the spotlight, and it’s up to you to find out whodunnit. Feel free to bring a picnic and a blanket or two, but don’t look away for too long.

Derren Brown: Showman. The acclaimed master of mind control and psychological illusion returns to the stage with his all new one-man show. Derren Brown comes to Leeds Grand Theatre on Thursday 25th to Friday 26th August 2022, but the details of the show remain a closely-guarded secret – if you’ve seen him before, you know you’re in for a treat!

Silla. A story as resonant now as it was in 1713, don’t miss this outstanding new operatic production of Silla. Part of the Leeds Opera Festival, you can experience Giacomo Rossi’s Italian libretto at Leeds School of Arts’ new state-of-the-art theatre from Thursday 25th to Saturday 27th August 2022. The star-studded cast includes Idunnu Munch as Silla and Lucy Hall as Metella.

Bugsy Malone. Prohibition-era New York. A city full of mobsters, showgirls and dreamers. Rival gangster bosses Fat Sam and Dandy Dan are at loggerheads. Will Bugsy stay out of trouble long enough to help Fat Sam defend his business? Find out from Tuesday 30th August to Sunday 4th September 2022 as it comes to Leeds Grand Theatre for the first time ever.