The Weirdest Things That Ever Happened in Leeds

Find out just how gosh-darned weird Leeds can be. 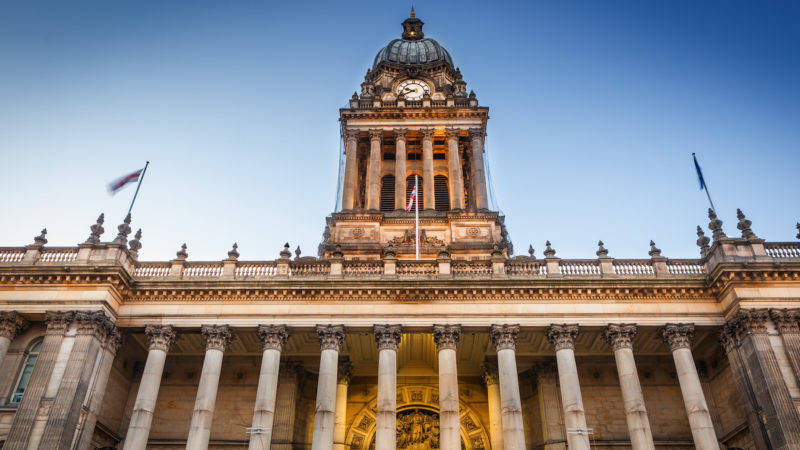 Alien abductions, hippo bones and gypsy curses – check out these loads of weird and wonderful stories from Leeds’ past.

What’s the weirdest story you’ve heard about Leeds? These 11 weird and wonderful tales are bound to be up there. From pubs with disappearing skulls to music venues opened by American spies, football stadiums cursed by travellers and policemen abducted by aliens, there have been some seriously strange goings on in Leeds over the years.

The sheep that lived on top of a factory

Imagine passing a factory and seeing sheep on top of it! Temple Works is a former flax mill that was once the biggest single room in the world, but what might not realise is that it used have sheep grazing on the roof. It maintained the humidity levels inside to prevent the linen thread from becoming dried out and unmanageable. Getting the sheep up there was no easy feat, in fact, they had to invent the world’s first hydraulic lift to make it happen. Credit: Gunnar Larsson licensed under Creative Commons for commercial use.

Do you believe in curses? Legendary Leeds United manager Don Revie certainly did. In 1971, with his team in a patchy run of form, he became convinced that Elland Road was cursed by a group of travellers who were moved from the site the stadium was built on. To rid the ground of the curse, Revie hired a ‘gypsy witch’ from Scarborough to perform a magic spell. They ended up as runners up in the league and won the FA Cup in 1972. Not bad.

The clock that never strikes midnight The Leeds Town Hall clock usually chimes at the top of every hour – except one. At midnight, it stays completely silent! It’s said that locals through that if the clock chimed at 12am, it would wake up the stone lions that stand on the plinths outside. That fear has turned into reason – they don’t let it bong at midnight now to let patients at LGI next door get some sleep. The one exception is New Year’s Eve when it bongs loud and proud.

The skulls that mysteriously disappeared The Crown and Fleece was a popular city centre pub with a deep dark secret. Until it closed in the 1930s, it had a pair of disappearing skulls. They originally belonged to two men avoiding subscription to the army during the Peninsula War. They suffocated in the hayloft and their skulls were embedded in sandstone on the back of the pub to deter other dodgers. The skulls disappeared in 1974, when then-tenants Ion Dyson moved to a new site, but were found years later in their new home on Buslingthorpe Lane.

The apartment block that was built upside down Have you heard about the apartment block that was built upside down? Then known as CASPAR, these flats on North Street were made with an innovative prefabricated design. I took just 37 weeks to construct, but within 5 years, the building had been evacuated. Why? Because they’d put heavy-duty wall panels for the ground floor on the upper levels, which combined with timber shrinkage, made the complex unsafe. After years left empty, they’ve been fixed and are known as North Crescent. Hippos once roamed the streets of Leeds and we have the bones to prove it. In 1851, workmen digging clay in a brick field in Wortley uncovered an almighty architectural discovery. 130,000-year-old hippo bones had laid untouched for all this time near where the Armley Grytaory is now. These Great Northern Hippopotamuses were believed to have perished during the last interglacial period – they’re now kept for all to see at Leeds City Museum.

The trick that nearly killed Houdini in Leeds

Harry Houdini made his name with death-defying tricks, but one misstep at his Leeds Empire Theatre show nearly sealed his fate. He attempted to escape from a padlocked water can filled with Tetley’s beer. This was a trick he’d done a million times over, but never with beer because he was teetotal. He didn’t account for the carbon dioxide in the airtight container, became completely drunk and passed out. Thankfully his vigilant assistant Franz Kukol saved the day and his life.

The policeman who was ‘abducted by aliens’

Alan Godfrey was a well-respected constable with the West Yorkshire Metropolitan Police, but that all changed on 28th November 1980 – while investigating reports of cattle wandering around the streets, he claimed to have seen a bright rotating object hovering above the road ahead. He couldn’t account for the 25 minutes after and came too with a split boot and an itchy red mark on his foot. After a hypnotic regression, he said he was medically examined by alien creatures, but after scrutiny, his claims were disproved.

The Jimi Hendrix gig that took place in an old synagogue

Jimi Hendrix is one of the most famous rockstars of all time. He played a famous show at the Odeon Theatre in April 1967, but his first Leeds gig couldn’t have been more unusual. It took place a month earlier when ‘The Jimi Hendrix Experience’, his powerhouse band, played a show in a converted synagogue in Chapeltown to less than 10 people. The night before, West Yorkshire Police had closed down a busier gig at the Gyro Club in Ilkley. From one extreme to the next!

Buffalo Bill is a legendary figure of the Old American West. He was a soldier, a bison hunter and a showman who shot to fame after serving in the Union Army during the American Civil War. He put together iconic Wild West circus-style shows that featured incredible horse tricks and parades. His show came to Cardigan Fields on Kirkstall Road in 1903, and after one night, it’s believed that Bill got into a scrap in a local boozer – and despite his reputation, he didn’t win!

The gig venue opened by a US spy The Warehouse is one of the most historic live music venues in Leeds. It’s hosted everyone from Oasis to The Stone Roses since it first opened in 1979 and is now back in business after a multi-million-pound refit. But it all started with a spy called Mike Wiand. The Nebraska-born music lover moved to Leeds after decades working as a real-life James Bond. He swapped secrecy for rockstars to set up the bustling night club which has become a local cultural landmark.