You’ve never heard Back to Basics like this before. 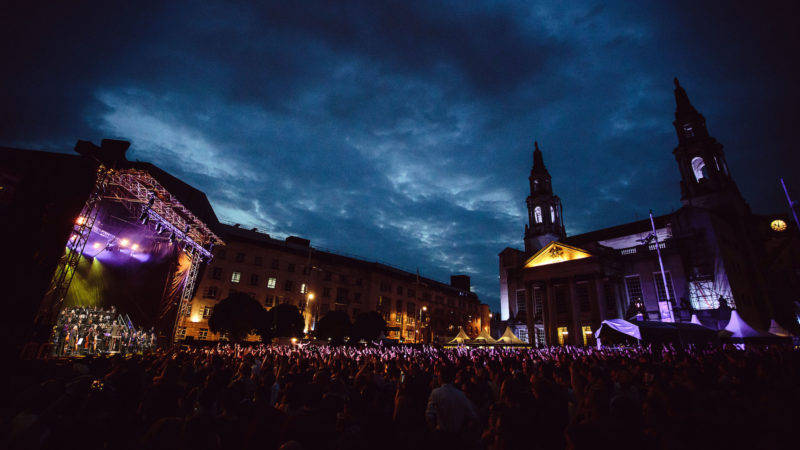 Sponsored by Opera North in the City

From club nights to film screenings and concerts, Opera North will take over Millennium Square for an unforgettable weekend of entertainment from Friday 28th to Sunday 30th July 2017. Book your tickets now.

The Orchestra of Opera North and Back to Basics are teaming up to put on a club night like no other.

Leeds club legends Back to Basics are celebrating their 25th anniversary by teaming up with the Orchestra of Opera North for a massive birthday party in Millennium Square on Friday 28th July 2017. They’ll have a 50 piece orchestra playing live, alongside DJs, live vocalists and a series of special guests – The Symphonic Sounds of Back to Basics is going to be the event to be seen at this summer.

Producer Steve Anderson told us what you can expect, “Classics, just wall to wall classics, the most incredible orchestra and singers, plus some amazing guest artists. It’s so uplifting, from beginning to end, and without a doubt, has a lot more original vocalists than any other show like this.”

“We wanted to add a more filmic, epic sound that can only be created by a symphony sized orchestra”

You’ve got an incredible night of music to look forward to. Basement Jaxx founding member Felix Buxton will be there with vocalists Sharlene Hector and Vula Malinga to perform their biggest hits. And they’re not the only names you’ll know – Groove Armada vocalist MC M.A.D. will perform their smash hit ‘Superstylin” alongside the live orchestra.

Also on the bill is Republica singer Saffron who’s got a real treat in store – she’s doing a special mash-up version of her UK Club Chart number 1, ‘Ready to Go’, as well as her previous club favourite ‘Anthem’ with N-Joi. That’s not all – the likes of Adamski, Robert Owens, A Man Called Adam, The Beloved and Sara Garvey will all be there on the night, to help take your favourite club hits to the next level.

The main show is split into two, bookended and bookended by DJ sets from Back to Basics residents, Ralph Lawson, James Holroyd and Tristan Da Cunha with Basics’ iconic founder Dave Beer on hosting duties – he’ll be keeping the party going until close.

“Classics, just wall to wall classics, the most incredible orchestra and singers, plus some amazing guest artists”

The idea for the show came from Phil Boughton, Director of Orchestra and Chorus at Opera North, “I’ve been wanting to do a concert like this for several years, having seen the BBC Ibiza Prom in 2015 and realised how amazing it could be. When talking to Leeds City Council about their Summer Series, I floated my idea as one of the concerts and they loved the idea and so it was born. To make it relevant to Leeds, we invited Back to Basics to meet us and it went from there. It was perfect timing for them as a means to celebrate their 25th Anniversary year.”

Boughton enlisted the help of two renowned music producers to help bring the show together. This is a first for the Orchestra of Opera North, but Cliff Masterson and Steve Anderson have hands on experience. Not only have they worked with the likes of Kylie Minogue, Little Mix and Emeli Sandé, but they were also responsible for Lush! Classical, a one-off event which saw them team up with the Ulster Orchestra and iconic club night Lush! for a sell out night at the SSE Arena in Belfast in 2016.

Their first job was to agree the setlist – Beer took the lead on this, bringing his 25 years of experience to bear and compiling a list of absolute bangers. The result is an evening of music that will take you back to the halcyon years of clubbing, but here it’s even more immersive.

“To make it relevant to Leeds, we invited Back to Basics to meet us and it went from there”

“It’s a long process and all about preparation. The first thing to do is get an agreed setlist, then it’s put together as a DJ mix using the original versions. Once we are happy with how it’s all working and the setlist is signed off, we recreate and reimagine the electronic elements in the studio and Cliff will add his new score for the orchestra, often playing the key elements but also we add an extra layer which takes the tracks to a new level of dynamic so its like a movie score,” Anderson explained.

That’s what’s going to make this a club night like no other. They’ve picked the songs very carefully to make sure they work not just for the orchestra, but also for the crowd too. They’re trying to recreate that sense of nostalgia, taking you back to the days when dance was barely even played on the radio, and giving you a sense of just how far it’s come.

“Every track had to bring something to the mix, whether it was drama, dynamic, excitement or emotional calm,” Masterson explained. “We then created a mix of these songs as they would have been played in a club and used that as our starting point for orchestration. It was important to us to do more than just replicate sounds and themes that were on the original recordings. When you have more than 50 wonderful musicians on stage, we wanted to add a more filmic, epic sound that can only be created by a symphony sized orchestra.”

Most dance songs have instrumental elements, but they’re just samples – here they’ll be played live by a 50 piece orchestra, with a new score that really brings the track to life. That’s what will make this celebration of Back to Basics’ clubland legacy one to remember – expect your favourite club hits to sound better than you ever thought possible.

“The energy of 50 people playing instruments live adds a whole new dimension to the pieces,” Orchestra and Chorus Director Boughton told us. “You will never have seen them performed by a symphony orchestra with the original vocalists and DJs. No other similar event has done that yet.” This is your chance to see a clubland institution working alongside a world-class orchestra to turn your favourite dance hits into something even better – and honestly, you’d be mad to miss it. Especially as tickets are just £28.

The Symphonic Sounds of Back to Basics is part of Opera North in the City, an open-air festival that will bring you timeless arias and songs from your favourite musicals in A Night at The Opera on Saturday 29th July 2017 and a screening of the iconic blockbuster Back to the Future with a live score on Sunday 30th July 2017.