Drama, emotion and a whole lot of plotting – this is going to be fun! 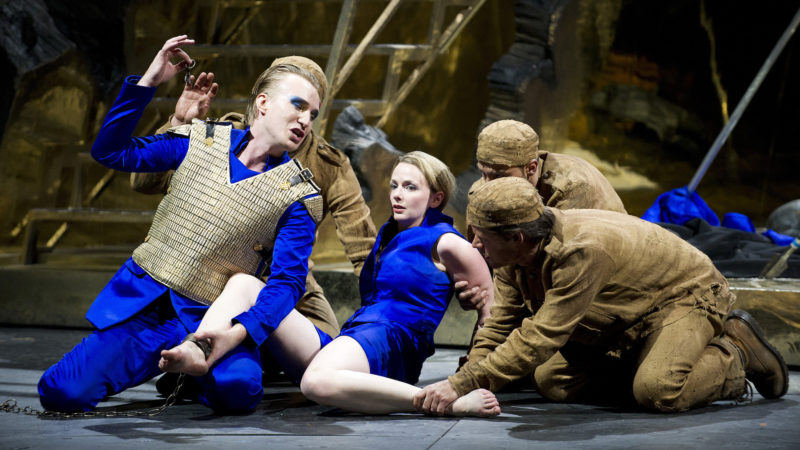 Cleopatra is vying for the throne. Julius Caesar is pursuing an enemy. Sparks fly when the two meet, but can their love last in this world of passion, vengeance and danger? Find out as Opera North bring Handel’s ravishing opera to Leeds Grand Theatre from 28th September to 17th October 2019. Book now.

Caesar and Cleopatra, their love story is epic, and so is Handel’s opera.

Giulio Cesare is Handel’s most famous opera – and with good reason. It’s an absolute masterpiece, a gripping tale of love, power and deceit told through a series of incredible arias. This is the story of one of the most famous couples in history, Julius Caesar and Cleopatra, and you can see it told in epic fashion as Opera North bring Tim Albery’s famous production back for another season. Expect sword fights, hot pants and high notes!

They’re both legends in their own right, but Shakespeare and Handel tell the story of Julius Caesar very differently. While Shakespeare focused on the events that led to his death, Handel created a fictional story around the uneasy alliance between Caesar and Cleopatra, so expect a mesmerising mix of passion, deception and revenge.

The story begins at the end of the Roman Civil War. Caesar has defeated Pompeo’s legions and followed him to Egypt, where his enemy has appealed to Tolomeo, the King of Egypt. Pompeo’s family begs for mercy, but just as Caesar is about to grant their wish, Tolomeo’s henchman arrives with his dead body as a gift. Instead of being pleased, he’s enraged and it captures the interest of Cleopatra who’s eyeing the throne. Soon, Caesar is caught up in a passionate affair and a murderous plot to overthrow Tolomeo. All chaos ensues!

This is ancient Egypt, but not as you know it

Tim Albery’s vision of Rome is utilitarian and militaristic. Cold, brutalist walls welcome you to their world, but they quickly give way to the stunning golden interior of an Egyptian pyramid. As the action plays out on stage, the walls revolve to reveal a labyrinth of interconnecting passages and rooms.

But while the set may look the part, the characters are surprisingly modern. They’ve used the costumes to emphasise the cultural and political differences between the Romans and the Egyptians, so don’t expect the usual headdresses and kalasiris. Instead, you’ll see Cornelia in a skirt suit, Caesar in a muddied military uniform and Cleopatra in electric blue hotpants.

Julius Caesar is played by a woman

Julius Caesar is a king and a warrior, he’s one of the most masculine figures in history, and yet, he’s played by a woman. Handel originally wrote the role for an alto-castrato, a high male voice created by castrating the singer before puberty – nowadays, those roles are handed over to a contralto or a mezzo-soprano, the two deepest tones in the female repertoire.

They’re called trouser roles, and they’re more common than you’d think. In fact, there are two of them in Giulio Cesare. Pompeo’s son, Sesto, is also played by a woman. See if you can spot them on stage – it’s not as easy as you might think, especially when they’re in costume.

When Cleopatra decides to seduce Caesar, her motives are questionable. She may be intrigued but she’s certainly not in love. And Caesar’s adoration is equally flawed – it’s lust at first sight, he doesn’t really know the woman he’s just pledged his army to, because Cleopatra is disguised as a servant.

But what begins as an elaborate takeover plot becomes a tale of true love as Caesar and Cleopatra realise they have more in common than they thought. Both in positions of power, both unable to trust anyone, they need each other and love blossoms. For all her scheming and plotting, Cleopatra would rather abandon her plans and send Caesar away, than see him in danger – it must be true love.

The plot is mayhem, but the music is sublime

Giulio Cesare is a mish-mash of characters, scenes and subplots that will make your head spin, but as the action unfolds on stage, you’ll soon realise that the music is so much more important than the plot. Handel has a way of communicating a character’s emotional and psychological state through the score, so he carries you through on a wave of passion, anger and fear.

This is Handel’s most beautiful opera. Originally four hours long, Albery has cut it down and tightened it up, so you’ll hurtle through the story in a whirlwind of beautiful arias and extraordinary melodies. There isn’t a weak moment in the entire opera, it’s an unforgettable night of exquisitely written and performed music, which means it’s the perfect choice for first-timers. This is your chance to experience the magnificence of Handel as the story of Caesar and Cleopatra unfolds before your eyes.

Opera – try it once and you’ll be hooked, which is why Opera North launched Try It ON! Sign up now and you can get one of the best seats in the house for just £20. It’s the perfect opportunity to dip your toe in the water and what better way to do it than by going to see Giulio Cesare?