Where to Go Climbing in the Yorkshire Countryside

These are the best places to go climbing in Yorkshire. 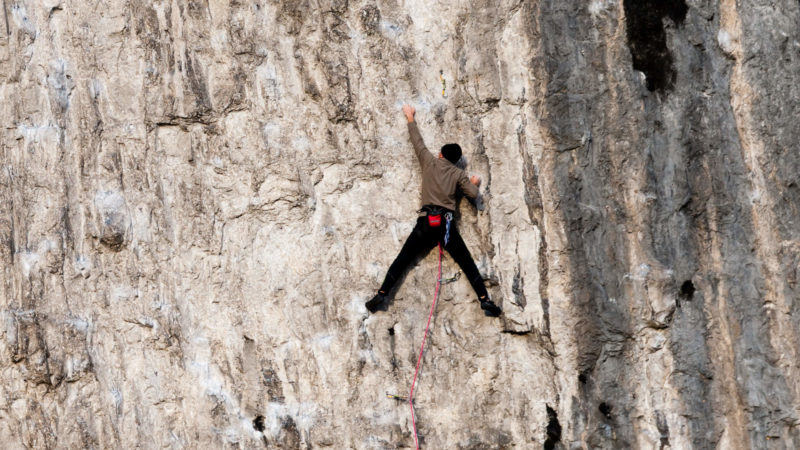 The Yorkshire countryside is a playground for enthusiastic climbers who want an adrenaline rush – here’s where to go and how to do it.

Ever tried rock climbing? The best way to get into it is with a course at one of the city’s climbing centres, where you can learn the ropes in a safe, supportive environment and build your skills until you’re ready to go it alone. And then God’s Own Country is your oyster – and believe us, there are oodles of challenges to take on. You can master simple bouldering problems in the picturesque moors, ascend tough climbs on the region’s cliff-sides and conquer mountains in the Yorkshire countryside.

The Roadside Boulders at Caley is one of the best outdoor bouldering spots in Yorkshire. Head to the bracken hillside just off Leeds Road, where you’ll find an area of greenery that’s interrupted by a series of massive boulders. It’s a landmark attraction for budding climbers with a host of accessible problems starting at F2 that go all the way up to f8B. They’re particularly popular during the summer as hundreds tackle popular routes like the Blockbuster and The Sugarloaf.

Caley Crag offers a completely different climbing experience, just metres away from the Roadside Boulders. It’s found at the top of the same hillside and it’s even more popular. It’s split into two sections – the Uphill Crag and the Downhill bouldering circuit, which offer grades between Severe and E8. Bring a rope and a rack for the Uphill, where you can work your way to the top via a series of challenging routes. The Downhill is more like a bouldering treasure hunt as you weave between the trees to find your next problem.

Gordale Scar is an awe-inspiring attraction, but it’s also one of the best rock climbing spots in Yorkshire with views across Malham and the Yorkshire Dales. This limestone rock gorge is a bucket list-climb with hundreds of different routes for both traditional and sports climbers, ranging from M to E8 in difficulty. The overhangs are a popular ascent best tackled by experienced climbers, while the Scar wall offers plenty for beginners. Rockfall can be an issue here, which means you need to be extra-vigilant.

There are 174 different rock climbing routes for you to choose from at the Almscliff Crag. Two gritstone walls and a series of imposing boulders stand proudly amongst lush Yorkshire greenery and they offer challenges for all skill sets. Traditional climbing routes range from M to E7, with good rock, positive holds and decent year-round conditions. But Almscliff Crag is just as good for bouldering, with 181 different problems that you can master, graded from f2 to fBB+.

Ilkley Quarry is home to gritstone rocks that are best known by another name – The Cow and Calf. They’re as popular with climbers as walkers and they’re easy to find, just off the main route into Ilkley on Hangingstone Road. They provide two of the most popular bouldering routes in Yorkshire – the Milky Way and New Statesmen. But they’re just two in an area that offers hundreds of different challenges of varying degrees of difficulty, that range from Mod to E9.

Tucked away behind Ilkley Quarry is the Rocky Valley and it’s so quiet, you could even have the buttresses all to yourself. There’s a remote feel to the North-facing crag, which makes it a joy in the summer sun, but it can be hard-going during the colder months. There are six buttresses for you to tackle with 52 different routes and they cover grades D to E9, including popular routes like Long Chimney, Shock Horror and Three Slabs. If you want to climb a huge limestone crag, you absolutely have to try Malham Cove. It’s one of Yorkshire’s finest natural landmarks and there are no less than 280 climbs here, with a range of grades and styles to choose from. You can take on technical trails that range from Severe to E7 or quicker sport routes that go from F6a+ to F9a+. If you climb the main sections at Lower Wall and Upper Wall, you’ll likely have an audience below, but you can escape the crowds on the Upper Terrace or the Right Wing.

If you want to try bouldering in Yorkshire, there are few better places to go than the Spofforth Pinnacles. You’ll find a series of gigantic gritstone blocks in the middle of a meadow between Wetherby and Harrogate – it’s often filled with cows, so tread carefully, the cowpats aren’t great for getting a good foothold on the gritstone. The rocks are quite sandy, which can be challenging, but the wide range of problems are well worth a go. They range from f2+ to V8+ in difficulty, and it’s perfect if you’re a beginner as you’ll find plenty of easier routes here.

Baildon Bank is a Yorkshire legend within UK climbing circles. This hard sandstone crag throws up a few surprising challenges, which is why it’s one of the most popular climbing spots in the region. One minute you could be maneuvering your way up with ease, the next, you could be tackling tricky Elvis-legs and difficult handholds. The South-facing crag offers a healthy spread of grades on over 300 routes. The relatively easy 20-metre Hades is a popular climb, as is the more challenging No Surrender.

Credit: Chris Heaton licensed under Creative Commons for commercial use.

It’s not just the climbing that makes Simon’s Seat worth visiting, the views across the Yorkshire Dales will also take your breath away. But first, you’ll have to get to the top. You can tackle traditional routes from D to E6 and bouldering challenges between f2 and f8A+. There are smaller, harder faces to the south side, but the main challenges come on the north side where it reaches 20-metres high – take the classic Arête Direct, which will see you start on the right and traverse left under the overlap.

Copyright Steve Hicks licensed under Creative Commons for commercial use.

If you’re a keen boulderer, you can enjoy an incredible day of climbing at Shipley Glen. This is one of the best pure bouldering sites in Yorkshire, and it’s particularly good for mini-routes that test your technique in short bursts. There are 23 different gritstone boulders with a range of difficulties for you to choose from, which means there’s something for everyone. You can work your way through the 350+ climbs, each different to the last, and work your way up from grades f2 to f8A.

Hetchell Crag is one of the best places to go climbing in Yorkshire. There are four different parts to this small gritstone crag near Bardsey – the Turd Buttress, Beckside Buttress, the Left Main Wall and the Right Main Wall. It’s just as good for beginners as it is for experienced climbers, with grades ranging from VD to E4. So if you have the skills, you can take on an eclectic range of climbs, including Al Manson’s famous Reach for a Peach.

Credit: Karl and Ali licensed under Creative Commons for commercial use.

South-facing and quick-drying, Crookrise is one of the best crags in Yorkshire. This is top quality gritstone rock. It’s good for traditional climbing, with over 100 different climbs for you to tackle, but it’s even better for bouldering as you take on a host of short 10 to 15 metre routes. There’s something for everyone here with climbs graded between f2 and f8A+, and whatever level you’re at, you can expect loads of variety.

There are over 1,000 different climbs at Brimham Rocks and they span the entire grading scale. Whether you’re a beginner or an expert, it’s one that offers something new every time you visit which has made it one of the most popular rock climbing spots in the UK. The Dancing Bear, the Turtle and the Idol are just three of the gravity-defying formations that make this a wonderful place to go climbing in Yorkshire.

Giggleswick South Crags is one of the most popular outdoor rock climbing spots in Yorkshire. It’s easy to get to, off the A65 near Settle, and split into the South Upper and South Lower. You can expect hundreds of tricky sport climbs, ranging from 4a to 9a+, as well as traditional ascents that will take you from HVD to E5. The most famous wall is known as the G-Spot and it provides a series of challenging traverses over a set of unique rock formations.

Credit: a< href="https://www.flickr.com/photos/dphodgson/">David Hodgson licensed under Creative Commons for commercial use.

The third of Yorkshire’s three big limestone crags, after Gordale Scar and Malham Cove, is Kilnsey. It’s a daunting prospect at 72-feet high but the challenges will take you on a series of incredible rock climbing routes that will test both your stamina and your technique. It’s one of the best in Britain for high-grade sport climbing, as you tackle climbs like the New Mystique and Highway 395. That said, there’s something for everyone here, with climbs ranging from HVS to E8 for traditional climbers and 3a to 9a for sports climbers.

Credit: Richard Swales licensed under Creative Commons for commercial use.

Earl Crag is one of the most underrated climbing spots in Yorkshire, particularly if you’re looking for a quieter place to scale. It has an eclectic line-up of compact gritstone buttresses and boulders with incredible views of the countryside below. The traditional climbs range from D to E9 and the boulder problems go from VB to V13, so you don’t need to be a pro to have a go. The big one to try is Tiger Wall, an incredibly challenging climb that will take you up the centre of the face.

Credit: Phil Champion licensed under Creative Commons for commercial use.

Heptonstall Quarry may be known as the Hell Hole, but it isn’t that bad. It’s a big west-facing gritstone quarry that’s popular with evening climbers. It’s steep and made of clean rock with a set of climbs across the Red Wall and Yellow Wall that are longer than usual for your standard gritstone routes. The 70 different routes range from super easy D ascents to wildly difficult E7 climbs, like the Forked Lightning Crack, which takes you up the zig-zig crack in the heart of the Quarry.

Nestled above Gordale Beck, High Stoney Bank offers top quality limestone climbing and some of the most incredible views in the Yorkshire Dales. It’s one of the highest mountains in the region, in fact, it reaches 249 metres at its peak, and there are 64 routes to take you to the top. High Stoney Bank is great for technical Sport climbs from 4c to 7b, but the traditional routes are just as good, and they range from S to E4.