If you've never been to the opera, this is the one to go to. 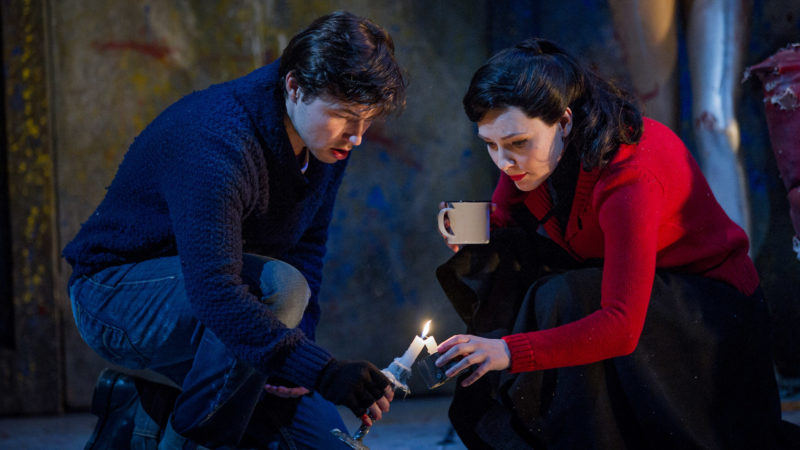 La bohème is back! Phyllida Lloyd’s unforgettable production of one of the most popular operas of all time returns to Leeds Grand Theatre from Saturday 12th to Saturday 26th October 2019. This is Puccini at his very best. Book your tickets now.

Opera North’s acclaimed production of La bohème returns to Leeds Grand Theatre from Saturday 12th to Saturday 26th October 2019 – and you need to see it.

La bohème is a comedy and a tear-jerker all rolled into one and it’s set to one of the most beautiful scores ever written. It tells the story of Rodolfo, a struggling poet who falls head over heels for his neighbour, Mimì. But when she falls ill, there’s nothing he can do to save her, and his grand love story turns into a tragedy. It’s no wonder this is one of the most popular operas ever made…

La bohème isn’t so different from the hit TV show. It’s about six friends, feeling their way through life. Falling in love, partying hard and having a good time, but also, dealing with all the twists and turns that life throws at them. It’s messy, it’s unpredictable and it can change in the blink of an eye.

“This is a story about love, and there’s not one person I’ve met that hasn’t fallen in love and has never had their heart broken one way or another,” Eleazar Rodríguez, who plays Rodolfo, explained. ‘I think people will identify with one or all of the characters, because each one of them brings a different portrayal that you’ll be able to recognise.’”

La bohème is the easiest opera you’ll ever listen to

There’s no other way to say it – Puccini is a genius. He changes tempo every 12 seconds, keeping you on your toes with an extraordinary playfulness. His music is incredibly complex, but for the audience, it’s effortless.

Even if you’ve never been to the opera before, you’ll feel like you’ve heard it a million times – and indeed, you might have because La bohème’s arias are famous in their own right. ‘Musetta’s Waltz’, ‘Che gelida manina’ and the tear-jerking ‘Oh Dio! Mimì!’ – they’ve all escaped the theatre and made themselves at home in the everyday.

It’ll take you back to your student days

Dodgy accommodation, pillow fights, junk food – life as a struggling artist isn’t so different to life as a student. The landlord bangs on the door and they don’t have the money to pay him, but when they do come into some cash, they blow it on a night out – it’s all achingly familiar!

“Anybody who’s never been, especially a young person who’s never been to the opera, this is the place to start because you’ll see that it’s all about you. It’s not alien, it’s absolutely about who you are at a deeper, richer level,” Michael Barker-Caven, Revival Director for La bohème, told us. “Puccini’s so clever at making music that makes you laugh and makes you respond. The characters do what they do in the crazy way you do. It’s like a soundtrack to life.”

It first premiered in 1895, but La bohème is surprisingly modern, so it doesn’t feel at all out of place in the bustling bars and cafés of 1960s Paris, where Opera North has set it. Expect cluttered artistic studios, lush café-bars and snowy, garbage-strewn streets as people whizz around on roller skates.

The set itself is ingenious. Every scene is captured in the huge white frame of a polaroid picture, a snapshot of life immortalised forever, and you can watch as the story unfolds within. But that’s not all. They’ve created a revolving café to take you from the couple outside to the party in the blink of an eye. Trust us, it’s epic.

The cast is as youthful as the characters

Puccini’s music is extraordinarily challenging and technically rich, so it usually demands an older, more experienced cast. But there’s something a little odd about seeing young characters played by mature singers, so Opera North has turned tradition on its head. They’ve brought together a supremely talented cast of young singers to make bohème true to life, and they’ll perform Puccini’s incredible score in all its technicolour glory.

It’s sung in Italian, but you’ll barely need the subtitles

The magic of Puccini is that he has the ability to tell a story through the music. His operas are so dramatic and his characters are so realistic that you don’t even need to know what they’re saying, the music will carry you through… of course, you will know, because even though it’s in Italian, the subtitles will be displayed on either side of the stage.

“What’s breathtaking about the piece, both dramatically and musically, is that you couldn’t take a piece out of it. I mean, not even a bar, not a phrase. Every single thing is exactly what it needs to be, exactly when it needs to be. And that’s what’s so miraculous. If you came to see this and there were no subtitles, you would absolutely know what was happening,” Michael enthused.

It may be one production, but two casts mean two shows

La bohème is one of the most popular operas of all time. This is Puccini at his very best and it’s guaranteed to pull in the crowds. Their last run got rave reviews, so this time, they’re putting on more shows than ever. So many, in fact, that they’ve double cast the main roles, and that means there are actually two shows on the go.

“Although the way we’ve structured the staging is similar, the singers have to discover it for themselves, and that means there will be subtle differences in the way we stage it, the way they respond to things and the chemistry of the relationship. And really that means I get to do two versions of the same show,” Michael explained.

This will be England’s first-ever dementia-friendly opera performance

Opera North has taken inclusivity and accessibility to the next level. On Thursday 24th October 2019, they’ll present England’s first-ever dementia-friendly opera performance. At this forward-thinking matinee, the lights will be turned on low throughout and they’ve made every effort to avoid bright lights or loud noises that might confuse audience members living with dementia. You can come and go as you please, ask for spaces around your seat and retire to their quiet spaces when you need a break, making this a great occasion for everyone.