Step into the world of a child as Opera North bring L'enfant et les sortilèges to life. 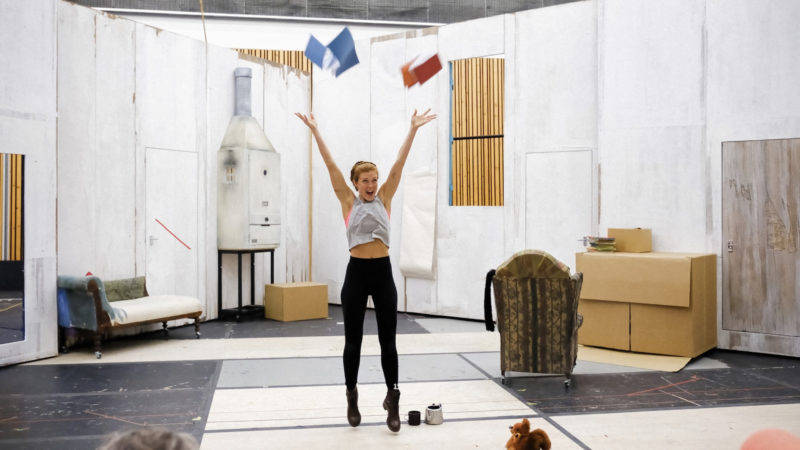 L’enfant et les sortilèges is one of the wackiest, craziest operas you’ll ever see. It follows a naughty child, driven into a rage when his mother tells him off. He takes it out on his room, breaking everything from the crockery to the furniture – but then the impossible happens, the objects around him begin to come to life and chide him for his wicked ways.

It’s utterly bonkers, totally hilarious and well worth giving up 45 minutes of your time for, but if you’re not convinced yet, we’ve got even more reasons why you simply have to go…

The first thing you need to know about L’enfant et les sortilèges is that it was composed by Maurice Ravel, one of the most influential composers of the early twentieth century. Set your expectations high, but don’t expect something conventional – the music is eclectic, unusual and constantly surprising.

“You’ve got some very fun, jazzy, crazy, kind of smoochy cabaret-style music for characters like the teapot and the teacup, then you’ve got a real Ravel number. That’s a real dance number. You mustn’t forget that Ravel is one of the greatest dance composers, he wrote a lot of ballets,” Director Annabel Arden explained. “And then you’ve got some really touching music – the princess, when she comes out of the broken book, it’s the most beautiful aria.”

There are so many characters, they’ve had to double up

L’enfant et les sortilèges is just 45 minutes long, but it has so many characters that most of the cast will slip off stage for a quick-fire change before they reappear as someone else.

It’s tricky to pull off, but it’s also allowed them to do something rather clever. You see, the mother is usually just a shadow, heard but not seen – here, however, she has a physical presence, and because she does, you’ll recognise her when she returns at the end in a different role, as the very squirrel the child helps.

And it’s not just L’enfant et les sortilèges. With six operas on the go, the singers are working on multiple shows, with rehearsals taking place simultaneously – in fact, if you book tickets to Trouble in Tahiti, you can see Wallis Giunta, who plays the child, taking on another lead role.

Oh my! That teapot is a rogue! And what he does with his spout, well, don’t even get us started. But he’s not the only one. This suited and booted character has brought his teacup with him and she’s just as saucy as her partner.

“The teapot has a spout which is attached to the front of him, but he’s got a really snazzy suit, and he’s got a teapot hat as a lid,” Arden explained. “The teacup is a very beautifully dressed Chinese lady who is playing two large sized teacups, which she sort of uses as an enormous bra. So she’s sort of playing with the teacups and he’s playing with the tea spout. It’s clear what they’re referring to, but they’re also just two very glamorous people who appear in the child’s room and make him laugh.”

They’ve done it on a shoestring and it’s sensational

L’enfant et les sortilèges is usually an extravagant, no expense spared affair – think flying bats and armchairs that come to life before your eyes. But Opera North have taken a different approach.

“The whole point of this season is that we’re doing six operas with the most incredible economy of means,” Arden told us. “If the NHS is being cut to shreds, then we’re saying ok, we can do six of the very greatest short works ever written with seven walls.”

And that’s exactly what they’re doing. They’re using the same sets, the same seven walls, across all six productions. It’s subtle, understated and incredibly effective – just like the child, you’ll use your imagination – and yet, you’ll move seamlessly from inside the house to the garden. Just wait until night falls, man, it’s creepy.

Never has it been more clear that opera is theatre

This is no concert. It’s a fully-fledged theatrical production, and as such, it’s open to interpretation – and you can bet your bottom dollar that Opera North has taken a different approach to all that have come before.

They’ve put a psychological twist on the fantasy, so you’ll see the child’s imagination projected onto a series of oh-so familiar (and absolutely hilarious) characters, from the fusty old grandma and grandad to the mad uncle and those embarrassing drunken party guests. Expect dance numbers too, with incredible choreography by Theo Clinkard.

One of the most intriguing things about L’enfant et les sortilèges is the fact that half the opera is sung in a nonsense language. The cats sing an entire refrain in meows, the clock regales you with a ditty of dings and the garden creatures have their own marvellously chaotic chorus of weird and wonderful noises. But despite the fact that they’re not using real words, it’s still really easy to follow.

The other half of the opera is sung in French, and there’ll be subtitles to translate Colette’s hilarious and touching libretto into English, so you won’t miss a thing.

The costumes are absolutely ingenious

They may not have gone down the traditional route with the costumes, but that doesn’t mean you aren’t in for a treat. If anything, they’ve become even more creative with them, so you’ll find yourself transported into a surreal dream where reality and fantasy collide.

Take the armchair for example, it comes to life, but not in a way you’d expect, as costume designer Hannah Clark explained, “Traditionally the actual furniture comes up on two feet and comes to life, but what we have done is create these fabulous costumes that are made out of the upholstery fabric of the two pieces of furniture, so they are really fun and playful as well.”

Never been to the opera before? Now’s the time to go because you could save up to £18 on your ticket. Just take advantage of Opera North’s ‘Try for £10’ offer. Call 0844 848 2720* to book your tickets and you’ll be allocated the best available seats on the day.