10 Big Plans in the Pipeline for Leeds

Find out about the big changes coming Leeds’ way. 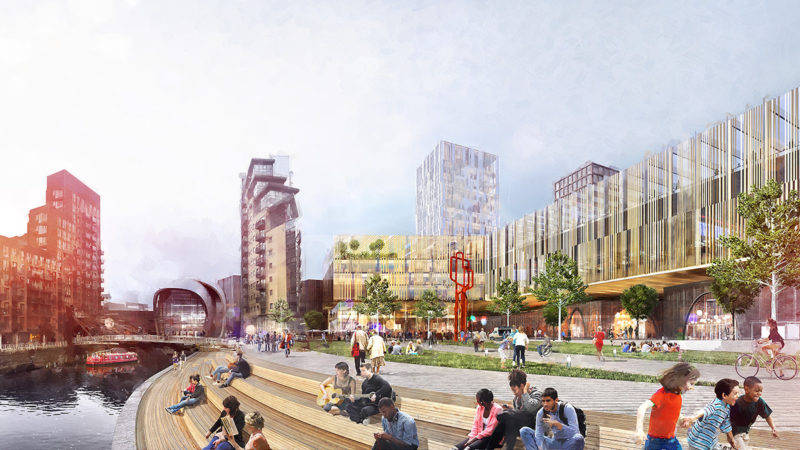 Look back 10 years and you’d be amazed at how much Leeds has changed – and it seems the same will be true in another 10 years, because big plans are afoot to improve, develop and transform the city. From transport to new builds, huge regeneration projects to landmark restoration jobs, find out what the future holds for Leeds.

The mammoth project for the South Bank

The rejuvenation of the South Bank is only just getting started. What was once a long forgotten part of the city, is now the key to Leeds’ future growth. The likes of Brewery Wharf, the new Southern Entrance to Leeds Station and Leeds Dock have led the way, but now a framework has been released for the area’s future – and it will transform the 185 hectare space into one of the biggest redevelopment projects in Europe. If all goes go to plan, it will help to create 35,000 new jobs and 4,000 new homes, as well as creating new public spaces, a huge park and landmark buildings – it could be the city’s biggest achievement of the century.

The impact of HS2

Much of the South Bank’s future development will be impacted by the arrival of HS2 in Leeds. The second stage of the new high speed rail track connecting the North to Birmingham and London is set for completion in 2033. It will connect to a new and improved version of the current station, which is the busiest in Northern England. As plans for the South Bank move forward, HS2 will also have huge role to play in attracting businesses and investment to Leeds.

The Ivy’s arrival in Leeds

The Ivy is marking its 100th anniversary with big expansion plans in 2017 – and they’ve set their sights on Leeds, alongside Bath, Bristol and Manchester. The original capital venue is renowned for its fine dining and art deco styling, and though it remains to be seen what type of restaurant Leeds will get, it’s a huge coup to have such a big name coming to Leeds.

There was a bit of mystery surrounding the purchase of the former Tetley Brewery site by Vastint, the property division of IKEA, in 2015. But, they’ve now released plans for what they’re going to do and it’s impressive. It will have thirteen buildings in total, ranging from 2 to 30 storeys, with space for offices, homes and a hotel. They will also have room for shops, bars, restaurants and gyms, with everything connected by swatches of green spaces.

The former British Gas building is a bit of an eyesore, but not for much longer because it’s set to become one of the city’s big new developments. The original 12 storey building is set to become a 182-bed hotel, and that’s going to be followed by some seriously impressive additions. Heeton Holdings Ltd have revealed plans for phase two which will see a total of 780 apartments across five new towers that range from 11 to 42 storeys. It could have a huge impact on the city’s skyline as the tallest one will surpass the height of Bridgewater Place.

For many years, First White Cloth Hall has been left derelict, and as a result, it’s been on the Heritage at Risk Register since 1999. But that could all change soon, as it has now been acquired by local developers Rushbond. Immediate work to secure the building is already happening, and plans are now being formed to transform into a space that befits its history, but also brings it into use today. It’s been long overdue through years of mismanagement, but this could be a huge step forward for the building and the wider regeneration of Kirkgate.

The city’s transport system failings have been well documented in recent years. From the trolleybus to the tram, there’s been plenty of talk but little action. Now something is actually happening. On the back of new stations opening at Kirkstall Forge and Apperley Bridge, it’s been announced that Leeds is to get three more by 2021, with plans for White Rose Shopping Centre, Thorpe Park Business Park, and what could be a landmark station at Leeds Bradford Airport, as part of a new £270 million transport investment plan. It’s not the transport solution we necessarily need, but it’s a step in the right direction.

There are big plans in the works for a huge new skyscraper just across the road from First Direct Arena. It will sit on the site of the current Hume House, a dilapidated mid-century tower. Knightsbridge Capital has teamed up with Nick Brown Architects to design 40 storeys of student, residential and leisure space, clad in Yorkshire gritstone. At 126 metres, it will be taller than Leeds’ current tallest building at Bridgewater Place too.

Work is underway to open a Retail and Hospitality Skills Centre for Excellence in Leeds. The purpose of the centre is to help capitalise on Leeds’ recent improvements in both sectors thanks to Trinity Leeds and Victoria Gate, as well as the countless new bars and restaurants that have opened in the city over the last decade. It will provide a city centre base to help businesses find and keep employees, as well as providing high quality training for those looking for careers in retail and hospitality.

The South Bank’s transformation is starting right now, with the new plans for the Temple Quarter. Developers CEG have released plans for the area’s former industrial heartland between Globe Road and Water Lane. The proposed development will feature two huge towers, one that stands at 40 storeys and another at 25 storeys. They’ll feature a mix of office and residential space, becoming the next big step for the South Bank.