Find out what's in store for Leeds. 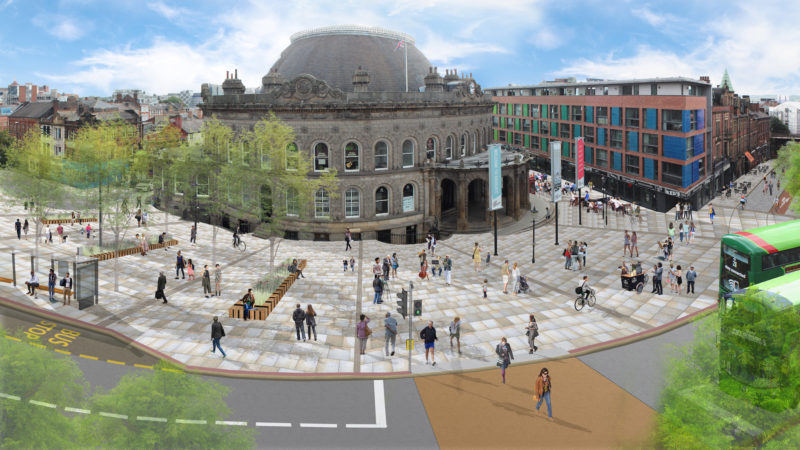 New plans have been unveiled to transform the city’s streets, reduce congestion and make bus travel quicker and easier…

The Corn Exchange is an important gateway into the city, so it’ll come as no surprise that it’s right at the heart of new plans to transform the city centre. The project, which will stretch from York Street to Meadow Lane, is predominantly focused on improving bus travel, but it presents a unique opportunity to enhance the public realm and change the city as we know it.

Why is it so important?

The government may have turned down the trolleybus scheme, but they haven’t abandoned us completely. The £174 million committed to Leeds is being used to improve our existing public transport network and the wider public realm in the city centre. The council has already put a string of new initiatives into action, including the £20.7 million transformation of The Headrow. Now, as we hurtle towards the March 2021 deadline, they’re planning a similar project around Leeds Corn Exchange.

These streets haven’t seen investment in decades and they don’t do the Corn Exchange justice. They were built in the eighties (not our finest hour when it comes to placemaking) and they’re designed to be functional, not pretty. After all, the Corn Exchange is at the very heart of the city’s bus network. It’s the main route from the north to the south, and at rush hour, it’s the bottleneck that clogs our streets, causing congestion, delays and frustration. The aim here is to kill two birds with one stone, by turning the city’s most iconic landmark into a world-class gateway.

It’s vital that we get more people using public transport. Not only will it help to reduce traffic and ease our transport woes, but it will also take us a long way towards meeting our environmental responsibilities. Leeds has committed to becoming carbon neutral by 2030, but that means reducing our CO2 output by an average of 2.64 megatonnes a year. To do that, we need to create a city where you don’t need a car, where the alternatives are not just accessible and affordable to everyone, but also easy, reliable and time-efficient – this is a big step towards that goal.

It will create a world-class gateway

If we want to make a statement, we need to make big changes – so Leeds City Council has drawn up exciting new plans to transform the city centre. They’re now in consultation, so you can have your say and help shape the city’s future. It all starts with Call Lane – the city’s hottest nightspot could be pedestrianised all the way from The Calls to the Corn Exchange, creating two new public spaces. The first would arc around the Grade I-listed landmark, following the curve of the street to double the size of the space. The second would transform the lower half of Call Lane into an alfresco dining destination where families can dine by day and revellers can party by night.

This new urban landscape would welcome you into the city, inviting you to stop, linger and enjoy the space. It’d create a whole new waiting environment for bus travellers and help support local businesses. It’d finally give the Corn Exchange the setting it deserves. But in order to do it, we need to divert traffic away from Call Lane, by turning Lower Briggate into a two-way street – and that’s something you can have your say on too. Like Call Lane, it would get a complete redesign – they’d relocate the parking, double the size of the pavements and take it down to one lane each way with dedicated bus stops to keep traffic moving. They’re also looking at the possibility of closing the road on the weekend, after the buses stop, and introducing a new taxi rank to help people get home safely after their night out.

But this project is much bigger than just two streets. If everyone’s on board, the whole area, from York Street all the way through to Boar Lane, will be given a major makeover. Think landscaped streets, modern bus stops and intuitive crossings built exactly where you want them. It’s a much more pedestrian-friendly design, but they’re also working to allow buses to move freely through the city centre. Lower Briggate, Kirkgate and York Street will all be closed to general traffic at peak times, while Boar Lane will have a longer bus lane, stretching from Mill Hill to Briggate. The aim here is to ease congestion, reduce journey times and get more people using the buses.

It will unlock the potential of the South Bank

Lower Briggate is set to become the main thoroughfare between the city centre and South Leeds, but once you cross Leeds Bridge, that responsibility passes to Meadow Lane. Built for another time and another generation, this expansive dual carriageway is no longer fit for purpose – it’s hard to cross, hard to navigate and hard on the eyes. The landscape is dominated by concrete and cars, but by the time they’re finished, it will be completely unrecognisable.

They’re going to cut it down to a single carriageway, with one lane in both directions, so it feels more like a street than a highway. That one change will transform the space, freeing up a big patch of land, which will become Leeds City Council’s contribution to the new 5-acre City Park being developed in collaboration with Vastint. Once complete, Meadow Lane will run alongside the park, with a channel of green space down one side.

Meadow Lane has been redesigned with pedestrians and cyclists in mind. The new walkways will be connected with a series of pelican and zebra crossings built on desire lines, so you can cross when you need to. They’re also adding a two-way protected cycle track that will run all the way from Great Wilson Street to Swinegate and the loop. As for the buses, they’ll get priority use of Leeds Bridge, thanks to a new bus gate, which means there’s one less bottle neck to hold up traffic at rush hour.

What do you think of the plans?

This is a huge investment in the city and it’s moving apace. The latest phase of consultations has just finished, but you can find out exactly what they have planned by signing up to the latest updates. We use the info you share with us in accordance with our privacy policy, so we can send you emails.