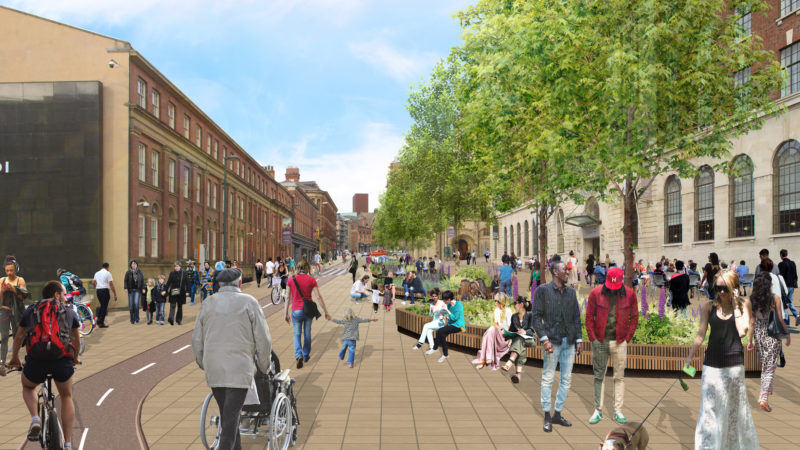 It’s one of the most important gateways into the city and now The Headrow is set to get a major makeover.

The next big project on the horizon for Leeds is a major transformation of The Headrow, Park Row and Infirmary Street. Not only will it improve public transport, making buses more reliable and efficient, but it’ll also give us two new public spaces. And that’s just the beginning because these ambitious plans will turn The Headrow into a world-class gateway worthy of our aspirations.

Why it’s so important

This is one of the most important gateways into the city. Many of the city’s main bus routes pass through The Headrow, but at peak times, they’re often caught in a bottleneck – and that’s something we can fix. By redesigning the roads, we can ensure buses move freely through the city centre, helping to improve efficiency and speed up people’s journeys.

But it’s not just transport. The Headrow is socially, economically and culturally important. It’s home to three major attractions in Leeds Town Hall, Leeds Art Gallery and the Henry Moore Institute, as well as a string of major retail and leisure developments. But believe it or not, no major work has been done since the 1990s, and with the exception of Victoria Gardens which was updated relatively recently, most of the landscaping you see today actually dates back to the 1980s. As a result, it looks dated – this is our chance to bring it into the modern day.

Big changes to shave time off your bus journeys

Over the next 10 years, the city’s transport system will be given a serious overhaul, including major improvements to bus corridors into the city. The aim is to make it quicker and easier for people to use the bus. But it’s no good fixing the problems in the suburbs, if we don’t fix the ones in the city centre, so this project of work is essential – especially when you think that over 100 buses an hour travel this route at peak times.

The existing design is no longer fit for purpose, so they’re starting from scratch, with some surprising changes in store. For a start, they’re taking most of The Headrow down to one lane each way. It might sound counterproductive, but in reality, this simple change will allow traffic to move freely in both directions. Right now, there isn’t enough space for buses to pull in. Their lay-bys are either too short or too thin, so they’re constantly blocking the road and stopping other buses from getting by. With the new designs, they’ll have space to stop without impeding traffic.

They’re also rerouting the buses that currently use New Briggate by transforming the top end of Vicar Lane into a two-way street. Buses to Chapel Allerton, Alwoodley, Moortown and Roundhay will be able to drive straight from Leeds Corn Exchange to North Street, diverting bus traffic away from The Headrow and making journeys on those routes more direct.

And once they’ve redesigned the roads, they’re going to control the flow of traffic with smart technology. They’re installing state-of-the-art traffic lights that can detect when buses are queuing and give priority to late running buses, so you won’t have to wait for the lights to change if there’s nothing coming in the other direction. They can also prioritise pedestrians and make it easier for you to move through the city.

Moving through the city centre will be easier for everyone

Bus travellers aren’t the only ones who will benefit from The Headrow’s redesign. Indeed, they’ve given just as much thought to pedestrians and cyclists. When it comes to wandering around the city on foot, you can expect wider footpaths throughout the area, making your travels a little more comfortable, and they have big plans for the pedestrian crossings.

The islands are on the way out, so you can go straight across the roads, without stopping or going out of your way. Even better, they’re introducing a series of new crossings on what they call ‘desire lines’ where people take their life in their own hands to get from A to B. The road between Leeds Art Gallery and Leeds Town Hall is the perfect example – to reach the crossing, you have to make a detour, but most people don’t, so they’re bringing in a new one that will make it easier for the hundreds of people who choose to hot-foot it across the road instead.

They’re also taking advantage of the opportunity to build on the city centre cycle loop. In this case, they’re adding a two-way cycle path from Westgate all the way to Cookridge street, and it’s completely separate from both walkways and roads. Cyclists will also be able to use the bus lanes, where they’ll only be sharing the roads with buses and taxis.

Two new public spaces and a new look for The Headrow

This is where it gets really exciting because it’s not just transport that’s getting an overhaul. They’re creating two new public spaces for us to enjoy, the first of which will be on Cookridge Street. The bottom end will be pedestrianised to create a new square – local restaurants will spill out onto the streets, giving us more alfresco dining options, and they’ll be making the pop-up parks we’ve seen over the last few years a permanent addition with oodles of greenery.

Just down the road, New Briggate is also set for a transformation. Traffic will be diverted to Vicar Lane, so the space between The Headrow and Mark Lane can be pedestrianised to create a new public space with a real cafe culture. Local favourites like North Bar and San Co.co will have the opportunity to spread out into the square and there might even be space for a street food vendor or two, creating a new summer destination in the heart of the city.

In addition to these two new spaces, the whole area is in for a dramatic transformation. It will be re-paved and re-landscaped, with trees, grass and plants adding a bit of much-needed greenery into the city. They’re also installing modern bus stops with the latest real-time technology and a sleek new design that’s as pretty as it is practical. Once complete, the public realm will complement and enhance our heritage buildings, bringing the history of Leeds to life in a new modern setting.

This is what The Headrow near Leeds Art Gallery could look like.

This is a huge investment in the city and it’s moving apace. The latest phase of consultations has just finished and the response was overwhelmingly positive, but you can find out exactly what they have planned by signing up to the latest updates. We use the info you share with us in accordance with our privacy policy, so we can send you emails.