15 Things Vegans Absolutely Have to Eat in Leeds

These are Leeds' greatest vegan eats. 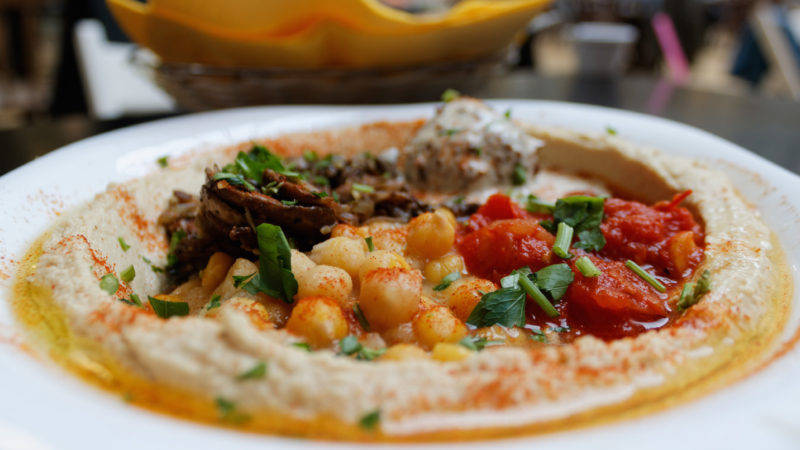 Heaving tacos, stacks of pancakes and even a fried ‘chicken’ dinner – who says vegans have to miss out on a downright tasty feed?

Vegans, listen up. This is your go-to list of delectable meat and dairy-free eats, and boy are you spoilt for choice. You can scoff jam-packed burgers, bulging kebabs and fake fish and chips, each rivalling their meaty counterparts. So next time you’re in the mood for an almighty feed, don’t fret, just work your way through this list of top-notch vegan grub.

The Greenhouse prides itself on its plant-based goodies, but it’s the Pancake Stack that you have to try. It comes with four light, fluffy and dairy-free pancakes, just the way you like them. You can have yours drenched in maple syrup and topped with seasonal fruit or loaded with chocolate sauce and a sprinkling of nuts.

The Vegan Classic Burger is proof that Wapentake takes its vegan alternatives seriously. There’s no scrimping here. They load their staple beet and bean burger with mushrooms, vegan cheese and slaw, but that’s not all. You’ll also get a pile of crispy wedges to dip in their boozy Bloody Mary sauce. Perfection!

The Calabacita Tacos at Pinche Pinche are the perfect way to kickstart your Mexican feast. Three soft corn tortillas are piled high with battered courgette and red cabbage, then smothered in a wonderfully rich cashew cream sauce. It’s a winning combination and something you probably won’t make at home, so go on, try something new and revel in the deliciousness.

For the ultimate lunchtime feed, make a beeline for Humpit to feast on their loaded hummus bowls. You can top them with whatever you like – chickpeas, salsa, mushrooms and onion are all up for grabs, not to mention their famous falafel balls, so you can really go to town. Whatever you choose, you’ll get a warm pita on the side to mop it all up with.

Knave’s Kitchen has put an Indian twist on an American classic to create the onion bhaji burger. The O.B.B. is made with two quarter-pound bhajis, then slathered in fresh riata and sweet mango chutney. They top it with the usual lettuce and tomatoes, they’re burger classics after all, until it’s so loaded with goodies that it has to be held together with a skewer.

The Raghda Pethis is an Indian-English hybrid with a northern twang. They load up a potato cake with spicy mushy peas and punchy turmeric noodles, then add diced onions and tomatoes. This scrumptious mess of flavour is finished with tamarind chutney to give it a sweet and sour kick that you simply won’t find on your usual chippy potato cake.

Cantina has a stellar reputation for its all-vegan junk food, but their Mac Got Fat goes above and beyond expectations. It’s fit to bursting – their deep-fried mac ’n’ cheese patty is topped with spicy bean chilli and sandwiched inside a fresh bun. Throw in salad and a deep-fried pickle for a belly-bursting combination you’ll want to have again and again.

The Falafel Voner Doner kebab is a sight to behold. They wrap Doner Seitan up with tomatoes, pickled pink cabbage and roast Mediterranean veg before smothering on a medley of sauces. You’ll get a generous drizzle of chilli sauce and vegan mayonnaise followed by a squeeze of lemon for an extra bit of oomph. Delish.

Bill’s vegan wellington takes comfort food to the max. It teams flaky pastry with a rich filling made from carrot, mushrooms and cashew nuts. Served in traditional, yet vegan style, it comes with butterbean mash, tender stem broccoli and a hefty jug of rich vegetable gravy, so you can lather on as much as you like.

If you’re looking for scrumptious vegan food, make a beeline for Fettle. Here, you can tuck into a creamy pasta dish that will soothe all your comfort food cravings. Toasted gnocchi is smothered in pesto and paired with a mix of edamame and green beans, before they add their secret ingredient – a smooth as you like cashew cream that transforms the dish.

The Vegan Quackhead pairs Dough Boys’ classic hand-stretched pizza base with a rich hoisin ‘duck’ topping. They switch the usual cheese for its vegan twin, then load it up with fresh cucumber and spring onions to counteract the sweetness. Just add a scattering of toasted sesame seeds and a pint of vegan beer from the bar to get your next night out rolling.

Possibly the healthiest of the lot, this steaming bowl of goodness is packed with veggies. They’ve got the broth down to a T, so it’s rich, aromatic and loaded with flavour. Add tofu, mushrooms and greens, sprinkle on spring onions and pick your favourite herbs from the selection on the side to create one of the tastiest noodle soups you’ve ever had.

Issho has created an oh-so-creamy small plate with no dairy in sight. The secret is silken tofu, which they blend with goma sesame sauce to create a wonderfully velvety cream that feels like the real thing (even if it does have a nutty twang). Sherry vinegar-soaked tomatoes are placed on top, followed by a sprinkling of crispy rice to create a dish that is light yet satisfying.

Mog’s has taken your classic fried ‘chicken’ dinner turned it on its head. In this case, the chicken has been replaced by crispy fried seitan and it’s topped with fiery Korean sauce, sesame seeds and spring onions to create a hot-as-hell alternative to the norm. Add a big pile of fries and a dollop of coleslaw to complete the dish and fill your belly.

Vegans can now devour a classic chippy thanks to JJ’s Vish and Chips. It’s all down to banana blossoms and their chunky yet flaky texture. They’re marinated and coated in a special batter to create the perfect fish substitute. Of course, no chippy dinner would be complete without the chips and mushy peas, so load ‘em on and enjoy a true British classic.