19 Leeds Beer Festivals You Need to Know About

From the city centre to the suburbs, make the most of Leeds’ beer festivals. 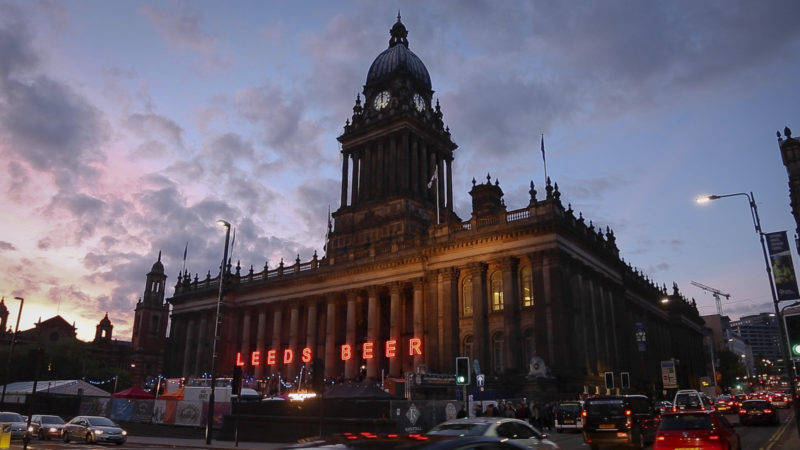 You never have to wait long for a beer festival in Leeds. The question is, which will you go to?

With the exception of December, when everyone’s drinking anyway, there’s a beer festival every month of the year in Leeds. Whether it’s the famous celebrations in Leeds city centre or some of the more quaint festivals out in the suburbs, there’s plenty to look forward to.

Although it’s primarily known for its live music offering, the Brudenell Social Club loves its ales and craft beers with a few local breweries on cask and more than a few world beers on keg and in bottles. They love it so much, in fact, that since 2012 they’ve held their annual Brew-denell Beer Festival, which brings together the likes of Kirkstall, Saltaire and Ilkley, alongside Birra del borgo, Oskar Blues and Mikkeller. With street food vans outside and live music on all weekend, they really pull out all the stops out.

For the past decade, Ilkley has been swarmed with beer lovers for their annual beer festival at the King’s Hall. A surefire sell out every year, it’s organised by the Ilkley and District Round Table Club to help promote local businesses, with donations made to good causes around the town. They succeed each year because they manage to source the best beer from across Yorkshire and the UK – think Wharfedale, Goose Eye, Northern Monk and, of course, Ilkley Brewery.

The Campaign for Real Ale (CAMRA) are of course a big deal in Leeds and they host their own festival every March at Pudsey Civic Hall. Each year they centre their shenanigans around a particular theme – 2016’s being the 200th anniversary of the Leeds Liverpool Canal with canal-side breweries being a particular focus. That’s not all though, because they also scour the world for the best beers, from as near as Yorkshire and as far as America, Japan and Australia. With brews you can enjoy while taking in hot and cold food, live music, beer stalls and even an old fashioned tombola, this is not to be missed.

Since 2012, Morley Cricket Club has been taken over by thirsty folk for the town’s beer festival. Working together with Liversedge’s Partners Brewery they stick on over 35 different real ales and ciders, featuring a range of breweries from Yorkshire and beyond. They offer plenty more too, with live music, rides, quad bikes, food stalls and a hog roast across three days. For the past years, Leeds boxing hero Josh Warrington open the event.

Now five years old, the North Leeds Charity Beer Festival has become a must do for real ale fans. With help from the Rotary Club of Roundhay and Sam Parker of the British Guild of Beer Writers, Roundhay Cricket Club offers over 30 different ales from around Yorkshire and further afield, with each year following a different theme. They also have ciders, spirits and soft drinks, while Wilson’s dish up their famous pork pies. Every festival sees the Rotary Club give some of the proceeds to local charities, with over £15,000 being given away since 2011.

A joint venture between Holy Trinity Church and the Rothwell Lions Club every April, the Rothwell Beer Festival is a community event that helps to give back to local charities as well as continuing the upkeep of the church. They scour the country to pick out the best beers they can find, with the likes of York, Thornbridge and Ossett all having their brews on in the past. They also have bottled beers, ciders, perrys, food and live music on offer, with special meet the brewer sessions too.

Taking place in the historic Victory Hall, the Thorner Beer Festival is a quaint village affair, but with plenty of choice to pick through. Last time out, they had 27 different beers on offer, from the likes of Northern Monk, Sunbeam Ales, Roosters and Brass Castle. Your ticket bags you a souvenir glass and tasting notes. There’s wine and lager for those who don’t want traditional fare, as well as hot food and live music.

There’s no better setting for a beer festival than Left Bank Church in Hyde Park. About 10 minutes taxi ride or train journey from the city centre, the old church becomes a hive activity every May with the likes of Ilkley, Leeds, Saltaire, Thornbridge, Marble, Wharfedale and Great Heck breweries showing off their wares. They also have street food vendors on site to keep you fed, and across the weekend, there’s a host of live entertainment too.

For the past six years, the Wetherby Lions have hosted a beer festival at St James’ Church to help raise money for Yorkshire Air Ambulance, and it’s always a popular weekend in the market town. The last one was the biggest yet, with over 20 beers on offer, as well as a prosecco bar, cider bar and soft drinks counter. Hungry, they have a proper bbq, not to mention, pies and peas to soak up all the booze.

Just outside of Wetherby, Clifford is just a small village, but it has a cracking beer festival for you to attend. They have over 25 different beers on the go, with the likes of Theakstons, Roosters, Northern Monk, Ridgeside, Brown Cow, Kirkstall and Copper Dragon all showing off their brews in recent years. You can also indulge in hot and cold food, live music and a raffle. It’s all for a good cause too, as the festival helps to fund the upkeep of the Village Hall and their amateur football club.

Fans of Yorkshire booze will appreciate the Collingham Real Ale Festival. It offers up 20 cask ales and keg beers brewed right here in God’s Own County, as well as Yorkshire cider. If beer or cider isn’t your bag, they also have prosecco, Pimm’s and wine, with food from local street food vendors. There’s plenty of live entertainment, including morris dancing, and it all goes to help them raise money for Prader-Willi Syndrome, for which they’ve raised £21,000 in the past six years.

While the Horsforth Beer and Cider Festival has taken some time off recently, locals need not despair, as the nearby Yarnbury Beer Festival will happily step into its shoes. A permanent fixture since 2010, their beer tent takes over the grounds of Yarnbury Rugby Club, offering up over 60 different real ales from all over Yorkshire including the likes of Kirkstall, Copper Dragon and Bradford. They also have cider and wine on offer, and the clubhouse bar is open if you fancy something a little more ordinary. Peckish? They serve up burgers and hot dogs with a side of live music all weekend long.

Still in its infancy, Temple Newsam Beer Festival fended off rough weather to make its first event a memorable one in 2016. Over 20 different beers were on offer, from the likes of Leeds’ own Whippet Brewing Co. to Bridgehouse Brewery in Keighley, alongside 12 ciders including three from the Yorkshire Cider Company. Folk also enjoyed live music, DJs and food from Wilson’s Pork Pies and Zorba’s Greek street food. The event helped to raise money for the upkeep of the grounds of Temple Newsam.

This is a beer festival unlike any other you’ll come across. It’s a city-wide, 10-day celebration of beer. Their first event has seen a number of special one-off events at the city’s best bars, including the Ilkley Brewery Beer Match Experience at The Black Swan and the Beaverton Tap Takeover at Headrow House. They also run longer events like The Cross Keys x North Brewing Co. Beer Dinners and the Low Mileage Beer Festival at The Brunswick. It’s only its first year, but we hope it’s not its last.

Now in its fifth year, the Leeds International Beer Festival has quickly become the headline event of the year for the city’s beer lovers. The iconic Leeds Town Hall is taken over by breweries as near as Kirkstall and as far as Tuatara in New Zealand. But it’s about more than just a beer – they’re famed for the quality of their street food and live entertainment, be it music or art, and you even get to drink in unique spaces such as the cells below ground level.

Barwick-in-Elmet is most famous for its striking maypole in the centre of the village, however the local beer festival will soon be giving it a run for its money. Now in its eighth year, the Village Hall offers 20 Yorkshire cask ales, alongside eight different wines and 288 bottles of cider, world lagers and craft beers. There’s pie and peas to soak up the booze and a selection of traditional bar games to get involved in. Even better, a portion of the proceeds goes to the Barwick-in-Elmet Maypole Trust to help them put on the 2017 Maypole Festival.

Taking over the the grounds of the Tetley for the first time, Oktoberfest Leeds is a four day celebration of Bavarian food, beer and music. You can sup the Erdinger’s weissbier and haus bier, while listening to the Oompah band – and if you happen to get hungry, they have a host of German dishes to devour, including Bratwurst, Brezel and Schnitzel. Although this is their first year, we’re already hoping they’ll return in 2017.

Oktoberfest is at The Tetley from Thursday 6th to Sunday 9th October 2016.

Coopers Bar and Bistro in Guiseley is the venue of the suburb’s yearly charity beer festival, which is arranged by the Guiseley Lions, who give the proceeds back to good causes in the local area. There are 25 different real ales and cask beers from around Yorkshire on offer, as well as wine, cider and the beer festival favourite, pie and peas. Add into the mix raffle prizes and live entertainment, and you’ve got a weekend well worth leaving the city centre for.

Otley Beer Festival is unique in that it’s the only weekend-long festival you can’t buy tickets for in advance – it’s pay on the door only. When you get past the queues outside Otley Rugby Club, you can see why this beer festival has lasted two decades. Their last event in 2015 saw over 60 real ales from 34 different breweries, as well as a choice of five craft beers for the first time. With donations made to Otley Parish Church and other local charities, they’ve raised an incredible £77,000 since 2002 – here’s to another two decades then.