5 Leeds Eateries That Will Make You Seriously Consider Going Veggie

Even the carnivores will be tempted by the veggie eats at these five indies. 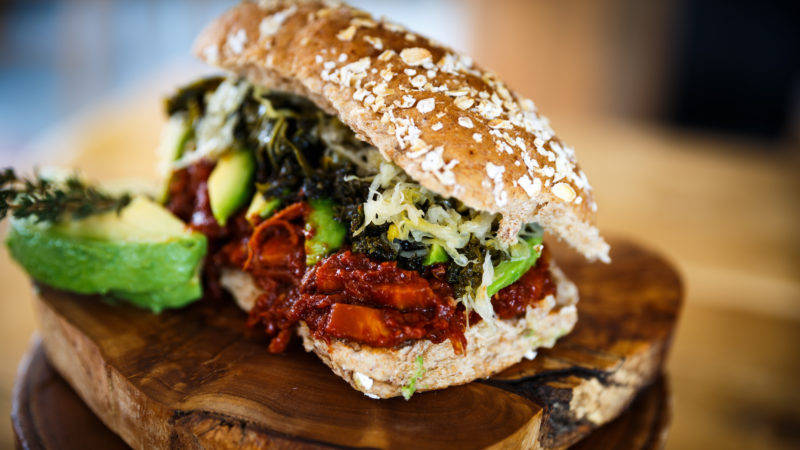 The veggie food at these five Leeds eateries is almost good enough to leave meat behind.

Okay, okay, you’re sceptical, but hear us out! Vegetarian food can be just as tasty, just as filling and just as irresistible as its carnivorous counterparts. Don’t believe us? Try the delicious eats at these five local favourites – you’ll soon be converted to our way of thinking, even if it’s only for a night.

It may be more of a bar than a restaurant, but we challenge you to spend time in Bundobust without devouring some of their Indian street food. Their menu is packed full of ingenuity and flavour that will make you forget all about meat. There’s the classic Tarka Dhal or their famous Bundo Chaat, but the standout is the Vada Pav. A burger with a difference, it’s a spicy mashed potato ball stuffed in a brioche bun with red and green chutney and hot green chillies – and it’s been named one of the best burgers in the world by Bloomberg. Try it for yourself.

Down and dirty vegan food, that’s what Knave’s Kitchen deals in – and that’s why you should check it out. They’ve gone out of their way to prove that vegans don’t live on lentils alone, with a menu of all-time classics you’d expect to see in the pub, but here, they’re 100% meat, dairy and animal product free. You can feast on their famous Onion Bhaji Burger, plow into a creamy Jerked Jackfruit Jamaican Curry or snaffle a belly-pleasing seitan sarnie filled with hummus, pickled cucumber, lettuce and smoked chilli sauce.

If you can’t quite bear to give up meat, Hyde Park Book Club offers a tempting alternative. They get their ‘meat’ specially from the Vegetarian Butcher. Imported from Holland, it’s the brainchild of Jaap Kortewag, a cattle farmer turned vegetarian who decided to find a way to make products look, taste and feel like meat. The result is a menu of meat-free delights that are just as filling as their namesakes. They’ve got a Full English made with Veg Butcher sausages, the Classic Veg Butcher Burger and a sandwich loaded with vegan chicken. You won’t believe it’s meat-free – but then again, that’s the whole point.

One of the most exciting additions to Leeds in recent years, Cantina has proved that vegan food can be deliciously versatile. It’s the city’s first 100% vegan cafe and it serves up a menu that’s incredibly diverse, so you can try something different every time you visit. This time it might be a battered seitan patty with sriracha sauce, beer-battered onion rings, jalapeños and vegan mayo, next time you might try deep-fried mac ‘n’ cheese patty with spicy black bean chilli – either way, you’re in for a treat.

Vegetarians and carnivores alike fawn over Humpit’s mighty hummus bowls. Everything’s made fresh, from the hummus itself to falafels and the lemonade. It’s served the traditional way, with a loaded bowl of hummus, chickpeas, parsley, olive oil and paprika – use your pitta as a scoop, load it on and enjoy one of life’s simple pleasures. Want to make it even better?Smother on your favourite toppings – falafel and salsa go down a storm, but the selection changes daily, so you can get experimental.