Oktoberfest is back – Prost! 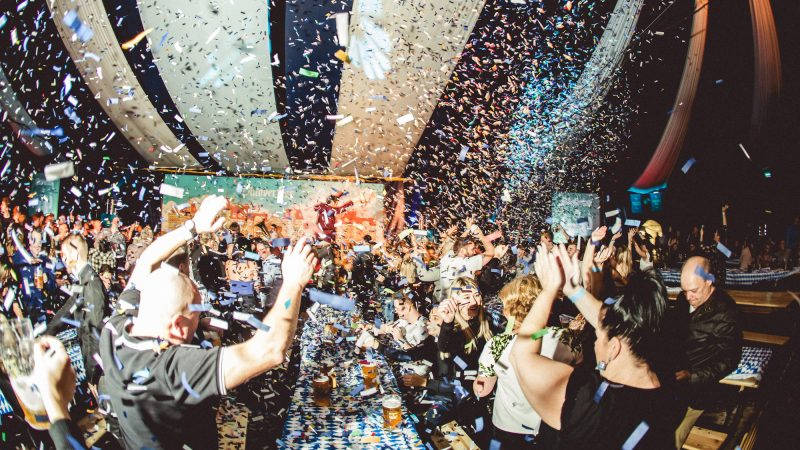 Oktoberfest Leeds returns this autumn, bigger and better than ever. Get stuck into steins, bratwurst & currywurst as the oompah band plays from Thursday 7th to Sunday 10th October 2021. Book your tickets now.

Raise your steins and enjoy a little slice of Bavarian tradition as Oktoberfest returns for four days of German-inspired shenanigans.

Since 2016, Oktoberfest Leeds has brought us the best Bavarian food, beer and music every autumn. Last year, they were forced to strip it right back, but absence really does make the heart grow fonder, so this year’s event is set to be bigger and better than ever. They’re taking over a brand new venue, with a big top tent on Globe Waterside from Thursday 7th to Sunday 10th October 2021 – and tickets are on sale now!

Inspired by Munich, recreated in Leeds Oktoberfest Leeds was inspired by a trip to Munich, where the organisers experienced the original event. After enjoying their fill of Bavarian fare, they decided to bring the experience to Leeds. The four-day behemoth they created has become the biggest Oktoberfest event in the North of England and it returns this autumn for a massive knees up at Globe Waterside.

Every year, they team up with an authentic Bavarian brewery. This year’s partnership is being kept tightly under wraps, but in the past, they’ve joined forces with the likes of Hofbrau and Erdinger, so you can expect steins of the finest haus bier, ready to raise in toast (or simply slosh all over your kameraden while you dance to a playlist of toe-tapping tunes). But it’s not just Bavarian bier. You can get the party started with traditional Bavarian shots or quench your thirst with a huge range of drinks. Beer, wine and spirits – there’s something for everyone at this festival-style knees up. And yes, they’re well-stocked in soft drinks, so even your designated driver can enjoy the revelry with a drink in hand.

Their move to Globe Waterfront means they have even more space and they’re filling it with street food vendors. Sheffield favourites Get Wurst will bring you the best of Berlin, with bratwurst, currywurst and the most incredible loaded fries you’ll ever wrap your lips around, but they’re just one of the three Bavarian street food vendors who will help line your stomach.

All that deliciousness would be nothing without the foot-stomping atmosphere created by their live band. Alongside oompah classics, they’ll get you on your feet with covers of everything from Neil Diamond’s ‘Sweet Caroline’ to Daft Punk’s ‘Get Lucky’. And, because one good turn deserves another, they’ve lined up a brass band to keep the music coming all through the night. Okay, let’s get down to the nitty-gritty. Oktoberfest Leeds returns from Thursday 7th to Sunday 10th October 2021. The first two days kick off at 4pm, so you can book your three-hour sessions right after work or head over later in the evening. After that, it’s an all-day affair, with the same three-hour sessions from 12pm. There’s an early finish on Sunday, because it’s a school night.

General admission is £8 on Thursday and Sunday or £12 on Friday and Saturday. But if you want to bag a spot with your mates, you’ll need to book a table. They’re available for groups of four, six or eight people for £22 per person, including a free stein. For the best seats in the house, upgrade to VIP for £35 per person, which includes a free stein, shot and Bavarian hat.

Oktoberfest Leeds will take place at Globe Waterside (opposite Chow Down) from Thursday 7th to Sunday 10th October 2021.