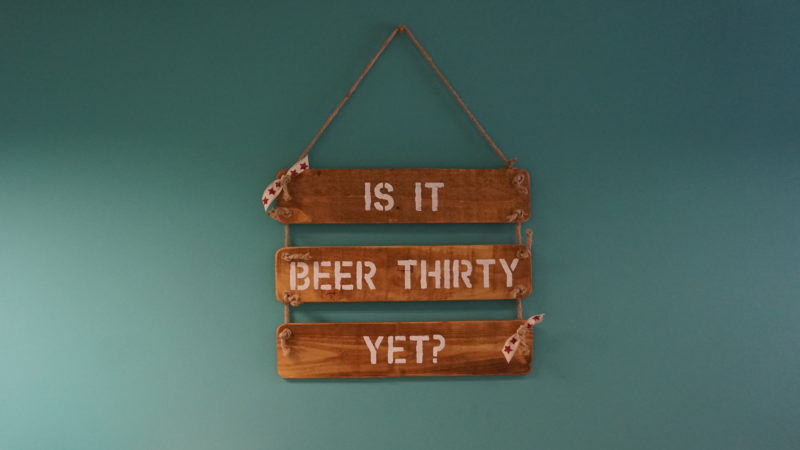 Craft beer lovers of South Leeds rejoice – Beer Thirty is now open in Morley and you can treat yourself to an array of the best beers from around the world.

‘Is it beer thirty yet?’ the sign on the wall declares, and it always is here. Beer Thirty is a new a new bottle shop and pour house in Morley and it’s home to the biggest selection of craft beer of any shop in South Leeds, so why not drop by next time you want to try a new brew?

It’s an extension of Beardsley’s other venture, Truth Hurts Brew Co. The brewery launched in 2016 and has won acclaim for beers like the Mirrors Don’t Lie Pale Ale, Abyss Porter and the Moonlight Blonde Ale. Beer Thirty will act as an outlet for Truth Hurts to showcase their regular beers, as well as their rare small batch brews, which you can expect more of in the coming months.

But at Beer Thirty it won’t just be their beers on the shelves. As Paul explained, “We want to be known as the place to go for the latest beer in the South Leeds area. We’ve tried to concentrate on the best local breweries, so that we can get the best beer out there.”

The shop, which is decked out with brightly coloured walls, reclaimed wood, industrial-style shelving and blackboard-painted signs, is home to racks and racks of beer, in both cans and bottles. So you can fill your basket with all your favourite beer, and even pick up a few you don’t know.

They’ve definitely done their homework and you can already look forward to an impressive array of regular breweries, from North Brewing Co, Northern Monk and Eyes Brewing to Cloudwater, Wilde Child and Magic Rock, all of which are Yorkshire-made favourites.

They’re not stopping at the borders of God’s Own Country though. They want to showcase the work of smaller breweries from around the UK, so you can expect regular deliveries from Verdant in Cornwall, McColl’s in Bishop Auckland and Mobberley in Knutsford. There’s even a continental edge – Beardsley fell in love with beer because of the breweries over in Belgium, so expect an array of Trappist brews alongside popular creations from across Europe, America and Asia.

They want to give people a chance to broaden their horizons, by putting popular craft beers alongside rarer more adventurous creations. Paul is an expert in the latter, so we asked him to drop some recommendations, “We have a thing for ‘out there’ beers like Atom’s Neutron Star imperial stout – it’s a 12.6% Imperial Stout and it’s amazing, if you can find it, try it. A couple of other really popular ones have been North Brewing’s Triple Fruited Gose, which is a beer like you’ve never seen or tasted before, and Northern Monk’s Neapolitan Ice Cream Pale Ale which counts as a beer and a dessert in one.”

Alongside the jam-packed shelves, they’ve also installed a few keg lines, which will include a couple of Truth Hurts beers, alongside a number of rotating brews. You can nip in and try a sample of the beers they have on tap, before filling up your growler – and if you don’t have one yet, you can buy one from them. If beer isn’t your thing, they also have a handpicked selection of wine, gin and rum on sale.

Whether you’re local to South Leeds or not, a visit to Beer Thirty is a must for all beer lovers. After all, you might just come across your next favourite…