New to Leeds: Coffee on the Crescent 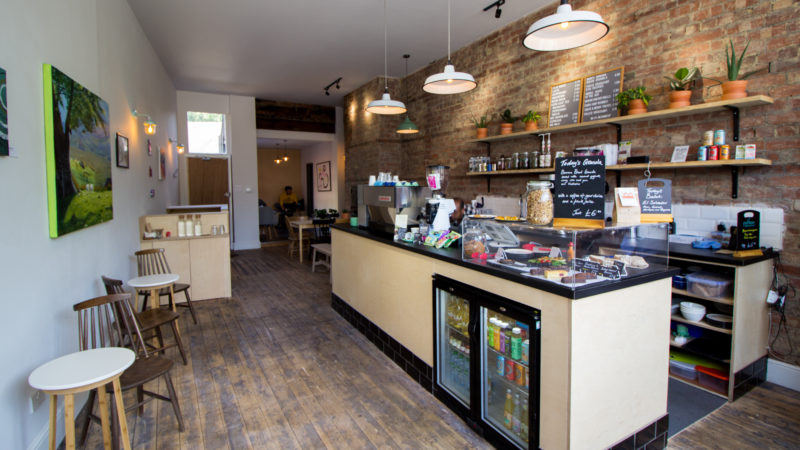 What would you do if your professional sporting career came to an end? Tim Linley decided long ago that he’d open a coffee shop when his did – and now that dream has been realised. Coffee on the Crescent is a new cafe on Hyde Park Corner. It’s a cool, stripped back venue where you can take a break from life and indulge in a locally-sourced cuppa and bite to eat.

It all started for Tim after he read Paulo Coelho’s ‘The Alchemist’ at the age of 17. The line ‘when you want something, all the universe conspires in helping you to achieve it’ inspired him to follow his dreams, so he left for university with plans to pursue a career in cricket. Four years later, he left with a degree and a professional contract, so it worked out quite nicely.

It was during his time at Surrey County Cricket Club in London that his love of coffee and cafes formed – he spent his spare time away from the field seeking out the coolest independents he could find across the Big Smoke to read and indulge his love of coffee.

“I was hooked and I knew when the time came I wanted to create my own in my hometown, Leeds,” Tim told us. “I was inspired by the coffee shop owners I met who often served their beautifully crafted drinks alongside their other great passion. It could be cycling and coffee, art and coffee, music and coffee. I immersed myself in the industry whilst I was still playing in preparation.”

He had to retire from cricket in 2015 at the age of just 34 due to persistent knee injuries, but a £2,500 grant from the Professional Cricketers’ Association allowed him to follow his new dream back home in Leeds. He moved to Hyde Park 15 months ago, fell in love with the area (particularly Hyde Park Picture House) and decided to make it the base for his next career step.

So here we are. Coffee on the Crescent is a treat for the eyes (and the tastebuds). They’ve worked with local interior designer Grace Highwood to create a peaceful and welcoming cafe in an iconic curved building on Hyde Park Corner. It dates back to 1906, and still has the original floor-to-ceiling windows at the front. They drench the venue in light, while the sparse white walls and bare wooden floors create an almost Scandinavian-feel to the place.

Just as much attention has gone into their food and drink offerings. Since Tim is a committed coffee lover and a champion of all things Leeds, he wanted to use local roasters for his brews. That means you’ll get Maude Coffee for their regular coffees, and North Star for their speciality coffees – which they change up on a regular basis.

Tim and his team are trained baristas, not chefs, so they’ve scouted out the best local producers to provide them with a small but tempting selection of grub. India Silvani-Jones, also known as The Jungle Kitchen, creates fresh vegan savouries each day, Le Croissant D’or makes their pastries and Tarte and Berry drop in their delicious cakes and brownies.

Now that Coffee on the Crescent is open, he’s making a conscious effort to tap into the city’s creative scene to make the cafe a real hub for Hyde Park and its residents. “I am creating Coffee on the Crescent to serve the best tasting and most ethically-sourced coffee to the local residents of Hyde Park, but we also want our space to support those who are turning their dreams into action by providing opportunities to showcase their talents.”

So, you can expect an array of events in the near future, with everything from art exhibitions to live music performances, author talks and kitchen takeovers. They’ve also got a small shop at the front of the cafe where you can pick up everything from coffee beans to use at home to Frank Green’s environmentally friendly plastic cups, AeroPress coffee filters and even homemade greetings cards made by his mum.

As second careers go, Tim has hit it out of the park with Coffee on the Crescent – why not try it out next time you’re in Hyde Park?