A New York inspired loft in the heart of the city centre – check out East 59th. 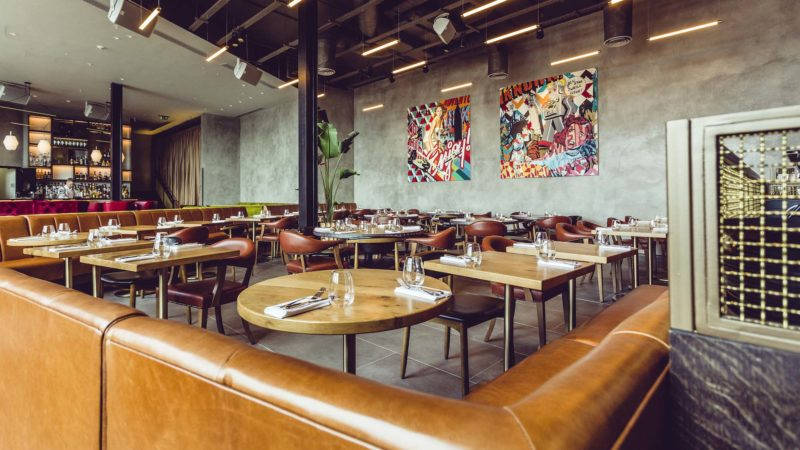 Hot on the heels of new restaurant Issho, D&D London have opened their new rooftop bar – and it takes inspiration from the Big Apple.

Victoria Gate’s Grand Opening may be a distant memory, but the luxury shopping centre is still bringing us a host of exciting new openings, the latest of which is East 59th. It’s the latest Leeds venue from D&D London, and follows in the footsteps of the recently opened Issho – but while the two venues may be neighbours, they couldn’t be more different.

Issho is a contemporary restaurant that takes its inspiration from Asia, while East 59th is a lively bar that looks to New York City for ideas. “With sister venue Issho just next door, we wanted to offer guests something completely different” Paul Rogers, Senior General Manager, told us. “East 59th is a slice of New York, right here in Leeds. During the day it’s a celebration of contemporary American dining, and in the evening it’s a sophisticated Manhattan rooftop bar with top quality drinks and cocktails to match.”

The name comes from another of D&D’s bars – their New York venue, Guastavino’s, can be found on East 59th Street, so they’re no strangers to the Big Apple, and they’ve used their insider know-how to recreate it here. It has the feel of a New York loft, as you head up the winding staircase to a vast room with floor to ceiling windows, concrete floors, statement light fittings and tailored furniture.

By day they’ll be serving up a menu of proper American grub, done to the kind of standard you’d expect from D&D. In the morning it’ll be New York bagels and pancakes loaded with toppings – be sure to stop by for their take on an unlimited brunch, which will give you unlimited pastries, bagels and a dish from the main breakfast menu for £15 – add unlimited Bloody Marys and prosecco for an extra £15.

Later in the day, they’ll fire up the charcoal grill, cooking everything from New York strip steak to free-range chicken and blackened salmon – whatever you choose, you can expect it to have a deliciously smokey flavour.

That’s accompanied by a menu filled with home comforts. You’ve got hamburgers, made with ground beef patties, lettuce, onion, house sauce and pickles – unless you want to upgrade it with crispy shrimp, smoked cheese or bacon, that is. Prefer hot dogs or a Reuben sandwich? They’ve got that too. But since New York cuisine is notoriously diverse, they’ve also thrown in some curve balls – crispy duck salad, anyone?

It’s the desserts that have Rogers excited, “I’m pretty sure they’ll prove a hit, from the baked New York cheesecake to our Knickerbocker Glory, as well as the Banoffee pie – and our special ‘freakshake’ desserts. The chocolate brownie freakshake comes topped with peanut M&Ms and a splash of bourbon while the lemon and raspberry cheesecake freakshake includes a white chocolate cookie, marshmallows, sprinkles and a splash of raspberry vodka.”

In the evening, the chilled out restaurant vibe gives way to a lively bar. You can buy your spirits by the bottle, if you’re planning to stay for the long haul, or treat yourself to one of their unusual concoctions. Their Weird Science cocktail menu offers up a few surprises – why not take A Walk Through Central Park? It’s a Woodford Reserve Old Fashioned, with peach bitters and syrup, bottled and served with cinnamon smoke.

Of course, they also do the classics. You can get margaritas, martinis, Manhattans and Long Island Iced Teas, alongside their signature 59th Fizz – made with Tanqueray No. Ten gin, tonic and elderflower cordial, Chardonnay and clear apple juice. It’s charged with CO2, bottled and served with a grapefruit twist and fresh coriander.

The wine list is as good as you’d expect, and they’ve made sure there’s plenty for beer aficionados – they’ve got Peroni and Saltaire Blonde on tap, with even more in bottles. But it’s not just the drinks that will get you down here, because East 59th is set to bring a slew of top class DJs to Leeds.

“La Discoteca, our weekly Balearic DJ night, kicks off on Saturday 15th July with sets from Ibiza’s top Pacha DJs including Graham Sahara and Willie Graff,” Rogers told us, and that’s just the beginning. “We’ll have some of the best names behind the decks every Saturday, and we’ve also installed a state of the art club sound system to make our DJ events the best in the city.”

Oh, one last thing – like Issho, East 59th will have its own rooftop terrace, a city centre sun trap that looks out over the rooftops, and it’s south facing, so it’ll get plenty of sun.