New to Leeds: Eat Your Greens

What would happen if Outlaws and Grub & Grog opened a bar together? It’s time to find out! 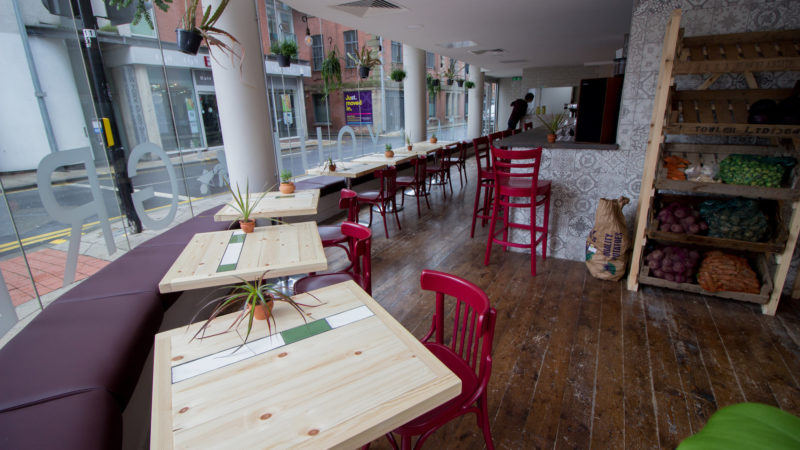 After years of pop-ups and residencies, The Grub & Grog Shop finally has its own digs. Eat Your Greens is everything you’d expect – food-obsessed, veg-centric and undeniably cool. But just because they’ve got a place of their own, doesn’t mean they’re on their own – they’ve teamed up with Outlaws Yacht Club to create something totally new.

“Outlaws Yacht Club has always been a favourite of ours – we love its laid back, all-inclusive environment. They’re internationally known for their music and charity events and this is coincidentally where we hosted their first regular residency. Working locally with artists, musicians and other businesses, they’ve created a safe and relaxing space where all will feel welcome,” Grub & Grog’s founder, Dan Palmer, told us. “There have been jokes said about us teaming up to open a restaurant over the years and with the last closure we decided to jump in and go for it.”

So what can you expect from Eat Your Greens? The first thing you need to know is that it’s a hybrid venue – and in more ways than one. It’s the best of Outlaws and the best of Grub & Grog, all rolled into one, so you can expect a bright, airy welcoming space where the food is as good as anything you can get on the bar. You can nip in for lunch, enjoy a leisurely afternoon of quality coffee or stop by in the evening for a glass of something nice.

But it’s more than that, because Eat Your Greens isn’t just a bar – it also has an organic grocery store. They pride themselves on sourcing the best produce and ingredients for their menu and now you’ll be able to take them home because they’re going to be selling everything they use in the kitchen, which is great news for all you budding chefs.

There’s a real sense of social and environmental responsibility here too. “We use organic produce, and most of our vegetables come from a local organic farm based in Tadcaster,” Chef and co-founder, Jim Hirst, told us. “All our dishes are heavily researched and although we take inspiration from many cuisines, we aim to substitute unattainable ingredients with local and European alternatives. Sourcing is really important to us and we only work with suppliers that we believe care as much as we do about the environment and their social responsibility.”

If you are eating in, you’re in for a treat. It’s not 100% vegetarian, but it’s definitely a priority here. Everything on the menu is vegan unless it says otherwise, but let’s face it, it wouldn’t be a Grub & Grog venture if they didn’t serve their famous eggs, and as meat-eaters ourselves, we’re looking forward to seeing how creative they are with their small but perfectly formed selection of fish and meat dishes.

As with most of their ventures, they have a daytime menu and an evening menu. There are a few dishes that cross over from day to night, like savoury porridge with cucumber and charred leek & pea broth, but for the most part, it’s different. Visit by daylight and you’ll be treated to kimchi pancakes with a fried egg, seasonal fish stew and their brassica bowl with molasses dressing, but later in the day, you can feast on roasted swede and sunflower seed tahini, purple sprouting cauliflower cheese and wood pigeon with roast apple and spelt.

When it comes to recommendations, it’s always better to get it straight from the horse’s mouth, so we asked Jim what you should try first, “One of my favourite dishes is the spiced potatoes and mulligatawny sauce. Mulligatawny is a colonial dish from Scotland and is basically a lightly spiced soup. We used this as a base and thickened it with sunflower seeds to give a creamy, almost Korma-like flavour. It’s served with mustard-spiced red skin potatoes, lots of pickles and an apple chutney. We serve fried oats, grown here in the UK, as a side garnish, similar to fried rice.”

Alongside the food, they’ll be serving up a range of local and European beers with, you guessed it, a focus on vegan and environmentally-friendly breweries. Prefer wine? They’ve got a handpicked collection of natural, organic and vegan wines too, which they’ve put together with a little help from Wayward in Chapel Allerton. But what has us really excited is the fact that they’ll be making their own liqueurs and syrups – that’s right, you’ve just found your new favourite cocktail bar, and one with a wonderfully laidback feel to it, just like Outlaws next door.

The vegans among you will be amazed by their White Russian, which is totally dairy-free, made with Kahlúa, vodka and oat milk. But it’s not all about booze, they’re working on a special range of mocktails, so you can enjoy a night out on the town without drinking (perfect for designated drivers, mums-to-be and the inevitable January health kick). Don’t miss the coffee either, it comes from Girls Who Grind, an all-female coffee roaster that sources all its beans from female producers and farmers.

At a time when we’re seeing some of our most beloved independents close their doors (Tall Boys, Ham & Friends, we doff our caps at your great work), it’s good to see one of our homegrown favourites making such a bold move – so get yourselves down there and support our newest indie.