A mainstay of the city’s bar scene has created something totally new in Horsforth. 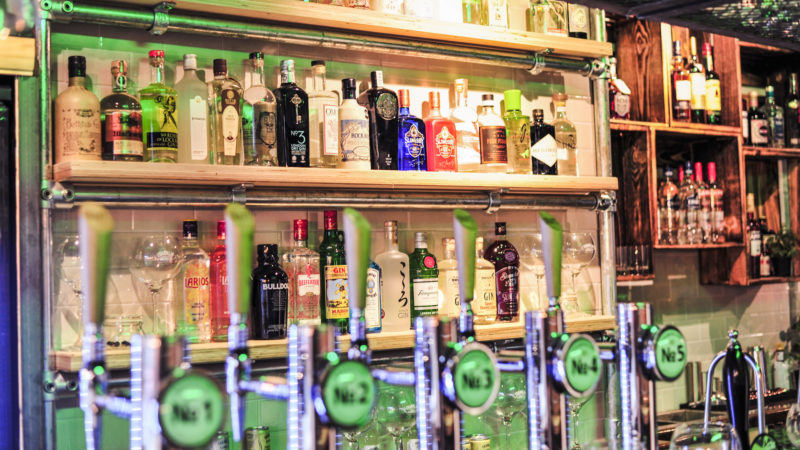 Gin lovers, beer aficionados – you’ve got a new bar to check out, because Granville’s Beer & Gin House is now open.

Matt Jones has a long history with Leeds’ bar scene. He opened his first bar in Horsforth back in 2004, and followed it up with a string of new concept drinking dens in the city centre and further afield. Bar 166 was the original, but you’re probably more familiar with his flagship bars – Roxy Ball Room and Roxy Lanes. Now, after 14 years in the business, he’s going back to where it all began with a new beer and gin house in his hometown.

“We wanted to create something where we first set up in business,” Jones told us. “Building a new drinking spot in my hometown has been a very personal project to me and it’s been very important to get it right.” But while it’s become something very close to his heart, he hadn’t originally planned to open a bar here.

Jones bought the property as an investment two years ago, but he struggled to find a tenant, so when the community started to make noises about the lack of quality drinking establishments in the area, he decided to do a German Bierhaus pop-up. It was a huge success and it opened Jones’ eyes to the potential of the building, so they set to work on an extensive renovation and extension project to create Granville’s.

It’s a gin and beer house, with a focus on cool, unusual and hard-to-find drinks, served in an intimate bar that feels like your local. They have 15 beers on tap, including a range of cask ales, and while local is obviously a priority, they haven’t let it limit them – you can try incredible beers from all over the UK, and indeed, the world.

Their beers change so often that they don’t have a menu, instead you’ll find their latest pours on the blackboard behind the bar. But to give you a little taste of what they’ll be serving, we caught up with General Manager, Andy Elliott to get some personal recommendations.

“Sourced from our friends at Shepherd Neame, Bear Island black lager could easily be mistaken for a heavy stout like beer by the look of its thick, dark colour, but you’ll be amazed by its light refreshing taste,” he told us, before adding Ridgeside Plato into the mix. “This single hop pale ale from Ridgeside Brewery in Meanwood offers a distinguished tropical flavour. It’s a small brewery run by just two guys, but you can tell that they seriously care about their beers and make every effort to offer the best quality possible. Having personally worked with Josh Waldock at Ridgeside, we knew their products would help set the precedent for the quality we aim to offer at Granville’s.”

Alongside the beer, they’ll have a surprisingly diverse collection of gins. Right now, the number stands at 60, but they’re going to build up their collection as they go, so you can always try something new. You’ll be able to get your favourites here, but the aim is really to showcase gins that you wouldn’t find in most bars, so expect small batch, boutique gins with quality at their heart.

For example, have you ever tried Spit-roasted Pineapple Gin? It’s made by That Boutique-y Gin Company, and although it’s not very common now, it was all the rage back in the 20s – drink it with Ting for a refreshingly different take on your favourite spirit. Or take a personal recommendation from Latitude’s Chris Nolan – he’s been working with Granville’s to build up their collection and he handpicked G’Vine Gin to go behind the bar. It’s a grape-based gin with a strong botanical profile that includes ginger root, liquorice, green cardamom, cubeb berries and nutmeg – couple it with Franklin and Sons Natural Light Tonic.

You can pair your drinks with a menu of classic bar snacks, like beef jerky, pork scratchings and hot pies from the ever-popular Pieminister. And it’s all served up in a venue that toes the line between traditional and modern. They scoured a local reclamation yard for pre-loved pieces, so the walls are decked out in rustic, reclaimed doors, with wooden booths below where you can settle in for the night with your friends. But it’s coupled with neon lights, blackboards and stonework to create something surprisingly contemporary.

Granville’s will no doubt be a big hit with the locals, but it’s also another great reason to head out to Horsforth for a suburban pub crawl, so why not check it out?