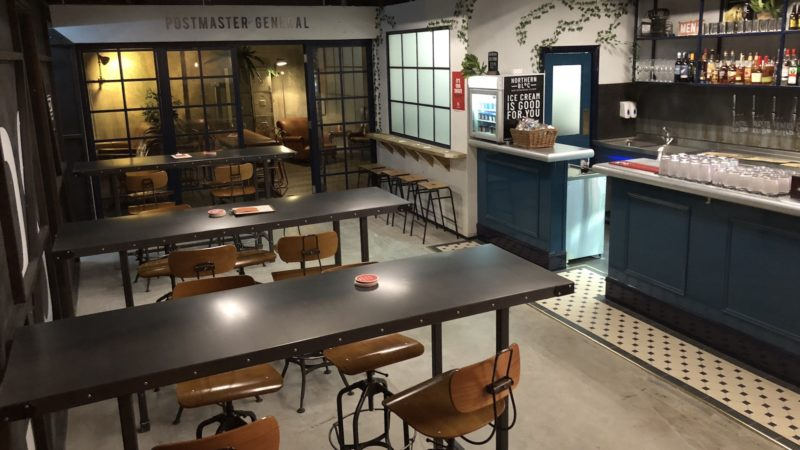 Lately, we’ve seen some of our favourite places open a second venue in the city, but rather than creating a carbon copy of the first, they’ve come up with a brand new concept – and that’s exactly what we have here. Leeds Postal Service comes from the guys behind Lazy Lounge, in fact, it’s right next door, but they’ve done something very different with its sister bar.

Timing is everything here. You see, Lazy Lounge opened nearly 10 years ago, it’s actually their birthday on 18th March 2018, and they felt it was time for a new challenge. And as luck would have it, the unit next door became available at just the right time. At first, they were planning to extend their original bar, but when they saw the plans for the unit, they realised they could turn it into something completely new.

“We didn’t want it to be just the same as Lazy Lounge, instead we wanted to open something that would complement Lazy, but give a different atmosphere,” General Manager Chris Marsden told us. “Lazy Lounge is all about gin, whisky and wine, so we thought we could focus more on beers. We have a good range of well-known draught products, with a more eclectic selection of packaged beers in the fridge.”

Their draught lines are dedicated to names you’ll know – you’ve got Amstel, Heineken and Birra Moretti alongside Theakston’s Barista Stout and Camden Pale. But over in the fridges, you can get a little more adventurous. They’ve got 37 bevvies for you to choose from, including a few local favourites. You can sup North Brewing Co’s Transmission, Ilkley’s Mary Jane and Northern Monk’s Northern Star. Huddersfield’s Magic Rock will also make an appearance, alongside Bakewell’s Thornbridge and Newcastle’s Wylam Brewery.

But it’s not just UK breweries – Leeds Postal Service has a rather American feel to it, it wasn’t intentional, but they’ve embraced it with a handpicked selection of beers from across the pond. Founders, Goose Island and Evil Twin will all vie for your attention – but don’t be surprised if you’re tempted over to the dark side with their European options either. Who could resist a bottle of Chimay Blue or a glass of Delirium Tremens?

And you can expect more where that came from, because their search for quality beers is ongoing. “The fridge is full of an ever-changing selection of craft type beers from lots of different suppliers, in fact, we recently became the first bar in Leeds to stock the new HandyMan Brewery IPA, which is very tasty stuff,” Chris explained.

But while beer is the main focus, it’s not the only drink on the menu. They’ve got a growing selection of bourbons for you to work your way through, with two very rare bottles of Pappy Van Winkle in the post. And they’ve combined their two great loves with a menu of boilermakers – try Going Postal, a simple but effective pairing of Camden Pale Ale and Bulleit Rye. You can even dabble in beer cocktails from their Shandies menu – not to be confused with the low alcohol variety, these bad boys bring together interesting combinations like Theakston’s Barista Stout, Diplomatico rum and coke.

They’re not doing food, they’ve left that to their neighbours, but they will have an entire fridge dedicated to Northern Bloc ice cream and you can snack on Joe & Seph’s popcorn too. You can also pick up their beers to takeaway, because Leeds Postal Service isn’t just a bar – it’s also a shop.

“The shop side is something completely new to us,” Chris confessed. “In this very unsure and competitive market, we thought it better to cover as many bases as we can, so to start the shop offering will be small, but hopefully as we grow it will get bigger and better.” You’ll find the shop area at the front of the bar, where you can pick up any of the beers in the fridge to takeaway, but they plan to add gins to complement their tastings next door, as well as spirits and wines. They’ll also be working with Deliveroo to bring the beer to you.

If you do drink in though, you’ll find yourself in a stripped back, industrial style bar that takes its inspiration from the work floor of a mail sorting office – this was, after all, the site of the old Royal Mail sorting office. It’s split into three parts, with the shop at the front, the main bar area behind it and a private Postmaster General’s Office with cosy sofas, games consoles, a vintage pinball machine and a dartboard. The decor is the work of Leeds based design studio, MadeByAnalogue, and the guys were so pleased with their work that they’ve given them a shareholding in the company.

Leeds Postal Service is another great addition to the city’s business district – an area that’s becoming more and more interesting all the time, with the likes of Mans Market, Good Luck Club and The Place adding to your after-work options. Check it out and let us know what you think…