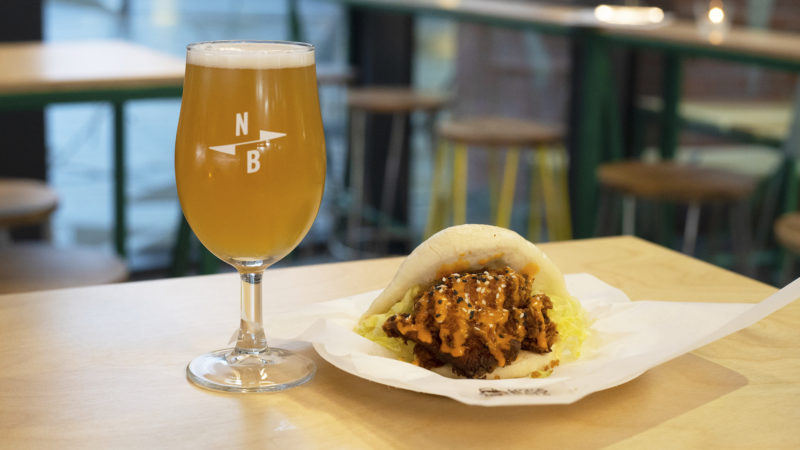 North Brewing Co. is growing fast. The Sheepscar-based brewery has won over beer lovers with its wondrous array of craft beer since it opened in December 2015. In fact, over the past twelve months, they’ve doubled their production capacity to meet demand – and as part of their ongoing plan to reach as many people as possible, they’ve opened a brand new North Brewing Co. Tap Room in the heart of Leeds city centre.

It’s the latest step in a remarkable 20 year story that starts with the legendary North Bar. Owners John Gyngell and Christian Townsley opened one of the first craft beer bars in the UK on New Briggate in 1997, giving people a chance to try brews they wouldn’t usually be able to find. Fast forward to 2018 and they’ve now got a total of seven bars across Leeds and Harrogate, as well as their very own brewery and now their first off-site tap.

“North Brewing Co. Tap Room is open seven days a week,” Gyngell explained. “Our opening hours at our current brewery tap are restricted by it being a working brewery, so this new space gives us a real scope to introduce new people to our beers. It’s a place to showcase the very best beers from North amongst national and international craft beers from other breweries we admire.”

The bar is dominated by the 24 taps that line the back wall, many which will be showcase the creations of North Brewing Co. They’re delivered straight from the brewery, so you’ll be drinking fresh brews made just days ago. Expect all the North favourites, from the Herzog Kölsch-style Lager to the Sputnik Pale Ale, the Transmission IPA and the Full Fathom 5 Coffee & Coconut Porter, although the offering will change on an almost daily basis, depending on what they’ve been brewing.

The Tap Room will exclusively serve their latest collaborative beers, which they make in collaboration with other craft breweries from around the world, and you can look forward to an ever-changing range of guest beers too. They’ve had brews from the likes of Left Handed Giant, Cloudwater and Verdant already, and there are even more in bottles and cans in the fridges. They even have three taps dedicated to red wine, white wine and prosecco, as well as two draught cocktails – Negroni or Aperol Spritz.

It’s not all about booze though. The North Brewing Co. Tap Room is open every day from 7.30am, so you can pop in for your morning coffee, sourced from Dark Woods in Huddersfield, and get a bite to eat. The bar is home to a small kitchen that’s run by local street food favourites Little Bao Boy and their menu starts with breakfast – how does a homemade bao bun, filled with smoky bacon and sriracha ketchup sound?

Their main bao menu starts at 11am and is available all day. Try the KFB, which comes filled with boneless chicken thighs marinated in Gochujang buttermilk and served with lettuce and sriracha mayo. Or how about the Chilli Salt Tofu? It’s packed with tofu deep-fried in their homemade salt and pepper mix with cucumber spring onion, sriracha sauce and hoisin. They also have a couple of specials on the go, like the Mushroom and Chive Dumplings, and between 11am and 2pm you can try the Kimchi and Beef or their Sesame Miso noodle soup.

It’s all served up in a really cool venue – the North Brewing Co. Tap Room is one massive room with a Scandinavian inspired decor. It takes inspiration from Danish brewery Mikkeller’s bars, so expect light wood tables and walls, floor-to-ceiling windows, multi-coloured tiles, and industrial fixtures and fittings, with pops of colour courtesy of the plants dotted around the room.

North has put Leeds on the craft beer map over the past two decades, and this is just the next step. Their seemingly endless stream of craft beer and those delectable Asian street food dishes, make the North Brewing Co. Tap Room a must-try. Give it a whirl…