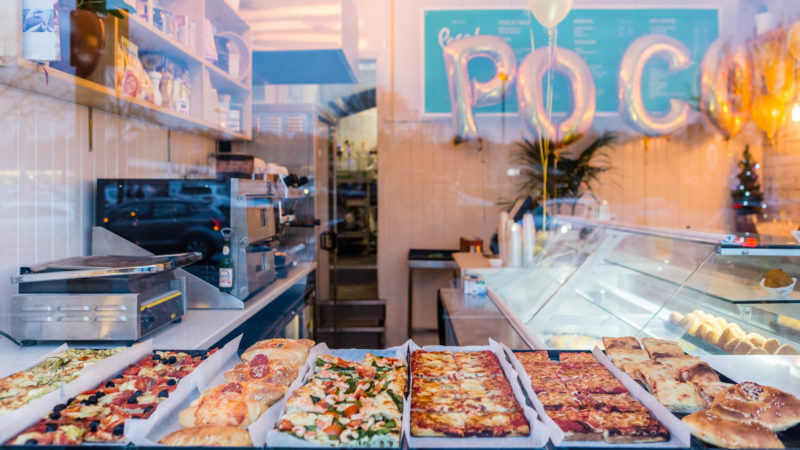 Poco may be brand spanking new, but Elvi Drizi, the man behind it, is no stranger to the city’s food and drink scene. You see, he already has a successful restaurant here. Culto has won rave reviews and a hoard of regulars for its tasty Italian eats, but Elvi always had this niggling desire to open a takeaway and that’s exactly what he’s done.

“I’ve had this idea for quite a while,” Elvi explained. “Pizza al taglio was always something I had in my mind, and I met Nunzio, who is a similar chef, and told him my ideas, and he agreed that it was a very good idea, so we worked on it for a few months and came up with a menu.”

That menu is what’s going to bring you here. The venue itself is small and intimate – you can eat in, with a few stalls opposite the counter, but it’s really designed for taking out, and that’s what makes it exciting because this is one hell of a takeaway. They specialise in four things – pizzas, arancini, rotisserie chicken and cannoli, although you can also get focaccia sandwiches and they’re plotting all kinds of daily specials.

So let’s start with the pizzas. The menu keeps it simple with just two options, but in reality you get a lot more choice than that. You can choose from a whole range of meat and veggie pizzas, including their wonderful stuffed slices. When we visited, they had pepperoni and prosciutto for the meat eaters, with margarita and mushroom for the veggies, but you could tuck into anything from prawn to Mediterranean veg when you stop by because they change them every day.

The toppings aren’t necessarily the highlight though, it’s the pizzas themselves. They use authentic ingredients, imported from Italy wherever they can, with fresh veg and meat from local markets – and that’s just part of the story because they cook it the Sicilian way too. In fact, they use blue iron trays made in Italy – it’s the best iron for pizza and the result is absolutely sensational. It creates a light, fluffy pizza base with a crisp bottom – you might want to order more than one slice. They’re about £3 each, so you won’t exactly break the bank.

But then again, there’s so much more to try here. Their arancini balls are much bigger than the norm, and like the pizzas, their fillings change daily. You can go veggie, get it stuffed with meat or try their dessert option – a giant arancini ball filled with Nutella. Crispy on the outside and gooey in the middle, these are little hits of heaven, but on their own, they’re probably not enough to fill you up. They’re only about £3 each though, so you can easily combine them with something else – like their rotisserie chicken.

This is where Poco stands out. When you walk in, your attention will be drawn to the pizzas slices and the arancini, which adorn the counter, but don’t discount the chicken. They marinate their birds for 24 hours before roasting them, and serve them up with your choice of sides – the potate rustiche are out of this world, soft roasted potatoes loaded with flavour thanks to a coating of herbs and olive oil. If that feels a bit naughty, they have roasted veg and salads as an alternative. It’ll set you back about £10 for a whole chicken, but they do a half for about £6 and a quarter for about £3.50.

And when you’re done with all that, you can get to work on dessert. If you’ve got a sweet tooth, you’ll have a hard time leaving without it, because the counter is stacked out with traditional pastries and cannolis, which will go down a treat with their coffees. They use a 100% Italian blend and whip up everything from espressos to lattes.

Alternatively, you can try Galvanina – it’s hard to find in the UK, but it’ll give you a real taste of Italy. “It’s an amazing drink, it’s out of this world,” Elvi told us. “It’s 100% natural, made with fizzy spring water and clementine, blood orange or lemon juice. Sicily is famed worldwide for its lemons and blood oranges, they have got a different type of lemon which is very juicy, very strong in flavour.”

They have plans to add Italian craft beer into the mix, so you can stop by for a bite and a cheeky drink, or perhaps even nip by for one after a stint in The Cardigan Arms, which is just next door – but you’ll have to wait for that, one step at a time.

Either way, Poco has already become one of our favourite lunch spots, although it’s a little too far from the office for our liking. Check it out next time you’re in Kirkstall, or hell, go out of the way for it. Somehow, we don’t think you’ll regret it. Oh and if you’re wondering why we’ve said ‘about’ with all the prices, it’s because it’s ever-so-slightly more expensive to eat in.