Fresh pasta and craft beer in a new indie favourite. 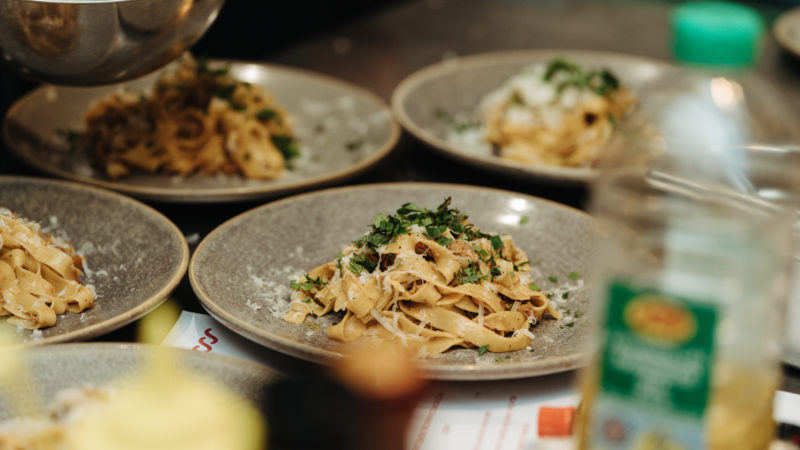 If you love pasta, you need to check out Sarto, stat.

Sarto a pasta-focussed restaurant from two of the most popular independents in Leeds. Dave Olejnik from Laynes Espresso has teamed up with the people behind The Brunswick to transform the former Ipsum Vinoteca at Munro House into a cool, new place to tuck into fresh pasta. It’s made in-house daily and turned into exquisite dishes using locally sourced produce.

The idea came to Dave a few years back. He wanted to create a space where pasta was at the forefront, but while quality was really important to him, he didn’t want it to define the restaurant itself. “Sarto goes back to my love of that Italian food culture and the way that food is a vehicle for social interaction,” he told us. “I’m not looking for formal fine dining. I like it when food is just out and people are talking over it. They’re moving it around, they’re sharing it and they’re reaching across. The intention is to be that kind of a venue, so the food is a vehicle for socialising.”

When the space at Munro House became available, he saw an opportunity to turn his idea into a reality, but he didn’t want to go it alone this time, he wanted to create a team that could perfect every aspect of Sarto. That’s where the guys from The Brunswick came in. They’ve helped him curate the drinks offering, and Head Chef Ian Chapman, better known in Leeds as Yanni, is known for his love of pasta dishes, so he’s been instrumental in launching the restaurant.

Together, they’ve put their own stamp on the unit. It’s a spacious bar and restaurant that’s surrounded by great big floor-to-ceiling windows. They’ve combined traditional tables and chairs with a big open kitchen that lets you see the masters at work. You can even sit and watch from stool at the counter. The front of the space has more of a beer hall vibe, with long benches where you can sit down to enjoy a pint and maybe a bite to eat (it’s hard to resist the aromas coming out of the kitchen).

The atmosphere might be informal, but there’s a real focus on attention to detail here. You can see the chefs making fresh pasta in the open kitchen as they mix organic eggs and Italian wheat with a secret flour never used before in the UK. This isn’t strictly an Italian restaurant, because they’re not doing the traditional dishes you’d find in Italy, they’re going to experiment with fresh local produce (wherever possible) to create unique plates of food.

The menu will change on a regular basis, they’re going to let the seasons dictate it, but on their first menu, it’s pretty straightforward. You can start with their snacks, a series of small plates perfect for sharing. There’s pumpkin, sage and Cornish cheddar arancini alongside heirloom squash, mint and almond gremolata, but if you just want to keep it simple, they’ve got olives or burrata served with salsa verde.

The mains are generously sized, so make sure you come hungry. Right now, they have fettuccine, spaghetti, radiatore, rigatoni and gnocchi coming out of their pasta press, but the aim is to bring all kinds of weird and wonderful pasta to Leeds. For now, you can try fettuccine with wild mushrooms and marsala cream or rigatoni in red wine with lamb shoulder, sheep rustler and mint.

If you need somewhere to start, Dave gave us his personal recommendation. ”The radiatori is great because the pasta’s shape is designed to hold onto sauce,” he told us. “It comes with a really nice cooked down tomato-based sauce with basil and bocconcini, which is like small little mozzarella balls. It’s super simple but the pasta grabs hold of all that sauce and all that flavour as you pull it out of the dish. It’s those sorts of things that I like, there are only three ingredients but they balance out so well that you don’t need any more.”

When it comes to drinks, the boys from The Brunswick have really come through. They’ve sourced a range of beers that has something for everyone. You can get Amstel and Moretti if you’re a lager drinking, but if you like your craft beer, they’ve got to have guest lines from the likes of Manchester’s Öl and local favourites North Brewing Co. as well as a hefty selection in bottles and cans.

Prefer wine? They’re working with two of the city’s finest wine suppliers in Latitude and Wayward, so you can try an eclectic range that will change on an almost weekly basis. Whether you want red, white or rose, they’ll have the perfect bottle to go with your food. And alongside that, there will be a small cocktail menu, as well as house spirits from the Sustainable Spirit Co. and coffee from Laynes.

Sarto is single-minded in its aim. It’s a social restaurant where you can tuck into fresh, tasty pasta day in, day out. And since the menu is ever-changing, no two visits will ever be the same.