Get an authentic taste of Poland at Smak! 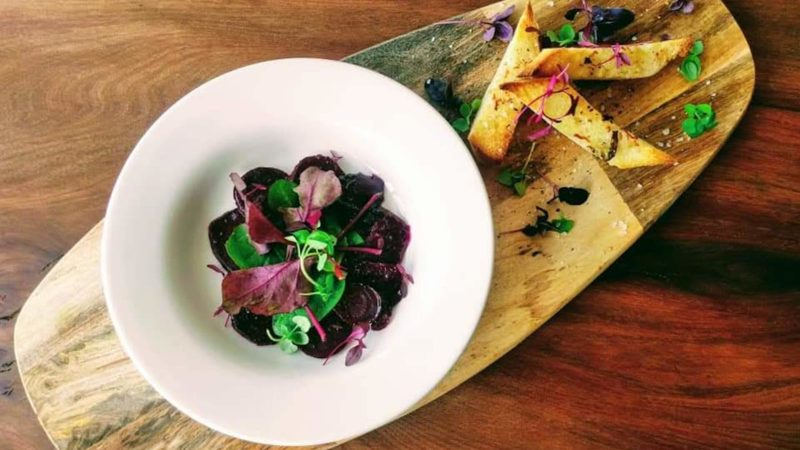 Polish street food now has a permanent home in Leeds as Smak! has opened its new restaurant in Kirkstall.

Smak! is one of the most popular street food vendors in Leeds, and you can now tuck into their authentic Polish eats every day of the week. They’ve just opened up a new restaurant on Kirkstall Road, opposite McDonald’s, so you’ll need to head out of the city centre to get your hands on their traditional kiełbasa, pierogi and żureks.

It really is a family affair. It’s owned by Monika and Neil Campbell – they used recipes handed down from Monika’s butcher grandfather to make Smak! the success it is today. It’s come a long way in a short time – when their kiełbasa sausages got rave reviews at a family barbecue in 2014, they decided to take the plunge and apply for a stall at Kirkstall Abbey Deli Market. From there, they went on to sizzle their famous bangers at street food events all over the UK.

Fast forward four years, and they’ve taken another big step – by opening a permanent shop. It’s a small but welcoming cafe-style eatery filled with reclaimed furniture and materials that give it a rustic but contemporary feel as well as various touches that link back to Monika’s Polish heritage – but it’s still all about the food. “I want to recreate the wonderful dishes I enjoyed during the time I spent with my grandparents for others to experience. We work hard to ensure that the age-old methods are maintained, while also making sure that wherever possible, we use ingredients from local suppliers,” Monika told us.

The menu is an extension of what they’ve been doing so well at their street food events. The main focus is still kiełbasa. Every single sausage is smoked and cured on a Yorkshire farm 20 miles outside of Leeds and each one is done to their traditional family recipe. They have three different versions for you to choose from – the Hunter is a classic pork and beef, the Garlic is the same but with added herbs and garlic, and The Angry Bull comes with chilli. Each sausage is served in a bread roll with homemade slaw, Polish gherkin, cheese and horseradish sauce.

But it’s not just kiełbasa anymore – they’ve extended their menu to include other Polish delicacies. Their pierogis are incredibly popular. Each one of these Polish dumplings is made by hand and filled with the most delicious things. The Ruskie is packed full of country cheese, potato and spinach, while the Mięsem promises ground pork, beef and herbs, and the Cieciorka is loaded with smashed chickpeas, sun-dried tomatoes, garlic, herbs and spices. Whichever you choose, it’ll come with spring onions, bacon lardons and a pot of sour cream, but keep an eye out for their fruit fillings too, which turn this savoury staple into a sweet treat.

You can also work your way through a range of żureks, a traditional Polish soup usually eaten at Easter time. It’s a hearty dish that brings together kielbasa, smoked pork, bacon, egg and potatoes all in one pot. They also do bigos, which is known as hunter’s stew, a range of fresh salads, like raspberry and tomato with white onion and red wine dressing, or you can go for open sandwiches, which come topped with the likes of chicken and avocado or smoked mackerel paste. Not only is it tasty, authentic grub, it’s also yours for a bargain price – no dish costs more than £5.

And you won’t go thirsty either. Although they don’t serve alcohol (yet), they have a wide selection of tea, homemade lemonade and fruit juice, as well as kompot – this old-fashioned beverage is made by cooking fruit in water and it’s sweetened with honey and unrefined sugar. It changes with the seasons, so in summer it’s a cold drink made with strawberries, blueberries, apples and cherries, while in the winter, it’s served warm and made using dried fruit like apricot, raisins and prunes.

If you need a marker as to how good Smak! is, it should come from the fact that the city’s Polish community have embraced it. That’s always a hallmark of quality, as Monika told us, “For most people, I hope they try us out because we’re something a little different. We’ve had some wonderful feedback, and really special experiences like the woman who came back to us with tears in her eyes saying ‘this is just how my grandmother made it’. I’m proud of my heritage and also proud to be part of British society, our aim initially was to introduce Polish cuisine to British people, but I’m also thrilled that many people from Poland who have also settled here come to dine with us.”

Smak! is a true Leeds success story – it’s great to see a family recipe transformed into a street food sensation that’s now developed into a fully-fledged eatery. Give it a go next time you’re in Kirkstall, or just make the extra effort and go out of your way for it.