New to Leeds: The Malt Brewhouse

Horsforth’s latest addition is a new pub and microbrewery. 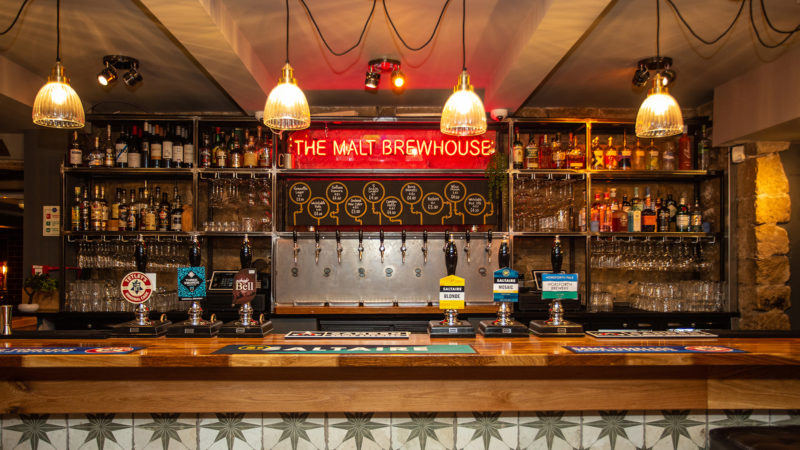 Bar 166 and Bistro was one of Horsforth’s most popular venues, but times have changed, so it’s completely reinvented itself. The old venue has been given a new lease of life with a brand new £200,000 concept – The Malt Brewhouse is a modern pub that specialises in real ale, craft beer and cocktails with a menu of tapas-style nibbles and flatbread pizza. But what makes it really special is the fact that they’re opening an on-site microbrewery in 2019.

“We had some great memories, but this last few years there have been more and more restaurants arriving in Horsforth, which has made trading inconsistent,” Ben Warren, Operations Director for Concept Taverns, told us. “It made us think about our own future, whether to refurbish and freshen up Bar 166 or try something completely new. We have always been inspired by new trends and wanted to bring something new to Horsforth. It started with the idea of a microbrewery and went from there to include entertainment and more a casual food offering.”

The venue has been given a complete makeover. Gone is the split between the bar and the restaurant, it’s now given way to a smart open-plan space that brings together leather booths, exposed brickwork, atmospheric lighting and an open kitchen. The food and drink sits together side-by-side in a bar that has a more laid-back, sociable atmosphere.

The menu has been designed to suit the ambiance, so it now focuses on casual dining. Their small plates range from Garlic Dough Balls to Steak Meatballs, Battered Prawns and Mozzarella Salad. But they also do a quartet of sharing boards. Try the Baked Camembert, it comes with slow-roasted garlic, rosemary and warm bread. Or you can get The Sausage Board, which promises a feast of pork and leek, Cumberland and Old Spot with mini roast potatoes, pickles and mustard. Don’t fancy sharing? They’ve also got a tantalising line-up of flatbread pizzas. They’re lighter than your usual doughy bases, hand-stretched and topped with everything from parma ham to olives & artichokes.

Need a hand deciding? Ben gave us a couple of recommendations, “Try the Pulled Pork Bao Buns. A few years ago the owner Ben went to Japan to visit a brewery and didn’t stop talking about them on his return, so they had to go on the menu. And the Mini Chorizo Sausages. We had these at a wedding recently and couldn’t get enough, since then we have been waiting to get them on a menu.”

To wash it down, you’ve got loads of beer. There are six rotating cask lines dedicated to local breweries like Horsforth, Kirkstall, Leeds, Saltaire and Ilkley, as well as 10 keg lines which will feature UK craft beer, lager and Guinness. Their on-site microbrewery is currently being built in their brand new extension and will open in the New Year. It has the capacity to brew around 2,400 pints on a weekly basis and will pump their own craft brews directly from the tank into the bar.

You won’t be short of entertainment either. They’ve got Horsforth’s first shuffleboard table and there will be live musicians every week. Don’t miss any of the big games, as they’ve installed four 50-inch digital screens that will show both Sky and BT Sports.

Bar 166 and Bistro was a much-loved eatery for many years, but this is a new era as The Malt Brewhouse gives the popular Horsforth haunt an exciting fresh start. Give it a whirl…