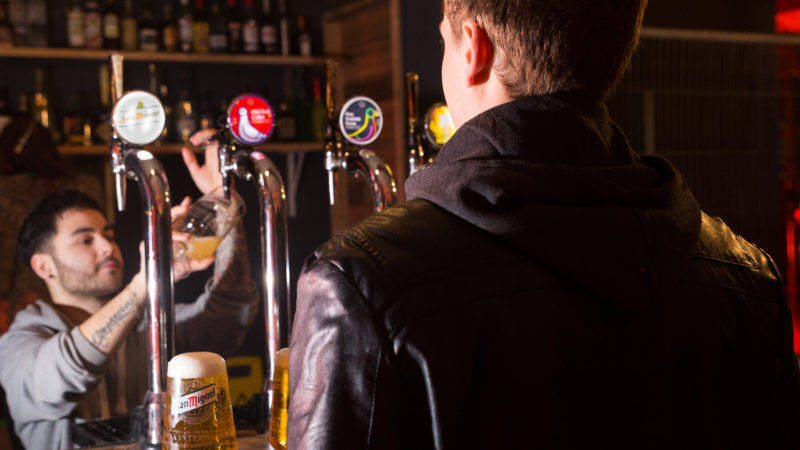 Taking an out of use relic of the city’s past, the opening of The Old Red Bus Station sees Leeds get itself a brand new venue that will celebrate food, drink and culture.

Built in 1936, The Old Red Bus Station has been sat forlornly on Vicar Lane, since the buses moved to their new home over 20 years ago. Until now, that is, as the old building has been transformed into the city’s latest cultural, food and drink venue.

It’s the work of Champion Up North, a Leeds based creative agency, magazine and event promoter that saw the huge potential of the building and decided to turn it into a thriving hub for the city’s creative impulses. They’ve moved from their original home, The Base, to the new venue – and the expansion has given them the chance to increase their activity. One of the people behind The Old Red Bus Station is Nancy Taylor, and she told us why they decided to take the plunge. “We saw bringing back to life such a significant building as an opportunity to reflect our love of Leeds. Leeds already has some amazing independent venues but we wanted to open a new space that focuses on providing raw, cutting edge music and art entertainment without the price tag.”

Split across two floors, it will have a bar and canteen on the ground floor, with an art space on the first floor. “We plan to recognise and support local artists and shine light on the talent in Leeds.” Nancy explained, “Although, we will also utilise our connections across Europe to bring in some new artists that Leeds hasn’t seen before.” That counts for gigs as well as exhibitions, as they’ll be hosting plenty of shows in that upstairs space too. You don’t have to be a culture vulture to visit though. Their ground floor is dedicated to food and drink, with a menu that takes inspiration from across Europe, while the bar will offer up a range of local and global craft beers, alongside an extensive cocktail menu.

Foodies can delve into a choice of three or four dishes, which change on a daily basis, depending on the local produce they can get their hands on. It’s got a canteen feel, so there’s no table service, but you’ll be able to go up to the counter and pick your meal. It’s been carefully thought out too, offering something for carnivores, veggies and vegans.

You’ll need something to wash your food down with and they’ve certainly got that covered. They’ve catered for Leeds’ craft beer aficionados with the likes of Brooklyn Lager, Flying Dog, Erdinger and Grimbergen sitting alongside more traditional lager brands like San Miguel. You can also sup their own beverages too, aptly named The Old Red Bus Station Brew and Old Red Bus Station Cider. More interested in spirits? They’re putting together a full cocktail menu that makes full use of a wide range of liquor that will be on the back bar including Portobello Road Gin, El Jimador tequila and Santa Clara limoncello, as well as a range of whiskies and vodkas.

All this will be served up in a venue that’s cool and modern, while staying true to its history. “We love how unique the space is and we want to preserve as much of the original features as possible.” Nancy told us, “The bar has been built from reclaimed wood from the site, and we have exposed the steel supports, herringbone floors, brick walls, and concrete ceilings to create an industrial vibe.”

But it’s not all original. True to their artistic nature, they’ve added their own personal touches to the building, creating a place that’s cool and contemporary, but also a comfortable place to hang out. “We really wanted the space to be inviting.” Nancy explained, “While we want to keep the space minimalist, we will be showcasing some murals from artists who come to visit such as French artists Jiem and Mary Limonade. I think this will make the space really unique and definitely worth a visit.”

Champion Up North and The Old Red Bus Station are in a pretty odd situation though. Their venue is on the space earmarked for the next phase of the Victoria Gate development, so there’s no guarantee that they’ll last past their 5 year lease. But rather than seeing this as a negative, they see it as the perfect opportunity to get the most out of the venue, before it reaches the end of its shelf-life.

The Old Red Bus Station has served Leeds well, and though it’s a shame to see anything historic disappear, its reinvigorated tenure as a food, drink, arts and music venue guarantees it a good send off. And with such a varied offering, there’s something there for just about everyone.