There’s a new carvery in town and it ain’t just for Sundays. 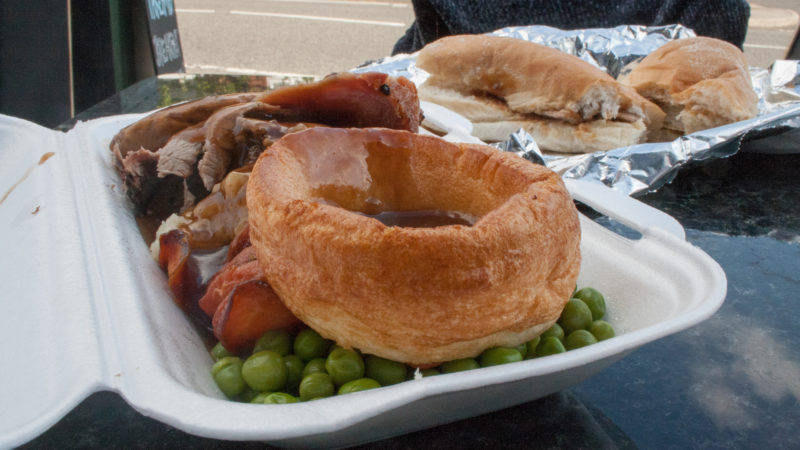 Fancy Sunday lunch every day of the week? That’s what Man v Roast is all about…

The carvery is a bit of a tired concept – or at least it was, until Man v Roast came along. This new Hyde Park venue has a no-nonsense approach that will see you in and out within 20 minutes. You can get quality roast meats with all the trimmings in a takeaway box for less than a fiver and you have the option to eating in or out.

It’s the brainchild of Nick Kenny, Matthew Hughes and the latter’s son, also called Matthew Hughes. They’re all locals, with varied careers and backgrounds, who’ve come together to breathe new life into your roast dinners. To make it happen, they’ve bagged a renowned chef, Damien Payne, who’s worked at The Roebuck Hotel and The Hospital Club in London, to run the kitchen.

Nick told us how Man v Roast came about, “We are just passionate about food, there are three of us in total and we were sick of getting low quality carveries – low quality meats, poor veg or poor meat choices at quite a high price so that’s the reason. It came down to it, and we just thought we could do a better job than that, and we have definitely done a better job so far!”

You’ll find Man v Roast at 144 Cardigan Road, in the former Murtons Bakery, which was something of a Hyde Park landmark. They’ve completely transformed the old venue, giving it the feel of a 70s pub with steampunk-style oddities and curiosities dotted around. It’s only small, and is dominated by their long Chesterfield-style carvery counter where you can see the chefs at work, with four granite tables inside and another four outside.

It’s not the venue you come for though – it’s definitely the food. Their main offering is the carvery box, which is a proper Sunday dinner for just £7. They source all their meats from Sykes House Farm, and you get to choose two different types. There’s turkey, beef, gammon, pork, sausage and lamb. It comes with all the trimmings, from stuffing, carrots and peas to mash, roasties and cauliflower cheese, with a Yorkshire pudding on top and lashings of gravy. There are also special carvery boxes for kids and vegetarians as well as halal chicken for the local Muslim community.

Nick’s got his own favourite, but everyone’s different, “I like lamb, so that is my favourite. I like a lamb and mint sauce with a bit of stuffing and gravy on there – but, people can have what they want, we are not limiting them to what they can have.”

If you don’t want to go all out with the full roast dinner, you can settle for a hot roast sandwich. There are seven options, from beef and horseradish to turkey, stuffing and cranberry, which start at £4.50. It doesn’t stop there either – you get your choice of gravy, stuffing and sauces for free and there are a range of sides if you want more, think gravy pots and boxes of roasties (now we’re talking).

Got space for dessert? They’ve got a treacle sponge with custard – or you could always go for a traditional bread and butter pudding. And if you’re passing by on a morning, it’s open from 8am between Monday and Friday, so you can get the day started with their breakfast in a box, filled with Cumberland sausage, bacon and egg. They’ve even got a Yorkshire Pudding Pasty with your Sunday roast encased inside.

There’s more – the inspiration for their name comes from the ever-popular ‘man v food’ challenges and they’ve got three. Play it safe with the Bull’s Eye Challenge which will get you a carvery box for a quid if you hit the bull’s eye in three tries. If you can handle the heat, try the Red Skull Chilli Challenge for £4 – it’s a sandwich covered in a Carolina Reaper and Scorpion chilli sauce. Or there’s the 5 Butty Challenge, and this one isn’t for the faint-hearted, it’s your choice of five meats, spread across five 8-inch breadcakes and you get it for free if you manage it. Crikey.

“It’s new, it’s unique, there is nothing really like this,” Nick told us. “You don’t get anywhere that is just a carvery, it is normally a boozer as well. We are serving food to people that are generally sober, so you know the food has got to be good. It is fast turnaround – within 15 to 20 minutes you have eaten and you have gone. It is a fast food carvery but that doesn’t take away from the quality of it, it still has to be really excellent.”

And it really is. We’ve been and we’ll vouch for it. In fact, we want to go back for seconds. It’s a quality Sunday roast for a fiver, with the flexibility of eating in or taking away. At that price, why wouldn’t you?