The 10 Best Salads in Leeds

Craving veggies? A salad it is!

Whether you’re looking to knock out all of your five a day in one sitting or you’re just craving some fresh, nutritious veggies, this is the list for you.

On a diet? Need some balance? Having a salad needn’t bore you to tears, instead, indulge in these beauties. We’ve got gloriously crisp falafel, marinated beef and chargrilled chicken tossed on a bed of crunchy salad leaves, quinoa or heirloom tomatoes, all drizzled with hot sauce, garlic aioli or hummus. Whatever your preference, these are the salads in Leeds that you have to try. 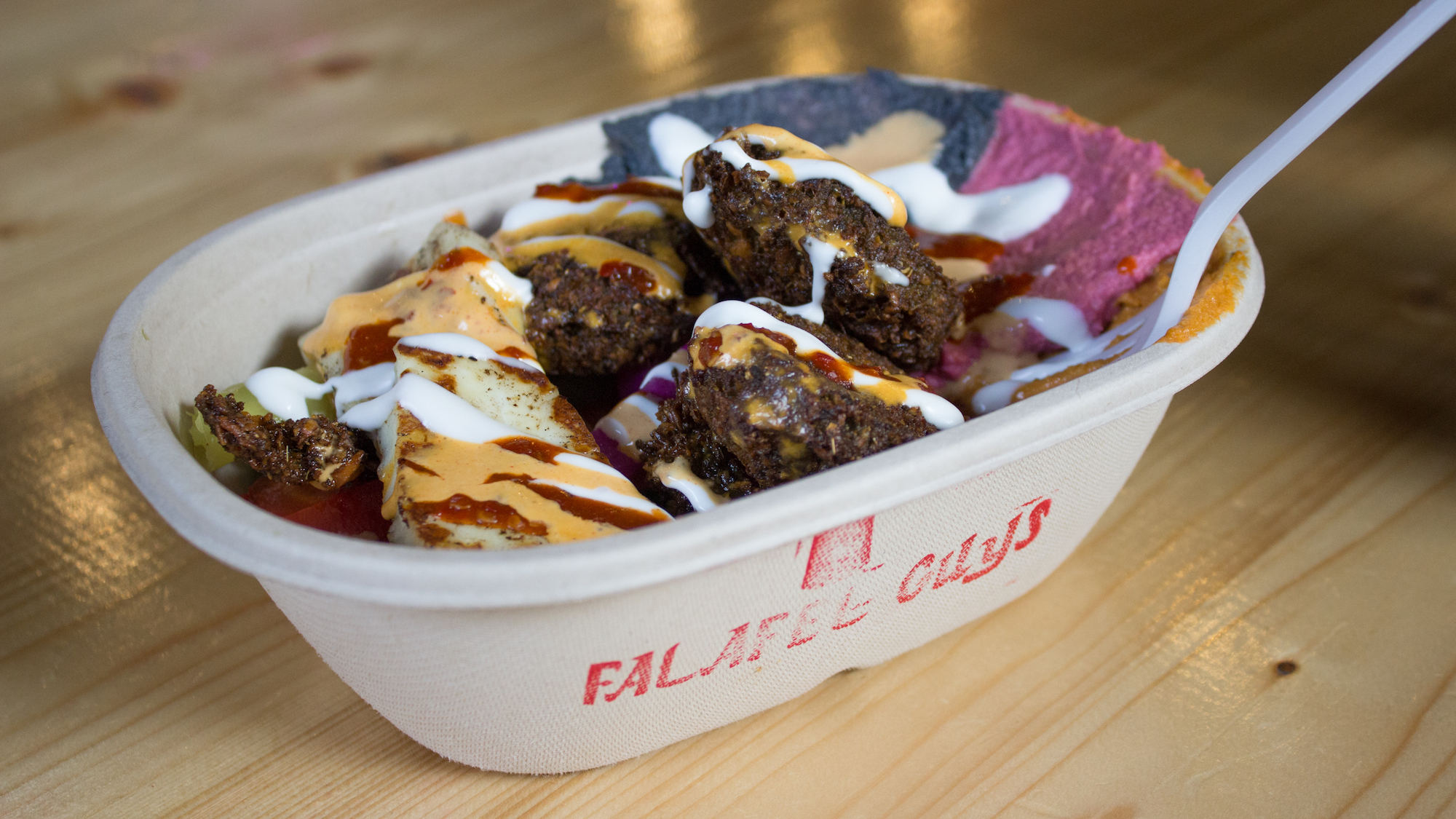 Falafel Guys are well known for their fresh and tasty salads. As the name suggests, the centrepiece is the utterly delicious falafel. Homemade, golden brown and perfectly cooked every time, the falafel is full of Middle Eastern flavour. It pairs perfectly with your choice of leaves, tomato, cucumber, pickles, a smorgasbord of colourful hummus, sauces like chilli and aioli – it’s all fresh, it’s tasty and it’s made right in front of your eyes. Ramp it up another notch or two with grilled halloumi or chicken shawarma.

Doner Salad Box at I am Doner 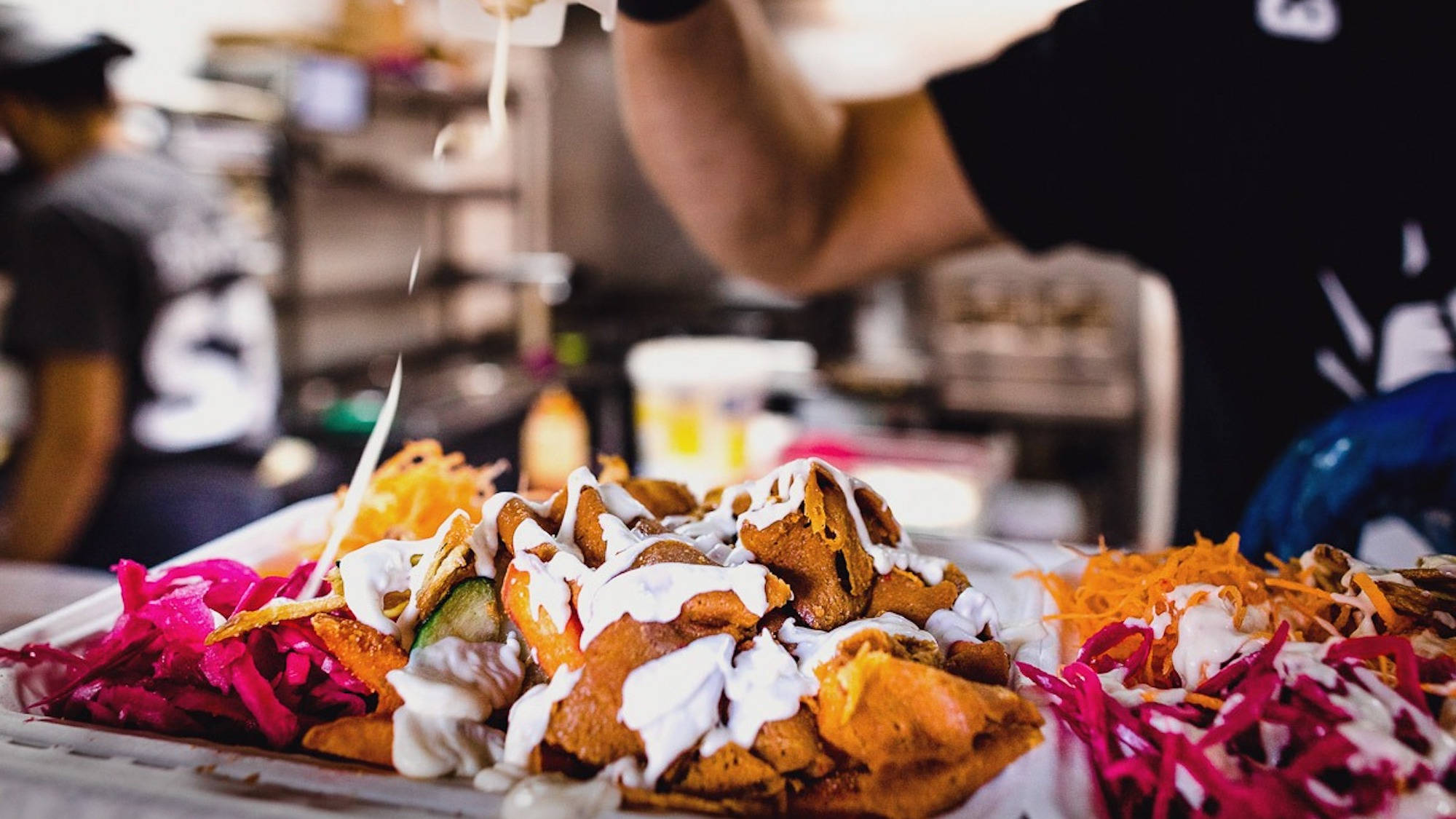 Craving a kebab? Get the best of both worlds by combining a dirty kebab and a healthy salad at I am Doner. Instead of bread, the salad box starts with crunchy mixed lettuce leaves and it just gets better from there. We’re talking crispy fried veggies paired with fresh tomato, red onion, grated carrot and pickled red cabbage. It’s topped with a generous helping of juicy, tender doner meat and feta, which is then doused in hot chilli sauce and yummy garlic mayonnaise for that classic doner finish. 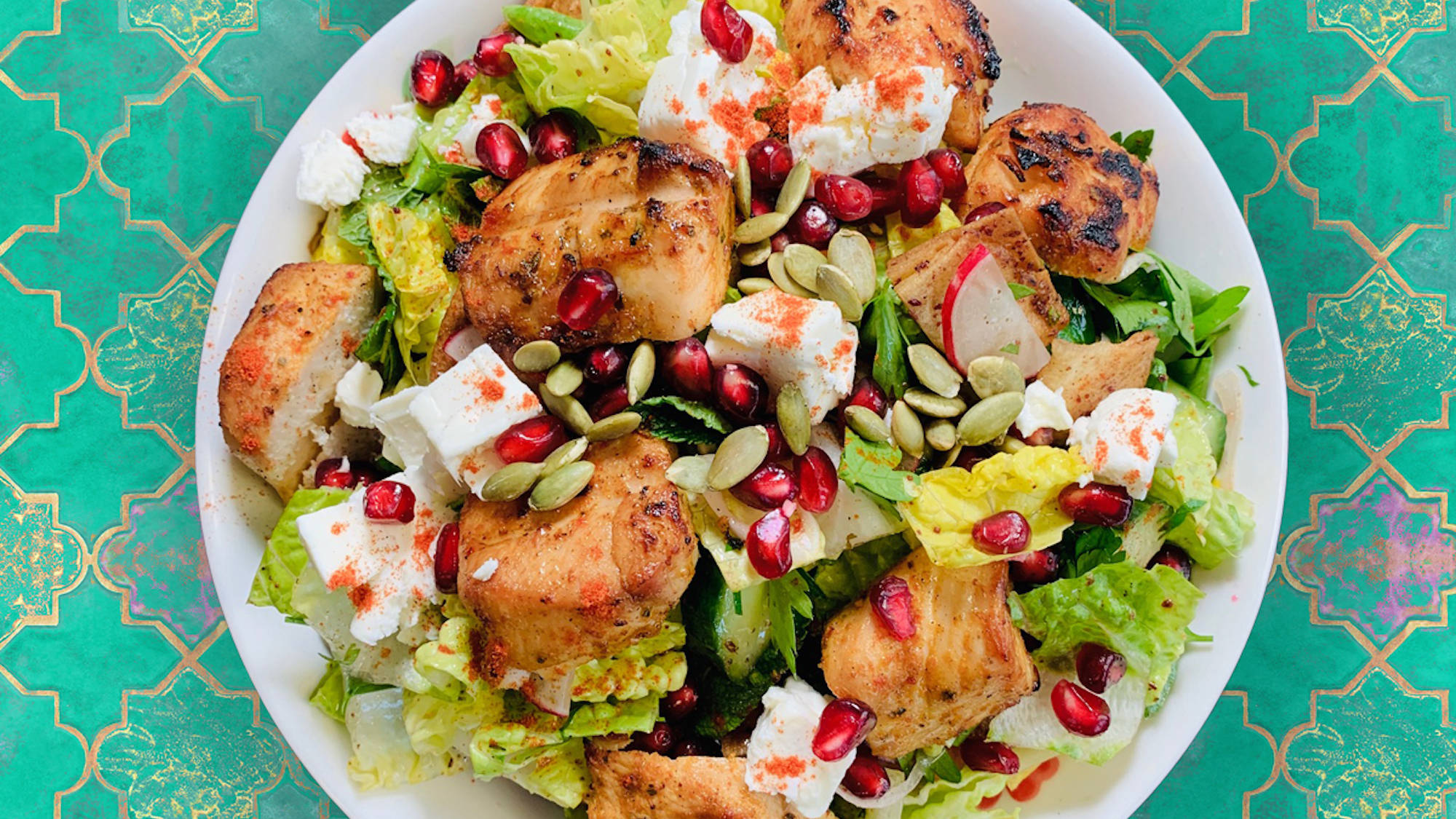 The Sirine Chicken Salad at Comptoir Libanais offers a Lebanese take on a classic dish – and every mouthful is a flavour explosion. Get the combination right and you’ll be munching on chargrilled marinated chicken breast, tangy feta cheese, fresh tomato and lettuce. On top, you’ll find spring onion, mint and pita crisps. A sweet and delicious pomegranate molasses dressing is drizzled on to finish, bringing out the best of all the flavours. Pair with a home-made apple, mint & ginger lemonade to round it off. 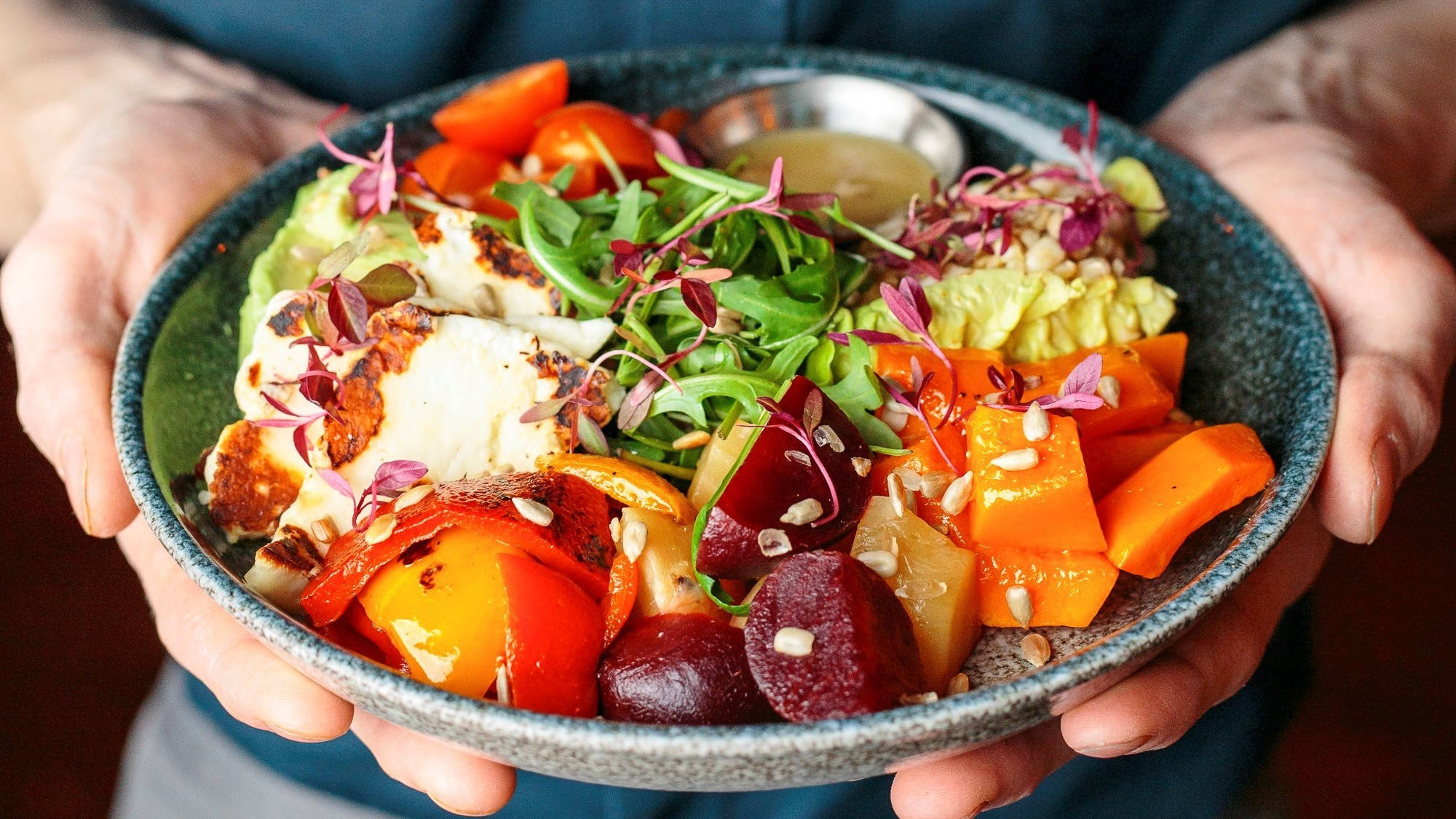 The Revitalise Bowl at Banyan has been designed to be balanced, nutritious and downright tasty. Perfect for veggies and those avoiding gluten, it’s a riot of colour – exactly what we like to see in a salad. It starts with a bed of quinoa, on top of which sits halloumi, roast butternut squash, red & golden beets, avocado, tomato and roasted peppers. It’s finished with a flourish of a superfood dressing. Mix it altogether for a cascade of utterly delicious mouthfuls that are both filling and nourishing. 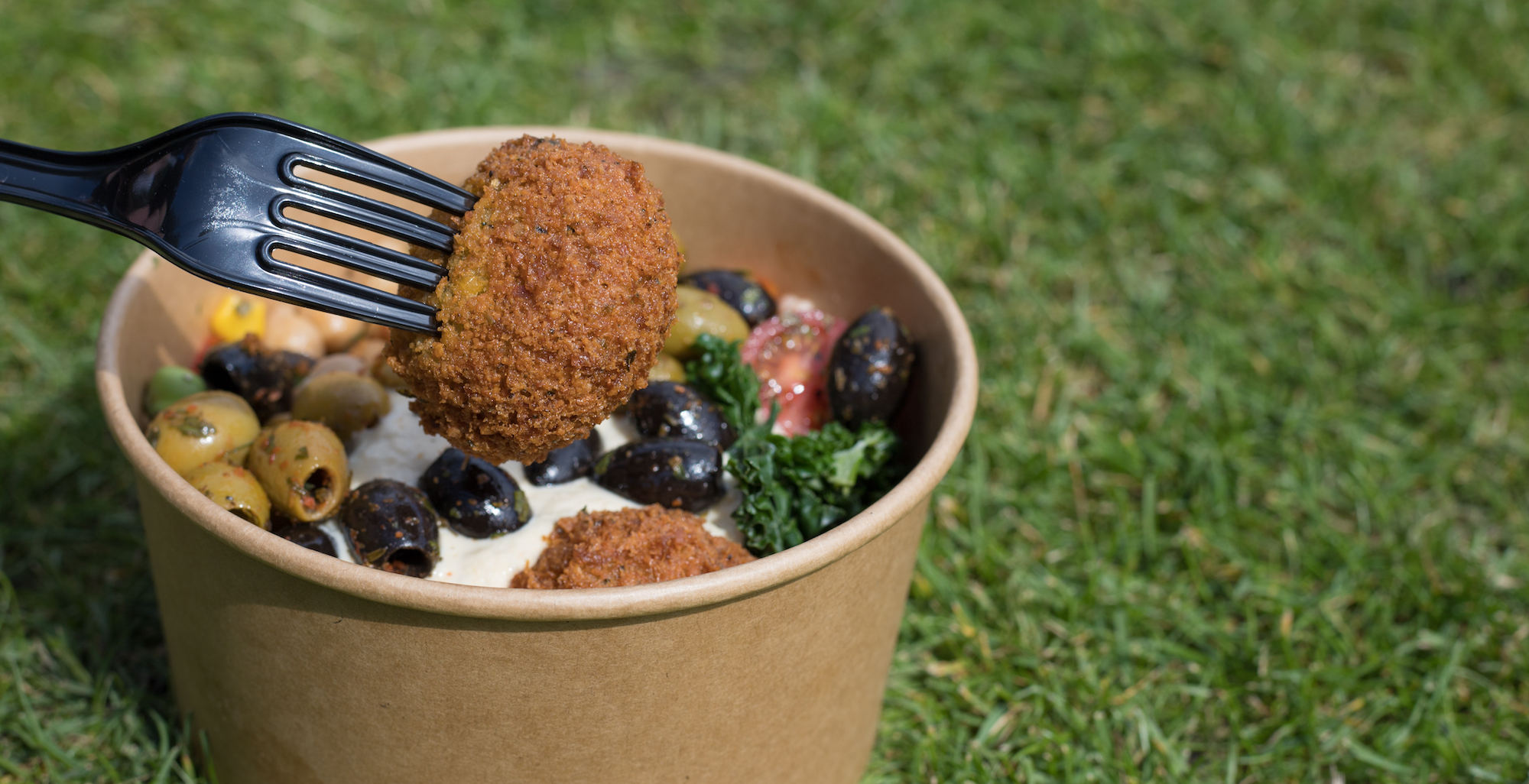 The salad bar at Sesame really is something to behold. Walk into this unassuming deli and you’ll certainly be surprised. It’s fresh, it’s colourful and it’s absolutely irresistible. You can have any combination of ingredients you want, making it one of the best places to get salads in Leeds that tick all your boxes. You could be stuffing your bowl with huge balls of crisp falafel, chilli broccoli, three bean salad, salmon teriyaki, even buckwheat noodles – whatever your heart desires. It won’t break the bank either. 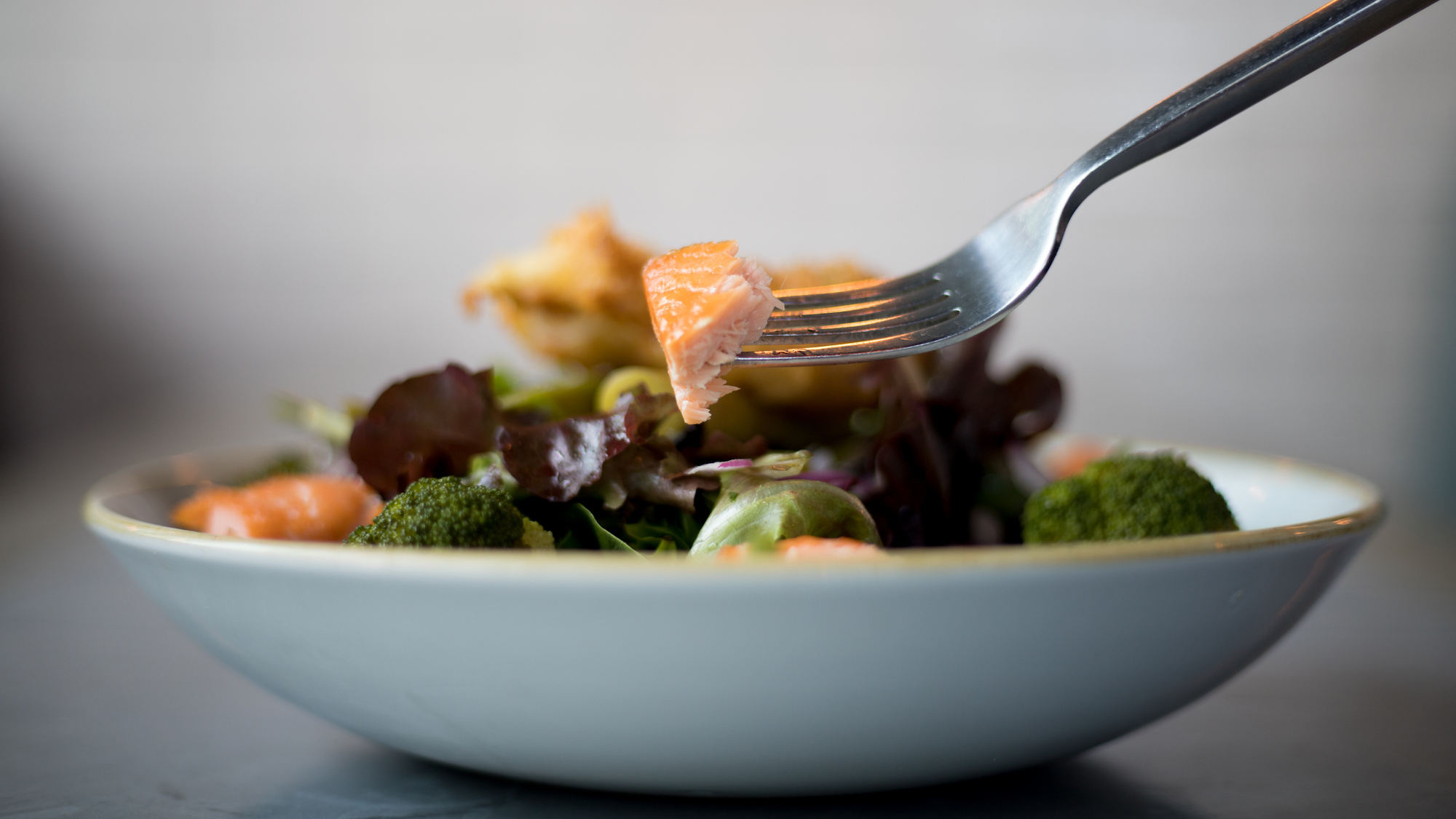 With a menu based around their massive charcoal grill, you wouldn’t think that The Good Luck Club would have much time for salads. Their smoked salmon salad says otherwise, however. It’s something of a masterpiece. We’re talking charred asparagus spears, broccoli and red onion paired with smoky pan-roasted fish and pops of new potato. All of this is atop mixed leaves and cherry tomatoes. It’s completed with a tangy vinaigrette and a gloriously runny poached egg. 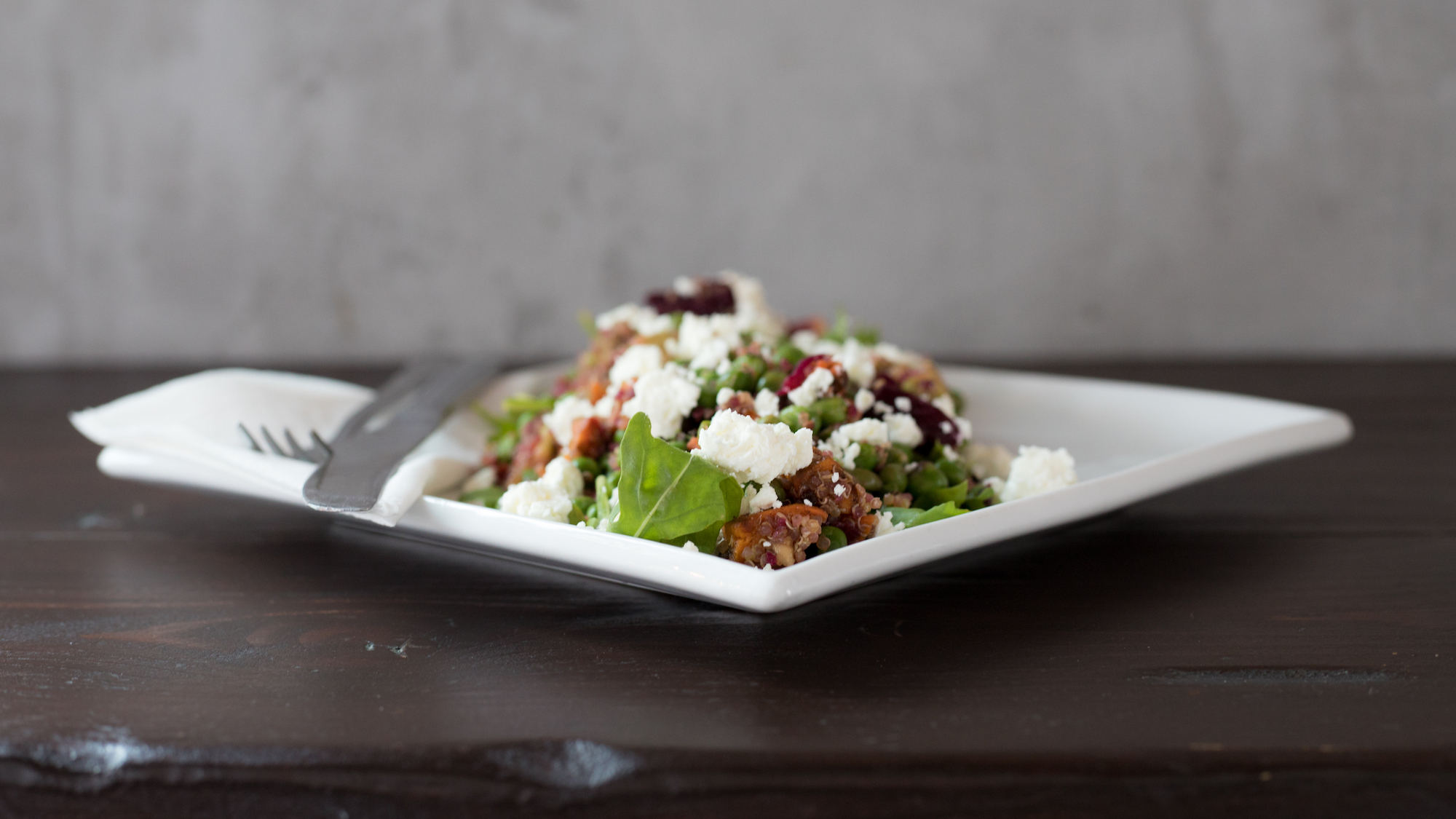 The beauty of the Superfood Salad at Sociable Folk is that you can tailor it to suit you and your discerning tastebuds. The base is always the same – it’s made up of quinoa, avocado, roasted sweet potato, beetroot and peas. You get to choose your protein and your dressing, so it could be a classic chicken and caesar, a yummy falafel and lemon & chilli or a feta and fiery piri piri combination. With six proteins and six dressings, you could have a different combo every day of the week! 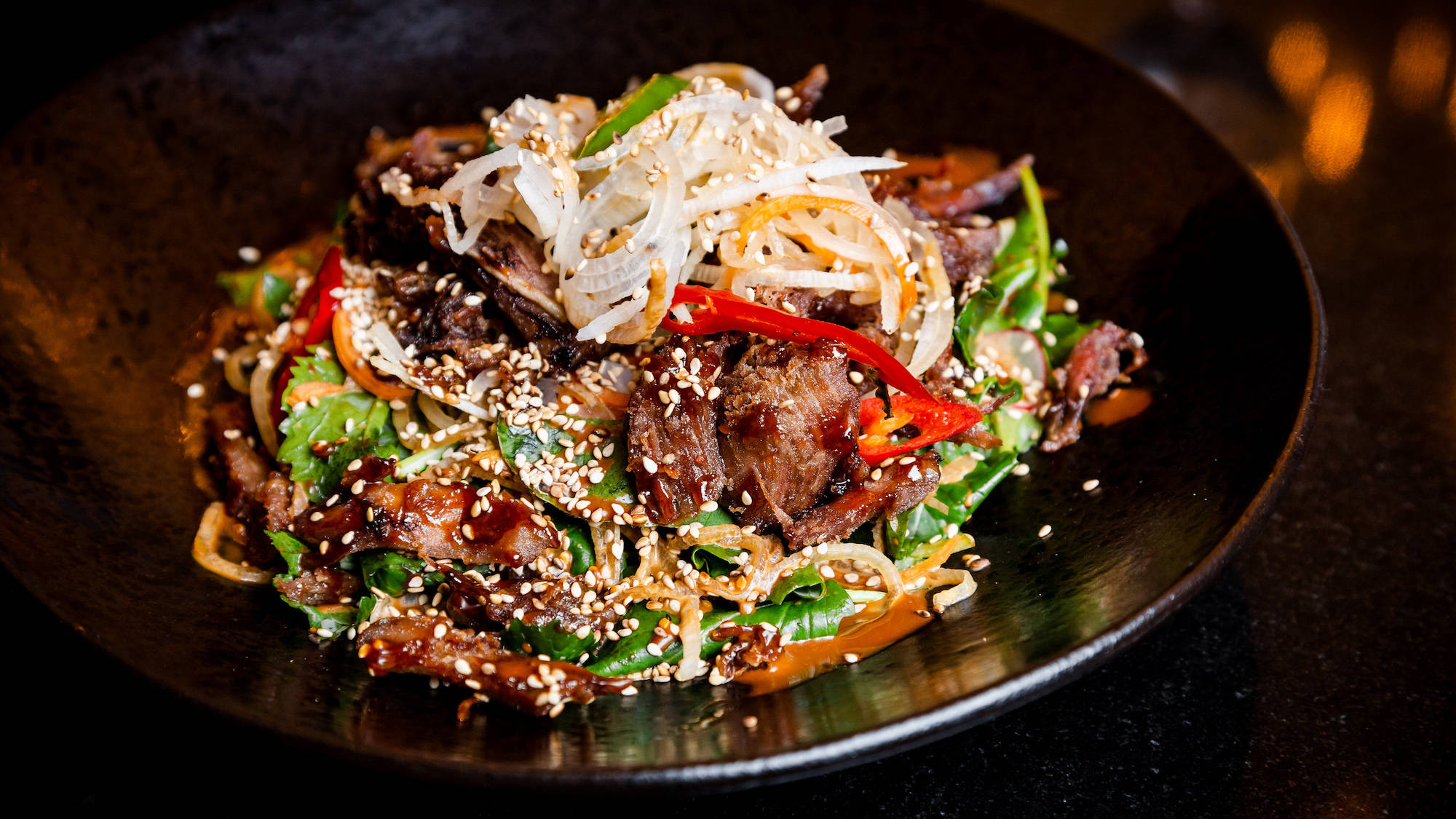 You can settle into the opulent surroundings before tucking into a salad fit for a king at Grand Pacific. You’ll be happy to swap the pancakes for a bed of fresh, light salad with their Crispy Duck take. Load up your fork with a rainbow – the green of the baby kale, the orange of the carrot, the white of the mooli and the red of the chilli combine with the salty duck for a mouthful of flavour. It’s covered with a generous helping of sesame seeds, making it look beautiful and taste slightly nutty. 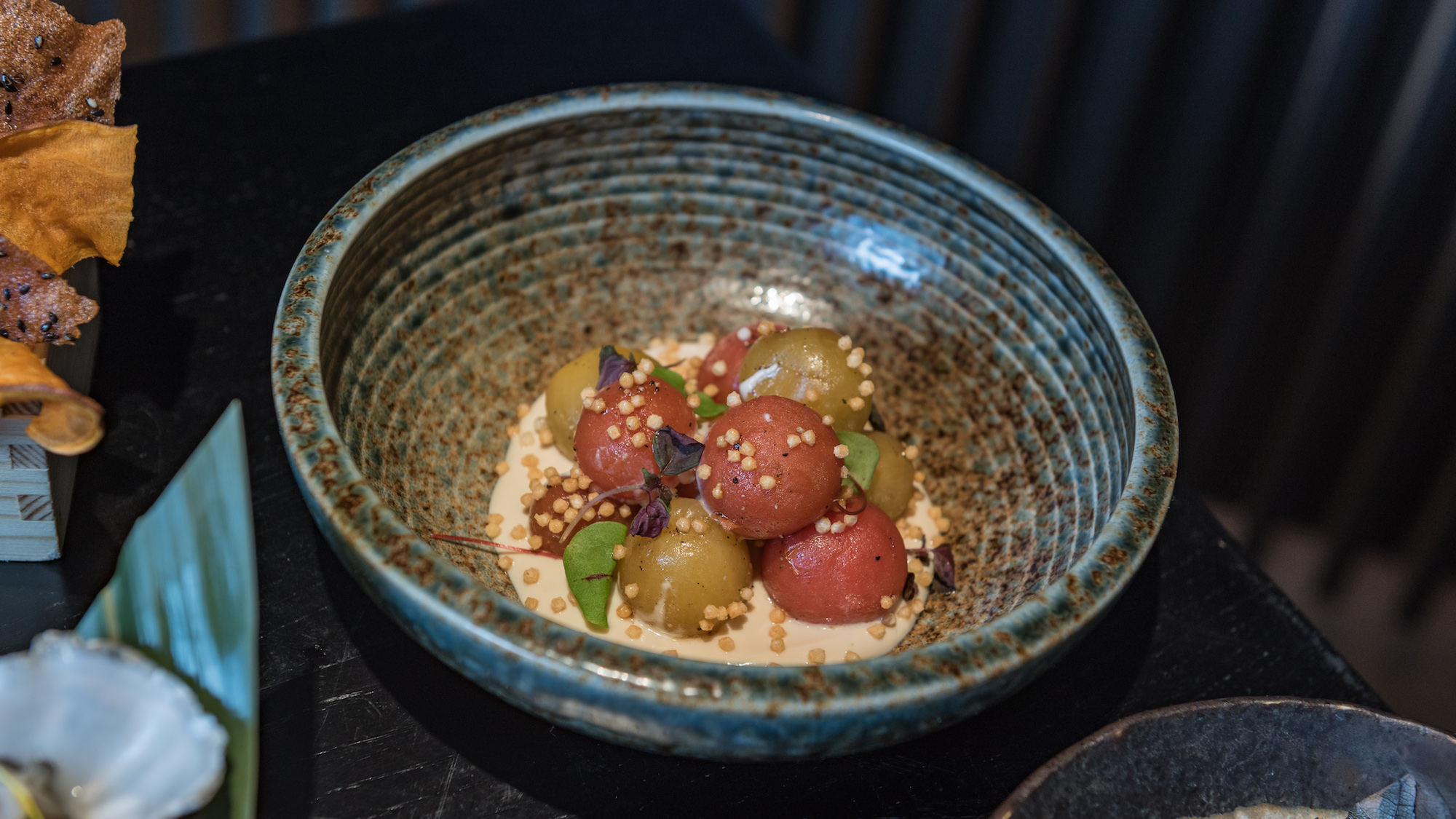 The tomato salad at Issho is probably among the most unusual of salads in Leeds. It’s unlikely to be like any other tomato salad you’ll have ever had. Think tomatoes, tofu and rice and you might come up with a buddha bowl-type scenario, but this is not that, oh no. The red and green tomatoes are peeled and soaked in sherry, the tofu is whipped up into a cream cheese and the rice is puffed up into crunchy pops of joy. Like we said, it’s unlike anything you’ve ever had before.

Scorched Caesar Wedge at The Alchemist 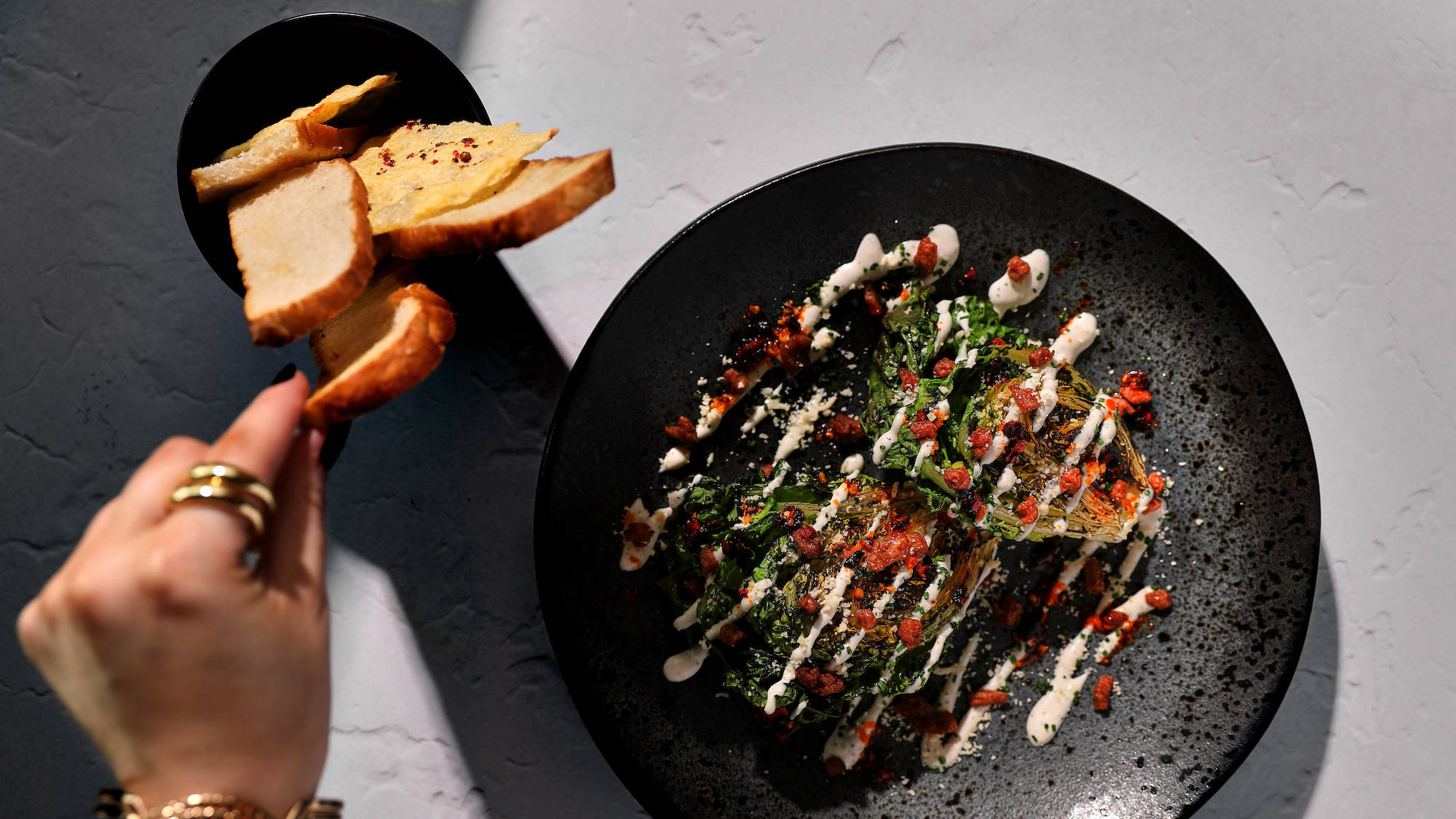 This is a Caesar salad, but not as you know it. Crunchy baby gem lettuce is chopped into wedges and chargrilled to give it a smoky edge. It’s slathered with that delicious Caesar dressing you know and love, sprinkled with plant-based bacon bits and that’s that. To the side, you’ll find delicately toasted ciabatta sticks and vegan Applewood cheese crisps – not your usual croutons and cheese shavings. The whole dish is vegan, though not that you would know it.