The Best Brewery Taps in Leeds 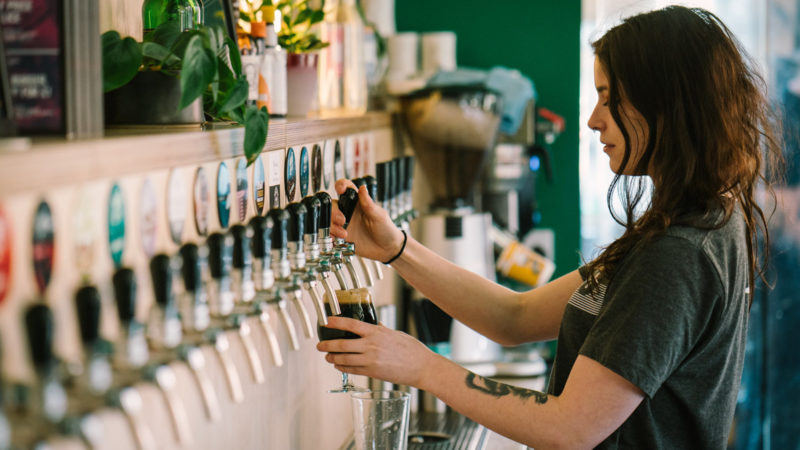 Whether you prefer hoppy IPAs or lively sours, these tap rooms offer the freshest pints you’ll ever come across.

Tap rooms have all the perks of your usual drinking dens, with the added bonus of freshly-brewed beer by your favourite brewery. You can sup much-loved pints and one-off creations just metres from where they’re brewed. There are great-big modern taps with onsite food vendors and small-scale pop-ups on the go. Whatever your preference, there are plenty to add to your bucket list, so without further ado, here are the best brewery taps in Leeds.

The Meanwood Brewery’s Terminus Tap Room & Bottle Shop has a distinctly homely feel. It’s a cosy little space with stone walls covered in brightly coloured bunting and local artwork. They offer a variety of their own keg and cask beer, like the Heroic IPA and the Exile Sour, which are brewed-in house. They also stock a host of hand-picked guest ales on tap and in the fridges, which change on a regular basis. You can pair your pint with a cracking cheese toastie, but if you head down on a Sunday, you can devour a proper roast.

Kirkstall Brewery Tap & Kitchen is completely different to any brewery tap in Leeds. It combines the warehouse-style taprooms of the US with a homely British pub feel. The walls are covered with old brewery memorabilia and traditional chandeliers hang from the high ceilings. At their bar, you can get all of Kirkstall’s classics, like Virtuous on keg and Three Swords on cask, alongside one-off creations made yards away and hard-to-get guest brews from across the region. If you get peckish over a pint, check out their Romagna and Naples-style pizza. Horsforth Brewery is one of the city’s most exciting up and coming breweries and owner Mark Costello opens its doors on the first Saturday of every month. It’s an intimate, family-friendly affair in the heart of the brewery, with mix and match seats and a miniature bar. You can choose from six keg beer and one cask – most will be Horsforth’s own brews and one will be a guest line. If the weather is in your favour, there’s a spacious outdoor area, but if not, you can cosy up playing board and video games inside.

You can find Vocation Brewery’s tap room in Assembly Underground, a hidden street food haven. Their bar is fitted with a staggering 50 taps, which means you can sample their entire range, from the Life & Death IPA to the Breakfast Club stout. They also serve carefully-selected brews from the UK and abroad. Hungry? Their neighbours include Holy Ramen, Slap & Pickle and Falafel Guys. The whole place is tucked away at the bottom of a Grade II-listed building and is furnished with long wooden tables perfect for large groups.

Nomadic Beers is based in Sheepscar, just outside the city centre. Every month, they set up a load of tables in the brewery and host a taproom you can bring the whole family to – there are games for the kids and there’s plenty of delicious beer for the adults. Their bar is stocked with their core brews like the Pale, a citrusy session ale, and the Strider, a biscuit-flavoured bitter. There’s special guest beers as well as wine, cider, gin and soft drinks. All this can be enjoyed to a backdrop of live music and street food.

Nomadic Beers, Unit 11, Sheepscar House, 15 Sheepscar Street, Leeds, West Yorkshire, LS7 1AD. Nomadic Beers host their taprooms on the third Saturday of the month (except February) and all their events can be found on their Facebook page.

You can drink freshly brewed beer yards from where it’s made at North Brewing Co. Brewery Tap. It’s a 200-capacity brewery with long tables set up right next to the tanks. They’re the folks behind North Bar, so you can expect some familiar favourites. Hoppy drinks and playful flavour combinations are their forte – they offer everything from the Transmission IPA to the tropical Piñata pale from their nine taps. Usually you can order in a takeaway to pair with your brew, but come summer they host Eat North, their weekly street food festival.

North Brewing Co. City Tap is one of the best tap rooms in Leeds city centre. It’s a sleek, modern venue on Sovereign Square – we’re talking floor-to-ceiling windows, wood panelling and high stools. Their bar has 24 taps and the fridges are filled with cans, so you’ll have full reign of North’s most-loved creations and one-off collaborations you can’t get anywhere else. They also offer kegged wine and cocktails. Feeling peckish? Their resident street food vendor Little Bao Boy will provide you with stomach-lining goods like bao buns and miso noodle soup.

Tapped is a modern brewpub, just like the ones made popular in the US. There are plenty of seats in this spacious venue and the copper tanks give it a proper brewery feel. A whopping 13 cask ales and 14 keg beers await over at the bar. The line-up switches regularly – they offer a mix of local and international brews, alongside their own Growler IPL, which goes straight from the tanks to the taps on the bar. For even more options, check out their beer-packed fridges. To top off your visit treat yourself to one of their stone-baked pizzas made fresh in their pizza oven.

Northern Monk Refectory is one of the best brewery taps in Leeds. It’s housed in the Grade II-listed Old Flax Store in the heart of the South Bank, right above the brewery. The tap room itself has a cool industrial feel – think exposed brickwork and pillars interspersed with green plants. Behind the bar, you’ll find 16 keg and two cask lines, as well as beer fridges, so you can sample their core and small-batch brews, from the Eternal Session IPA to the Death Imperial Stout. Couple your pint with something from the kitchen and you’re good to go.