The Best Chips in Leeds

These aren't just any old chips, these are the very best chips Leeds has to offer. 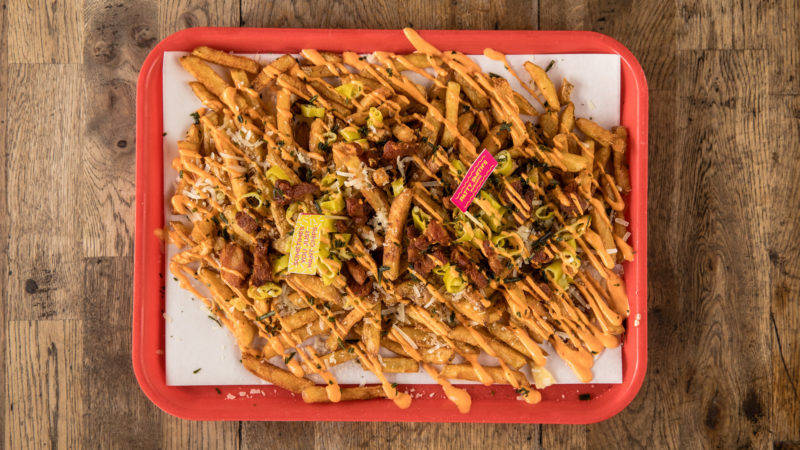 Chunky or chip-shop, French fries or sweet potato, Leeds does chips and it does them well – but where can you get the very best?

You can find chips in nearly every restaurant in Leeds, but some are just better than others. We’re talking perfectly seasoned twice-cooked chunky chips, sweet potato fries covered in all kinds of toppings and fiery fries cooked with salt and pepper. Heck, there’s even chips that swap potatoes for veggies. Have you tried them all? Or have we missed your favourites? Let us know…

Bundobust do things differently – they save their potatoes for the Vada Pav burger, and instead use ladies’ fingers to make the legendary Okra Fries. These really are a sensation – you get a big pile of fried okra in a cardboard bowl for £4.50. Each one is coated and deep-fried in their signature chickpea batter, then seasoned with a crack of black salt, a dusting of garam masala and a sprinkling of mango powder. They stand up to the very best chips in Leeds, especially when you’ve got a pint of Bombay Dazzler in the other hand.

If you like your fries smothered, hot and dirty, Red’s True BBQ are ready and waiting. They stick proper American-style skin-on fries and moreish sweet potato fries together in a bowl for £6 and pile it high – and higher again. You’ve got a tower of juicy smoked pulled pork as well as cheese, chipotle sour cream, spring onion, sliced jalapeños and salsa. This loaded bowl of tastiness will go down a treat with one of their big meat trays or a stacked burger – in fact, they might just steal the show. If you want your fries 100% vegan, head to Knave’s Kitchen at Oporto. Their Bombay Bad Boys are a tasty, fiery affair. For £6.50, you’ll get a heaving basket of thin-cut chips smothered in their lively tikka sauce. Covered in chunks of onion bhajis and crushed poppadoms, with lashes of homemade mango chutney, raita and the love-it-or-hate herb that is coriander, it’s a worthy twist on loaded fries that demands to be tried, again and again.

Twice Cooked Chips at The Reliance

Whether you’re popping into The Reliance for just a few drinks or treating yourself to a proper meal from their enticing menu of modern British classics, you need to make sure there’s a bowl of chips on your order for a snip at £3 a bowl. The Reliance’s twice-cooked chips are a big, chunky affair, more like the size of a chocolate bar than anything else. They’re slightly crispy on the outside, but the thing that sets them apart is how lovely and soft they are once you bite in.

Almost Famous is another burger joint that does chips just as well as it does patties. The Bacon Bacon Fries are, pardon the pun, famous for their sheer decadence. You get a tray of both skin-on and sweet potato fries for £4.75, and on their own, they’re good enough to polish off. But it’s the toppings that really make them special – they’re drenched in a tangy bacon bacon mayo and finished with the salty, crunchy bacon rain.

Patty Smith’s isn’t just about burgers – they also cook up one of the finest piles of chips in Leeds and they go down a storm with a pint. The Session Fries are £9.45 and an absolute joy – served on a massive tray, they’re twice-cooked with the skin left on, so they’ve got a crunch on the outside, but they’re as soft as a cloud on the inside. They’re topped with smoked pancetta, pecorino, fried rosemary, pickled chillies, Sriracha chilli mayo and rosemary sea salt. They come in a serving that’s big enough to share, just don’t be surprised if you polish off the lot yourself.

There had to be a portion of proper chippy chips on our list and we’ve chosen a stone-cold classic that’s been going since 1960. The Fisherman’s Wife is a city centre chippy in Kirkgate Market that serves up good old-fashioned food – their chips are chunky, floppy and just £2.49 a portion. Eat them the way they were intended, with salt and vinegar, or go wild with curry sauce, gravy or mushy peas.