When you want a burger, get your hands around these. 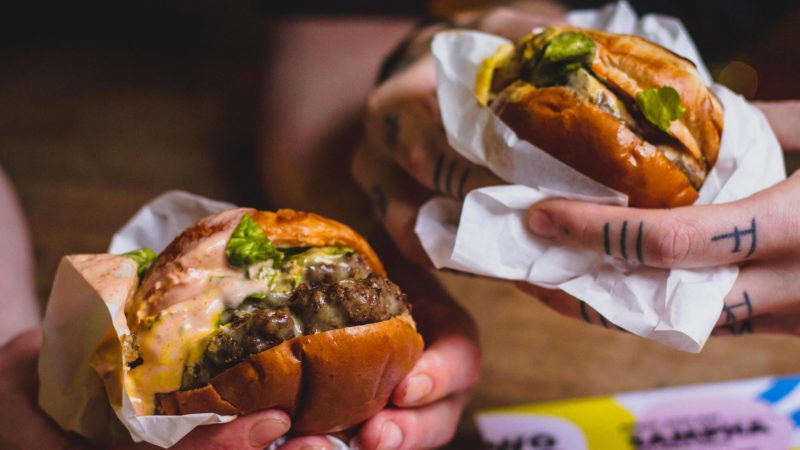 Whether you want beef, chicken or 100% vegan, Leeds does burgers very well indeed – but which ones are the best?

Oh boy, these burgers are something else. We’ve scoured the city’s finest eateries to find 10 must-have combos. You can tuck into a good old fashioned dirty beef burger, tackle a chicken burger smothered in katsu sauce or try a spicy Indian potato burger. Heck, you can even swap buns for Yorkshire puddings. So go on, try them.

The Vada Pav is the stuff of legends. It’s the jewel in the crown of Bundobust’s Indian street food menu and you’ll soon see why this is Mumbai’s favourite burger. They roll up mashed potato into a ball with their secret spice mix before deep frying it, so it’s crispy on the outside but fall-apart-soft on the inside. It’s covered in red and green chutney and served in a doughy brioche bun for just £5.50.

This is Leeds at Almost Famous

Almost Famous is one of the best burger joints in Leeds, but have you tried their This is Leeds burger? It’s a sky-high stack of indulgence. The double cheeseburger comes first, and they go to town on it, covering it with bacon, BBQ pulled pork, shoestring onions and mac ’n’ cheese. Then come the sauces (redneck BBQ, peppered mayo and Henderson’s Relish), before it’s topped with a slice of Wensleydale cheese. All of that for £11? Deal.

The Donut Burger at Red’s is practically famous. And it’s exactly what it sounds like – a hefty meal where sweet meets meat. You’ll get two sweet glazed donuts sandwiched around a single or double beef patty smothered in burger cheese, Dirty sauce and Unholy BBQ sauce. Wait, there’s more utter indulgence to come with smoked bacon and crispy onions thrown on top. Served with Frickles on the side for £10.95, it’s a must-try.

Crocodile Burger at The Fox and Newt

If you want to expand your horizons, there’s only one place to go, The Fox and Newt. They do a host of unusual safari burgers, but the best is the Crocodile Burger. It’s served bright pink, and excuse the cliche, but it tastes just like salty chicken. They top it with lettuce, tomato and onion in a seeded bun, then slap on the tartare sauce. You can give it a whirl for £9.95.

If you’re looking for a vegan burger, Cantina is your go-to. Their Hellfire burger comes with a battered seitan patty covered in sriracha sauce. It’s piled high with crunchy onion rings and vegan mayonnaise before they sprinkle on the kicker, a handful of jalapeños. It’s all sandwiched between a soft white bun for £7.50, and trust us when we say, it definitely packs a punch.

The Dirty Burger at Patty Smith’s

If you want a good old fashioned beef burger, head to Patty Smith’s in Belgrave Music Hall. The Dirty Burger is the cornerstone of their menu and with good reason. You’ll get a Yorkshire steak mince patty served perfectly pink in the middle. It’s placed in a sweet brioche bun and topped with Cheddar, chipotle mayo, baby gem lettuce, vine tomatoes and dill pickles before they drizzle on American mustard. And it’s only £5.95.

Katsu Burger at Nation of Shopkeepers

This is a chicken burger with a difference. Katsu usually comes served with rice, but Nation of Shopkeepers has given this Japanese classic their own unique twist. They take a portion of their Cluckin’ Spicy Fried Chicken, place it on a soft brioche bun, then top it with lettuce and tomato. The pièce de resistance? It’s smothered in a rich and tangy katsu curry sauce. It’s a messy, yet tasty combo burger-lovers have to try – and all for just £7.

Want the ultimate takeaway burger? Place an order with Bad Boy Burgers. They’re renowned for their heaving piles of burgery brilliance, none more so than their legendary Triple Bad Boy. It ain’t for the faint-hearted – you get a thick and juicy beef patty topped with two more piles of meat (because one just ain’t enough). They stack it high with bacon and pulled pork before adding Monterey Jack, gherkins, lettuce, tomatoes, red onions and Bad Boy’s signature sauce, all for £7.45.

Wapentake went there, they made a burger out of Yorkshire puddings. First, you take your pick of beef, pan-fried chicken breast or spiced cumin chickpeas and sweetcorn. If you’re a meat eater, it’ll come stacked with a big pile of gammon, cheese and gravy, but if you go for the vegan option, you’ll get crumbled nut roast, veggies, vegan cheese and gravy. Either way, it’s rammed between two giant Yorkshire puddings for £8.95.

The KFB at Little Bao Boy

Are baos burgers? Well, it’s a warm soft bun, so we’re saying yes, at least for now. And we’re doing it with good reason, because Little Bao Boy’s baos need to be tried. Especially The KFB – it comes with a boneless chicken thigh marinated in Gochujang buttermilk and deep fried in their homemade flour mix. It’s placed inside a freshly steamed bao with lettuce, sesame seeds and a slathering of spicy sriracha mayo. It’s about half the size of a usual burger, and comes in at £4.50 a pop.