This is down & dirty junk food, but with a conscience. 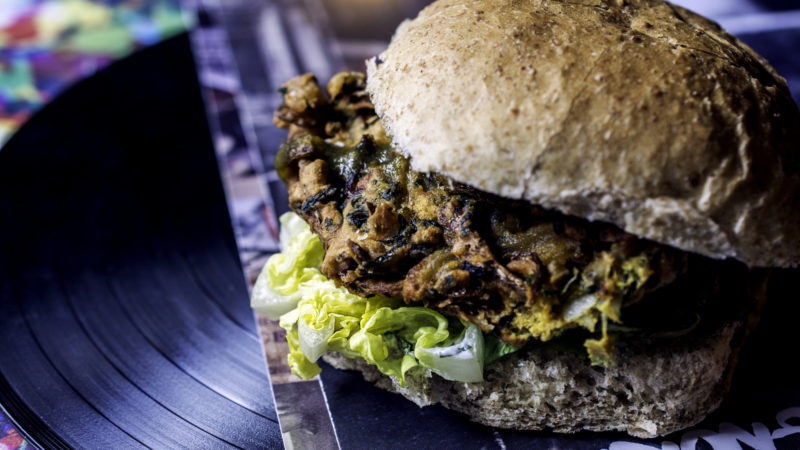 Things are a-changing at Oporto. They’ve been refurbishing the venue and will be relaunching on Thursday 29th March 2018 just in time for the Easter weekend. But it’s not just the look of the place that’s changed – they’re also introducing their brand new pop-up, Knave’s Kitchen. It’s a 100% vegan kitchen where you can indulge in all manner of guilty pleasures.

It was the same concept, down and dirty junk food, but 100% meat and dairy free. Paul and Ged loved the idea of messing with people’s conceptions of what ‘junk food’ is – and they’re going to be dispelling some of the misconceptions about vegan food too. That’s right, it’s kale free folks and there ain’t a lentil in sight.

“I’m a firm believer that being vegan is an absolute doddle,” Alex confessed. “Almost all the best foods can be ‘veganised’, but that being said, sometimes it’s hard to recreate that dirty junk food sensation you can only get from a takeaway. We wanted to develop a menu jam-packed with comfort dishes and deep-fried treats.”

The menu is petite, with just 5 mains and a selection of sides, but it’s surprisingly varied. Their not-so-secret ingredient is seitan. The vegans among you will no doubt be familiar with it, but for those of you who’ve never tried it before, it’s a plant-based protein that tastes… yeah, you guessed it… just like chicken.

Snaffle it in their version of a fish finger butty – sandwiched between doorstop bread with iceberg lettuce and their homemade tartar sauce (made vegan, of course). Or go for the ‘Mill Hill’ Special, a vegan kebab that promises a wrap loaded with grilled seitan, hummus, lettuce, pickles and chilli sauce. In Alex’s words, “it has all the sumptuous filth of a kebab without the guilty conscience”.

Alongside the seitan dishes, they’ve got some tasty alternatives. You could try the crispy satay tofu or the tangy Katsu curry with breaded tofu – but the real highlight is the Onion Bhaji Burger. It’s a favourite with Alex, “Vegan patty burgers have a tendency to be mushy and can fall apart easily, but the Onion Bhaji Burger is hearty, crispy and jam-packed with flavour.” They load it up with cucumber ketchup, raita, iceberg lettuce and tomato to give you a totally new take on the norm.

You’ll need something to wash all that naughty vegan junk food down and they’ve got just the thing. They’ve stocked the bar with as many vegan beers as they can get their hands on and the cocktail menu is 100% vegan too. They no longer use egg whites, so that frothy foam on your favourite tipples now comes from aqua faba, a tasty alternative made with chickpea water. If in doubt, just ask and they’ll be happy to help you choose a vegan-friendly bevvie.

Knave’s Kitchen is sure to be a popular choice with the vegans, but don’t write it off just because you’re a meat-eater – you might be surprised by just how much their vegan eats satisfy your junk food cravings. Check it out when it opens on 30th March 2018, it’s in their second room, and let us know what you think in the comments.