Where to Get Your Street Food Fix in Leeds

There’s a reason why these street food vendors are here to stay – they’re ruddy brilliant. 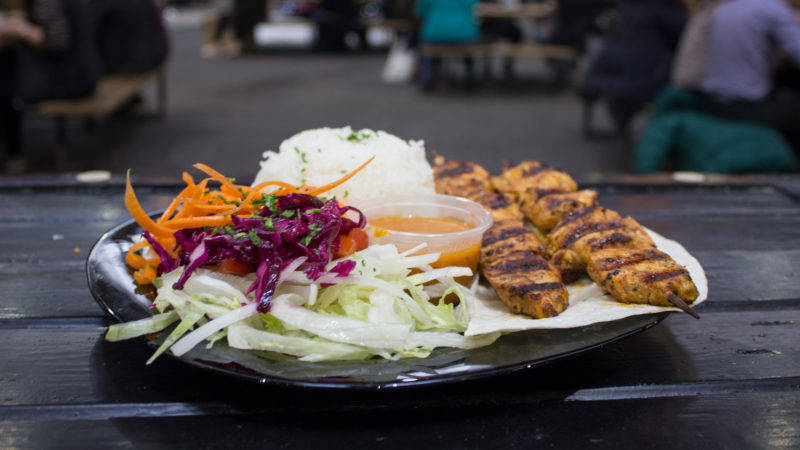 From Vietnamese pho to Yorkshire pudding wraps, these street food vendors are here to stay…

Leeds is famous for its street food. You can feast on loaded bowls of hummus, Neapolitan-style pizzas and Indian curries, hell even TripAdvisor’s number one is a street food vendor. And we’re not even talking about the travelling tuk-tuks and pop-up stalls you get at the city’s famous markets – these ones are here for keeps, so you can indulge your love of street food, every day of the week.

There’s a reason why this humble street food favourite is number one on TripAdvisor. The Falafel Guys make their own secret recipe hummus, falafel and tahini fresh every day. You can get three plump balls of falafel wrapped up with halloumi or chicken shawarma with salad, tahini, garlic mayo and chilli sauce – their wraps are absolutely loaded and incredibly filling, so you’re in for a stomach-stretching feast. If you do want to be healthy though, they do salads too. Find them on Briggate every day except Fridays and in Assembly Underground all week long.

How good does a Yorkshire pudding wrap sound? Amazing, right – and you can try one right here in Leeds. The Yorkshire Wrap Company will give you one of their giant Yorkshire puddings and stuff it with goodies, before you chow down on it like a burrito. You can have roast beef, red cabbage, onion and horseradish or roast pork, sage and onion stuffing with apple & mustard sauce. If you get there early doors, they’ve even got a full English one for you to try.

You get the best of both worlds at Bundobust – it’s a cool-as-heck craft beer bar that serves up Indian street food. This is a completely vegetarian dining experience, but you really won’t miss the meat. The menu is full of must-try dishes like the Bundo Chaat (samosa pastry, chickpeas, tamarind chutney, onion, yoghurt and turmeric noodles) and the Vada Pav (a mashed potato ball in gram flour served in a brioche bun). Grab a few plates and a pint – you’ll soon see why Bundobust is so well loved.

Banh & Mee is a Vietnamese street food kitchen that specialises in two things – pho and banh mí. Their pho is made using a recipe that goes back three generations and is served in a frankly massive bowl, with loads of meat, rice noodles, spring onion and herbs. It’s burn-your-tongue hot, but good luck trying to keep your spoon out of there, it smells (and tastes) too damned good to wait. Their jam-packed banh mí is also worth a try, as are the rice boxes, but if you want something different go for one of their boxes of fries, loaded with lemongrass chicken, BBQ chicken or Vietnamese pork patties.

Humpit started out life as a street food trader, but it’s now right at home in Leeds Corn Exchange. It’s got a big reputation thanks to its incredible hummus. The staple is The Humpit Classic, a bowl of hummus, whole chickpeas, parsley, olive oil and paprika. Top it with spicy salsa, mushrooms & onion or falafel, pine nuts and tahini, hell, you can even have all three if you want – and scoop it up with their homemade pitas. They also do falafel or hummus in a pita, filled with salad and pickles.

Manjit’s Kitchen is a longtime street food favourite in Leeds, but they now have a permanent spot in Kirkgate Market. Here, you’ll find Manjit cooking up an incredible array of traditional Punjabi dishes that taste as good as they smell. Their chaat station is what they’re most known for, with two different versions on offer – a traditional samosa one or a refreshing watermelon one. That’s not all they do though, you’ve got the likes of shahi paneer, aloo paratha and chana sweet potato cakes. If you fancy trying a bit of everything, go for one of their thalis, a three-course selection of the day’s dishes served on a tray.

Walk into Belgrave Music Hall and the first thing you’ll notice is the smell coming from Dough Boys’ kitchen. Their pizza slices are much loved and it’s easy to see why – they go down extremely well with a pint from the bar. They do some brilliant combos, we’re talking the Sausage Fest’s prosciutto, spinach, black pepper sausage, mascarpone and caramelised onions and the Queen Brie’s French brie, roasted grapes, black pepper and more of those sweet, sweet onions. Top tip – get there before 7pm from Sunday to Thursday or before 5pm on Friday and Saturday for a half price slice.

There’s nothing quite like Rola Wala’s twisted Indian street food. You’ll find it in the centre of Trinity Kitchen, but you’ll likely smell it first. They load their wraps, rice and cauli-rice bowls with incredible fillings, which you order in a Subway-style system. First pick your filling – you’ve got the likes of red channa dal, Keralan chickpea and Nagaland lamb to choose from. Then top it with a slew of tasty veggies and sauces. Packed full of incredible flavour, this is a must try.

The Mexican Pilgrim offers up an array of authentic Central American street food. The star of the show is their burritos – they fill freshly cooked tortillas with your choice of red wine pork, spiced chicken or avocado, as well as loads of veggies and toppings. That’s not all though – they also offer up the likes of tortas, quesadillas and tacos. You can find them throughout the week on East Parade, apart from Tuesdays when they head down to Leeds Dock.

Jenny’s Jerk Chicken is a proper Caribbean experience. This lively little street food stall is filled with the sounds of Jamaican music, but it’s the smell of jerk chicken that will really draw you in. They serve up BBQ chicken wraps, filled with veggies and jerk sauce, or how about a tray full of curried goat? It comes with a big pile of rice and salad on the side, so you won’t leave hungry. Jenny’s is great value for money and their portions are generous too.

Pizza Fella has traded in its retro Citroen street food van for a permanent spot in Leeds city centre. The quality is as good as its always been, so take a seat in their stripped back venue and pore over their menu of nine individually numbered wood-fired pizzas. You won’t have to wait long for this thin slice of Neapolitan-style heaven to show up, with toppings like the number two, a classic Margherita, or something a little more indulgent like the number eight with ‘nduja, balsamic onions and fresh chilli. Make sure you’ve got room for a scoop of traditional Italian gelato afterwards.

Poco is the first Sicilian street food joint in Leeds and it’s an absolute gem. Pair their lemon marinated roast chicken with the seasoned potato rustiche, or try their Pizza al Taglio, which is crisp on the bottom, but light and fluffy on top. The toppings change daily, so you could get Italian sausage one day, followed by Mediterranean veg the next. Don’t forget to add the gooey Nutella arancini balls as a sweet treat afterwards.

Get a taste of classic churrasco barbecue grub from Bread and Butter with their Pão Francês, a Brazilian sandwich. Choose between the Picanha (rump cap of beef), the Nicota (fillets of chicken thighs) or BBQ veggies. Each one comes in Brazilian bread, with a buttery, herb sauce and salad vinaigrette. You can even get a combo of all three in one, or add a portion of cassava fries on the side.

Head to Smak! for a taste of classic Polish cuisine. They’re regulars at the city’s street food markets, but now you can get their traditional fare all year round. The kiełbasa is their trademark. It’s a smoked sausage made to a family recipe that’s been handed down through the generations. But that’s just the start – they have other Polish staples like pierogi dumplings, zurek soups and bigos stews.

When it comes to hot dogs, there’s only one place you need to visit – Fat Annie’s. They’ve been cooking up brilliant bangers since 2014 and they’re really ruddy good at it. The Classic is a locally made pork and beef dog, but if you fancy mixing it up a little you’ve got options, like The Cheese One, which is a Big Melt sausage, with pork, beef, bacon, garlic and cheese. Whatever you go for, they come in a lengthy brioche bun piled high with onions and pickles. It’s not just hot dogs either – you can try the Philly Cheesesteak, a pile of sliced rump steak with cheese, green peppers and onions in a ciabatta.

Mr Mackerel is the only street food trader in Leeds that will give you a proper taste of Turkey. Their most popular dish is the grilled mackerel sandwich, a big piece of fish jammed between a French baguette. It’s not just fish though – they also do grilled chicken or lamb shish kebabs, served on a Turkish pita, with a pile of rice, salad and a small tub of soup. It’s a delicious feed, so make sure you get down there early, because it’s incredibly popular.

Love burgers? Make a beeline for Assembly Underground where you’ll find Slap and Pickle. Their patties are made using a house blend of 40-day dry-aged grass-fed chuck and short rib beef from Swaledale, which they top with a medley of combinations. Take The Baconator – this double cheeseburger comes with smoked bacon, lettuce, pickles and S&P burger sauce. Alternatively, just go for loaded fries, topped with your choice of cheese, cheese and bacon or chilli cheese.

At the far side of Belgrave’s bar, you’ll find another kitchen worth visiting. Patty Smith’s are specialists of the Dirty Burger. It’s a gooey, messy affair, a beef patty smothered in American mustard, chipotle mayo and double cheese. If you’re not a meat eater, go for The Leafeater, a spiced beetroot, fennel and cannellini bean burger. And if that’s not enough, their mountain of Session Fries, loaded with meat, chillies, Sriracha chilli mayo and rosemary sea salt is guaranteed to fill the hole in your belly.

European Street Food award winner Ranie Sirah is the brains behind Jah Jyot and he’s mastered the art of Punjabi street food. Their speciality is the Masala Dosa, a rice flour and spinach pancake smothered in masala sauce and filled with your pick of spiced aloo, paneer and chicken. That’s not all – you can expect a rotating line-up of curries, like Amritsar Chicken, Aloo Bhaingan and Chole Masala, or get one of their Thali plates, which will get you a taster of three, with rice, a naan and samosas.

Trinity Kitchen is a street food wonderland in the heart of Leeds. Alongside a slew of permanent eateries, they bring in six new street food vendors every six weeks. In recent times, we’ve seen the likes of Doh Hut, Let’s Go Wild Boar and The Little Red Truck to name but a few. It’s a permanent fixture, but it’s changing all the time – what will you discover on your next visit?