This is your chance to try 19 Magic Rock beers! 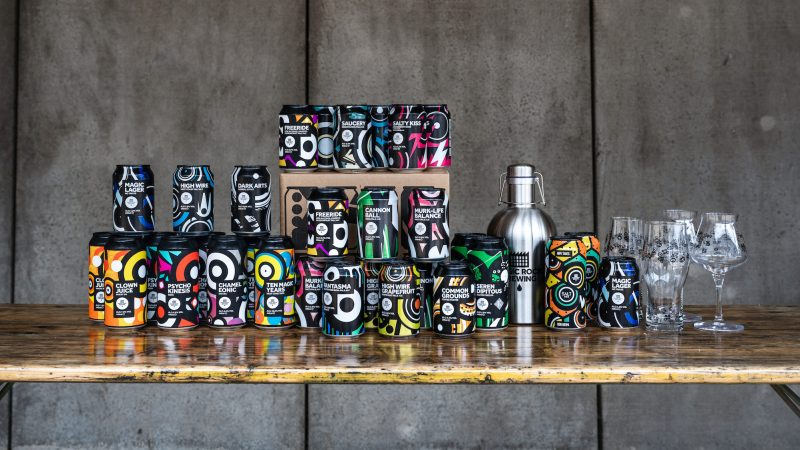 Made by the beer obsessed, for the beer obsessed, Magic Rock has become one of Yorkshire's most beloved breweries. Their beers are known for their balance, their drinkability and their intense yet approachable flavours. Try them today.

From their early days in an out-building on the family plot to their Huddersfield brewery where they produce 2.7 million pints a year – Magic Rock has come a long way in a decade.

Magic Rock is a wonderful curiosity. Inspired by local brewing tradition and emboldened by the amped-up flavours of American beer culture, this famous Yorkshire brewery has created a niche all of its own. Their beers, which pack a punch without losing any of the drinkability, have won them an army of fans in 25 countries around the world. And you could soon be one of them because we’re giving one lucky winner the chance to try every canned beer in their current collection!

Ibble obble black bobble – which will you try first? Cask, keg, can – Magic Rock do them all, picking their vessel to match the unique characteristics of each beer, but today, we’re all about the cans. Why? Because that’s what we’re giving away! You can bag two of every canned beer in their collection, along with a 2-litre growler and a pair of Craft Master and Mini Teku glasses. But what will you be drinking?

Let’s start with the IPAs! Saucery is their session IPA. At 3.9%, it’s made for drinking all day long – expect a fruity body, tropical undertones and balanced bitterness. Cannonball is stronger and hoppier – it’ll slap you in the face with a big punch of flavour and leave you wanting more. Which brings us to Clown Juice. A wheat IPA, it’s full of tropical hoppiness, juicy flavours and orange spiciness – trust us, it’ll go down a treat!

Want more? Try Ten Magic Years! A celebration of a decade of brewing, it’s an insanely drinkable, hoppy sensation with a big dollop of mango and citrus. 10 hops, 10% ABV, 10/10! Now sold out, this is your only way to get your hands on it! Next up is Fantasma – the first gluten-free IPA in Magic Rock’s collection, made with Brewers Clarex®, it’s all about the mango. And that’s been joined by Serendipitous, another gluten-free IPA, this time with an almighty hit of citrus and pine. Your prize includes two Double Dry Hopped IPAs. There’s Clairvoyance. At 7.2%, it’s a clean-hopped hit with a big blast of passionfruit, mango and lime. Next up is Chameleonic, a mysterious brew that transforms on your tongue to give juicy mango, guava and grapefruit zest.

We’ve got a few more pales for you. High Wire, their tribute to the West Coast of America, is a perfectly balanced pale with mango, lychee and grapefruit on a smooth-as-silk malt base. Its tangy sibling, High Wire Grapefruit, comes with an even bigger hit of lip-smacking citrus thanks to its 100% natural pink grapefruit flavour. And Murk-Life Balance is an aromatic hazy pale with a big body and a surprisingly sweet finish.

Wait, there’s more! There’s Common Grounds, a full-bodied triple coffee porter made with seven different malts and seven different coffees, and three total curveballs. Salty Kiss is a gooseberry gose, tart and slightly sour with a hint of saltiness, Magic Lager is a crisp German-style lager, and Freeride is a low alcohol beer with the bite of an IPA. Then bringing this epic tasting experience to a close, is Dark Arts, their core stout – decadent and indulgent with a full mouthfeel, it’s a melting pot of chocolate, liquorice, blackberries and figs.

Fill out the form below and hit 'Enter Now' by 5pm on 10th September 2021. We use the info you share with us in accordance with our terms and privacy policy, so we can send you emails with news, offers and even more competitions you might want to enter.

The free prize draw is open until 5pm on 10th September 2021. There is one prize available. The prize is 2x Dark Arts (330ml), 2x High Wire (330ml), 2x High Wire Grapefruit (330ml), 2x Freeride (330ml), 2x Saucery (330ml), 2x Murk-Life Balance (330ml), 2x Fantasma (330ml), 2x Cannonball (330ml), 2x Ripe Times (440ml), 2x Clairvoyance (440ml), 2x Chameleonic (440ml), 2x Common Ground (330ml), 2x Salty Kiss (330ml), 2x Magic Lager (330ml), 2x Clown Juice (440ml), 2x Serendipitous (440ml), 2x Ten Magic Years (440ml), 2x Craft Master 2 Glasses, 2x Mini Teku Glasses and 1x 2-litre growler. Worth £137.60. All canned beers in their collection at the time of competition go-live. Delivery included. Subject to availability. This free prize draw is open to UK residents with a valid UK postal address only. One winner will be randomly selected from the database of entrants who completed the prize draw online entry form. Employees and family of Magic Rock, Leeds Digital Magazines or any agencies connected with the set up of this prize draw are not eligible to enter. No cash alternative. The winner will be contacted by email. The winner must confirm that they’re eligible and able to accept within 24 hours of the email being sent. If a winner does not contact us within this time period, we reserve the right to choose another winner at random from all other eligible entries. All entrants must be aged 18 years or over. Please drink responsibly. Standard Leeds-List terms and conditions apply.
Share
Share
Share