The next generation of flats are being built right now. 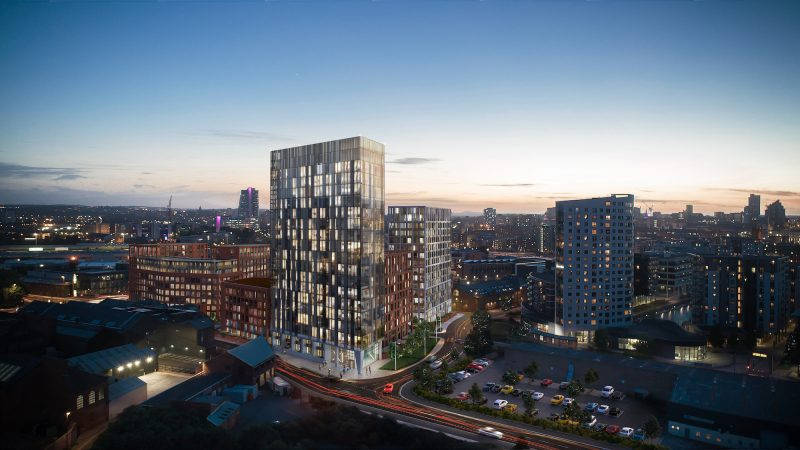 These new build flats in Leeds are going to make city living better, greener and cooler than ever.

Modern flats designed for modern life – they’re going up all over Leeds right now. Whether you’re looking for spacious new build apartments with tip-top green credentials, stylish flats mere minutes from the hubbub of the city centre or luxurious penthouses with epic views across the Leeds skyline, these imminent developments have been designed to make you feel right at home as soon as you walk through the door. Take a glance at what could be your next and greatest move yet. 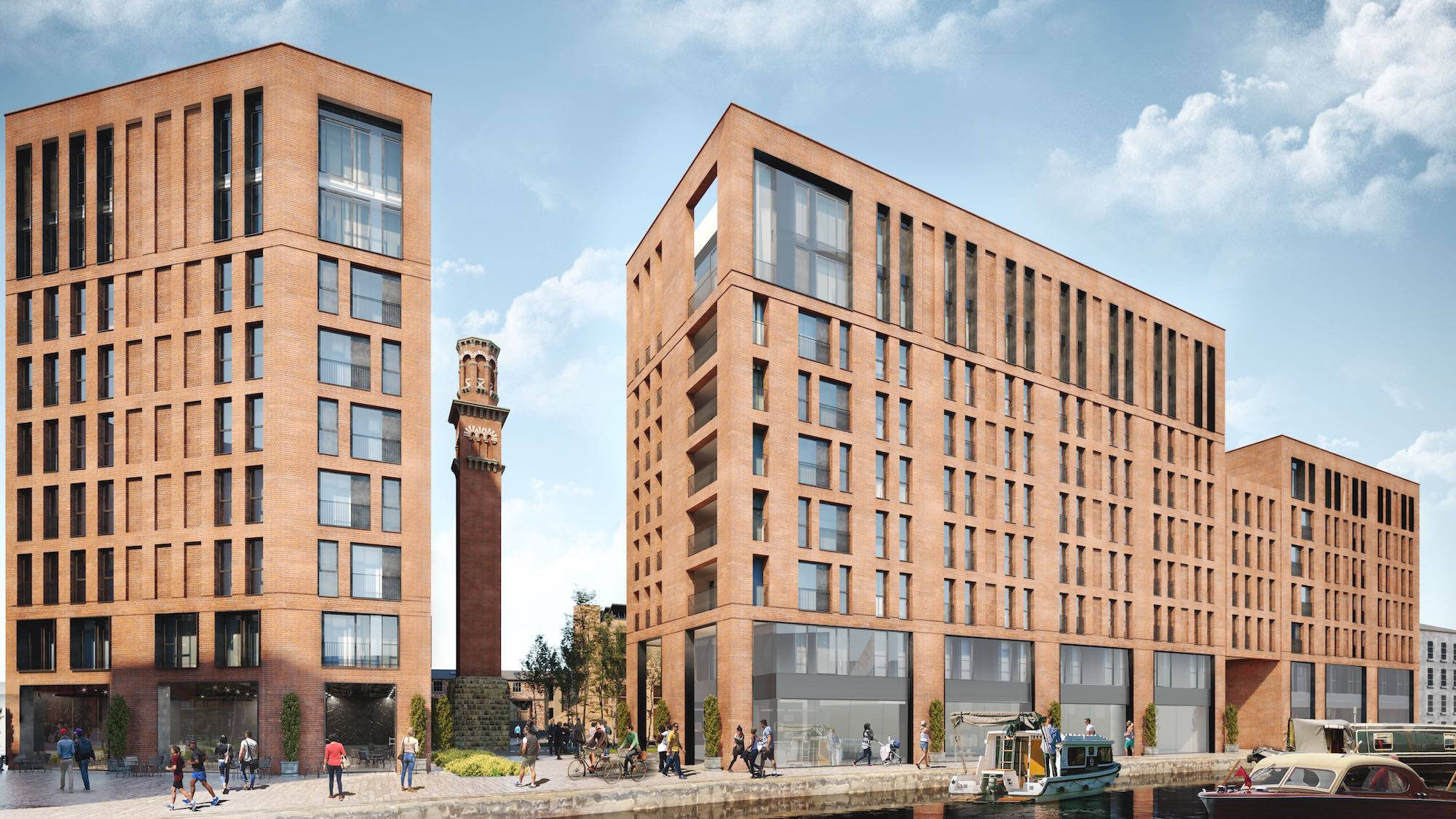 With the trio of restored iconic Italianate towers and the Grade II-listed Engine House at its centre, Tower Works is the perfect marriage between past and present, just a few minutes’ walk from Leeds city centre. This complex of 245 one, two and three-bed new build flats has been designed to match the aesthetics of the old with the emerging look of the South Bank and is on track for completion in early 2023, over 40 years since the site was last used.

Externally, the priority is sensitive regeneration, but inside the apartments, the focus is on luxury, sustainability and efficiency. Each flat will have open-plan living space, with light-flooding doors and windows, some with their own terrace area. Over half of the site will be dedicated to landscaped public space, including a new square which sits at the heart of the development. And outside the complex, you’re in walking distance of everything great the South Bank has to offer, from Granary Wharf to Holbeck Urban Village. 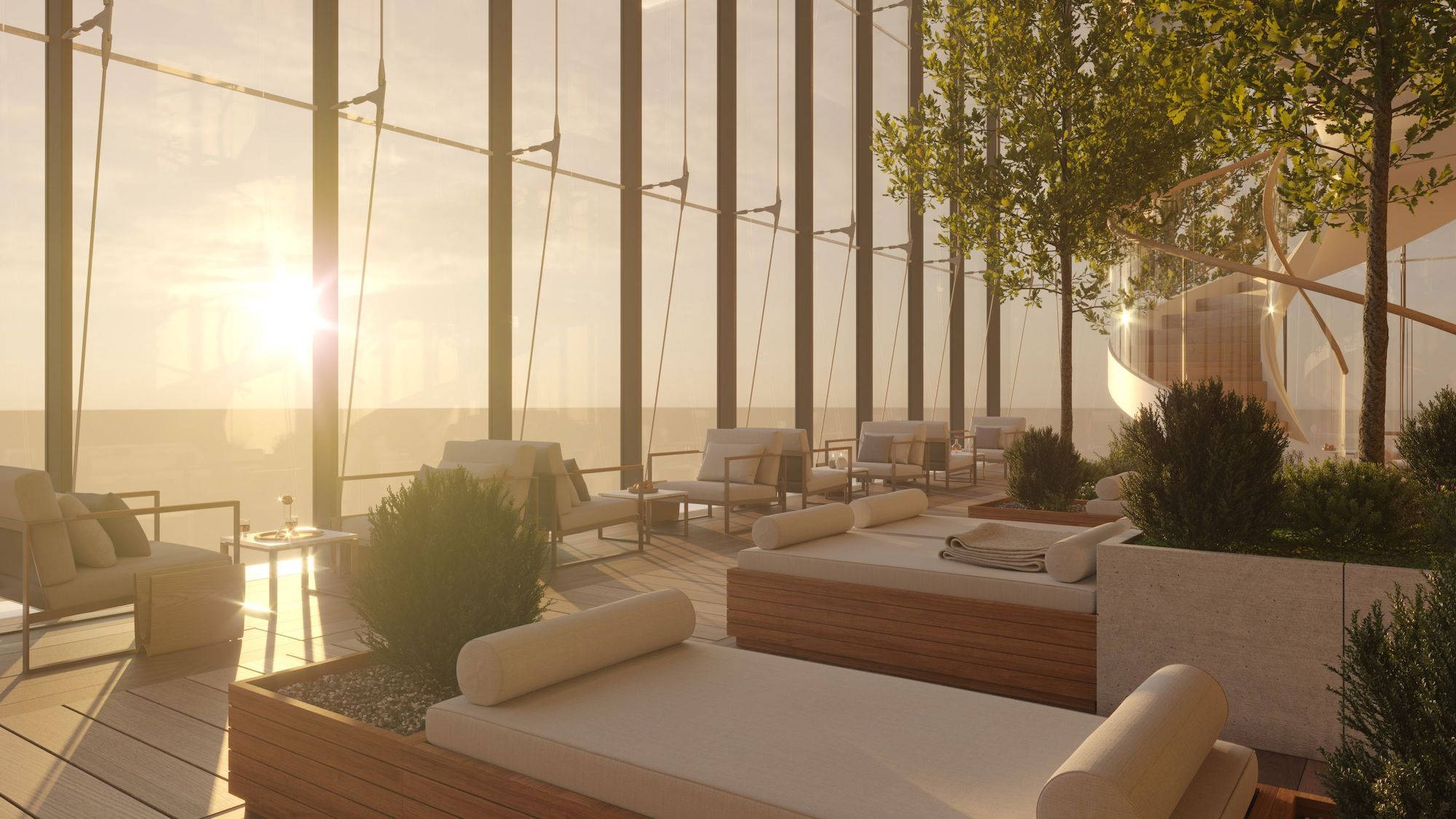 How would you like to live in the tallest building in Leeds? Well, at Springwell Gardens, that could be your future. The second of two towers will take the title from Bridgewater Place when it completes later in 2022, but height is definitely not all Springwell Gardens has going for it. Across the two new sail-like buildings, there will be a staggering 828 new build flats, the majority of which are one and two-bed, with just 57 three-bed – 41 of the total are designated as affordable housing.

Enough numbers, what’s the pull? The four duplexes have private terraces with city-wide views, but the communal gardens will be just as appealing – these urban escapes span the 21st, 22nd, 23rd and 33rd floors, bringing you an indoors-outdoors vibe with floor-to-ceiling windows. The individual flats themselves come with Juliette balconies, high-quality appliances and fitted wardrobes with more details to come. All this just 10 minutes walk from the city centre, with Mint Warehouse, Northern Monk and the treats of Water Lane just by your front door. 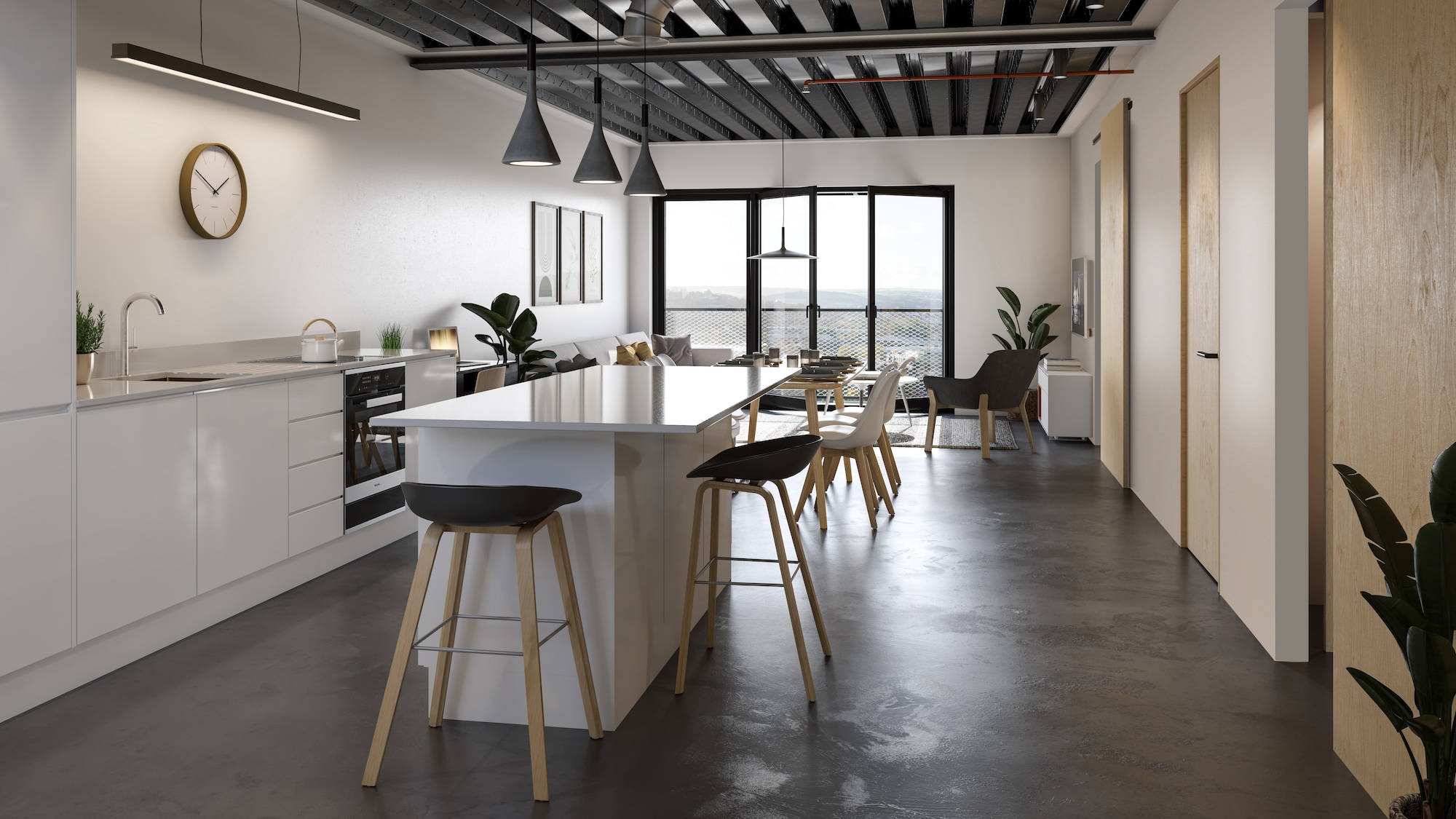 By the time the whole 15-acre site is completed by 2030, CITU’s Climate Innovation District will be the UK’s biggest sustainable urban development. The first green shoots have already been completed in the form of townhouses, and the next step will be the 108 flats of Aire Lofts which sit along the River Aire, offering up one and two-bed sanctuaries. These Leeds new builds help the planet by providing innovative, sustainable and carbon neutral city centre living just five minutes from St Peter’s Square, a little further to Kirkgate Market.

The flats sit in contrast to the design of the neighbouring Landing Place and Central Place townhouses. They trade Scandi-style for industrial chic, very a la mode. Exposed steel pipes and polished concrete floors offer a stripped-back base for apartments that are furnished in style, generous in space and drenched in light – there’s south-facing windows in each flat. You have seven different layouts to choose from, so you can find the best fit for you, but each one comes blessed with a Juliette balcony at the very least, so you can connect with the nature below and enjoy views across the communal landscaped square. 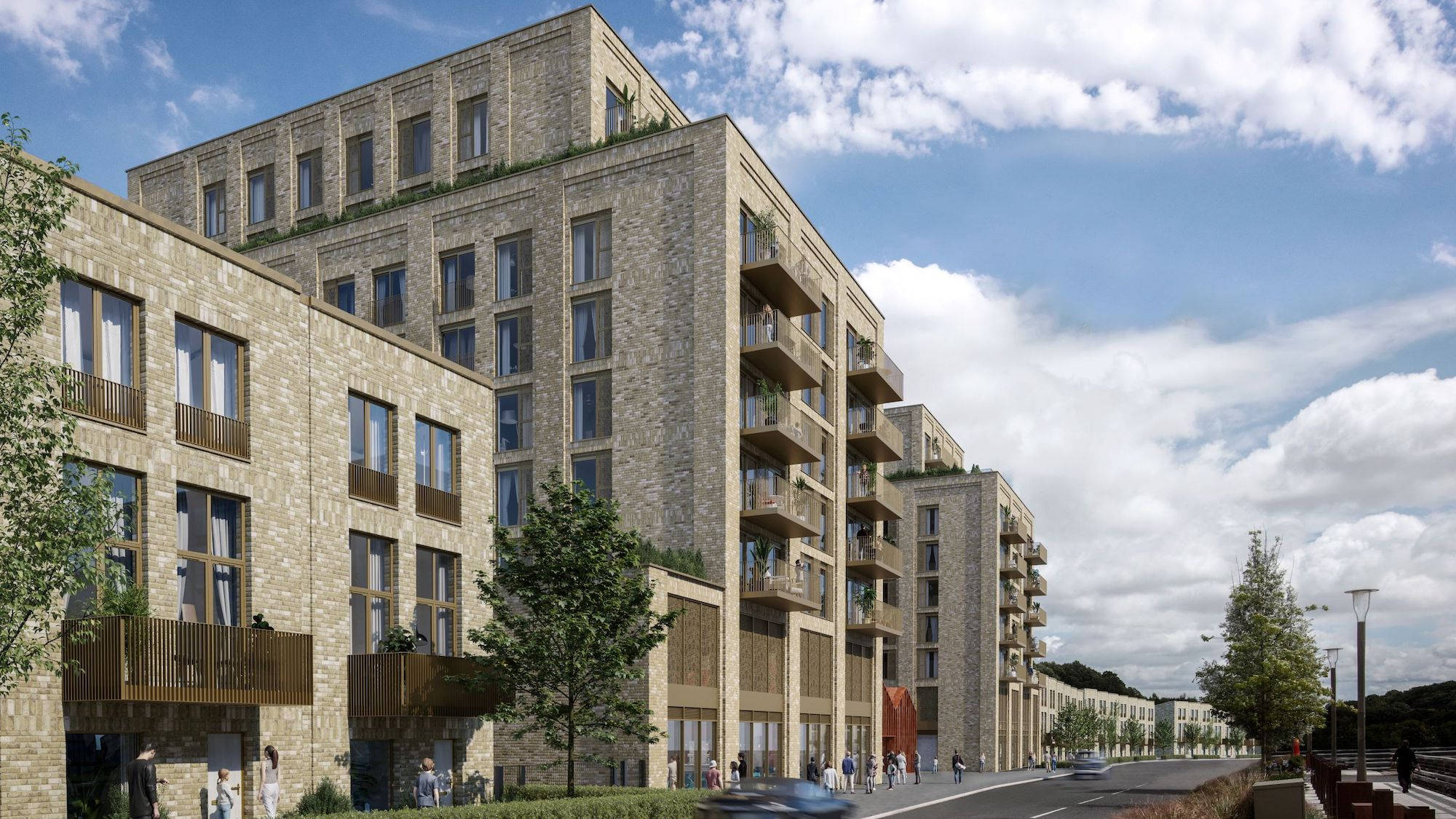 Kirkstall Forge is one of the most important new build apartment developments in Leeds and the project is moving apace. One Kirkstall Forge is fully let office space and the new train station is used by over 200,000 passengers a year – so it’s time to build upon the community already here by switching focus to creating a new residential neighbourhood on the banks of the River Aire. This next phase of the complex will welcome 136 apartments, ranging from studios to three-bedroom flats, alongside 77 contemporary townhouses.

The beauty of living at Kirkstall Forge is how multi-faceted it is. The flats are of the highest specification, from the open-plan layouts to the floor-to-ceiling windows, open staircases and high ceilings, all complemented by top-of-the-range fixtures and fittings. There’s so much going on outside your door too. They’re creating a public plaza and investing in the public realm. There’s already Butler’s cafe bar on site, with more to come. You can also make use of the many on-site amenities, from yoga classes to bike hire, with the knowledge that Kirkstall, its Abbey and all of its shops, bars and attractions are just a short walk away. 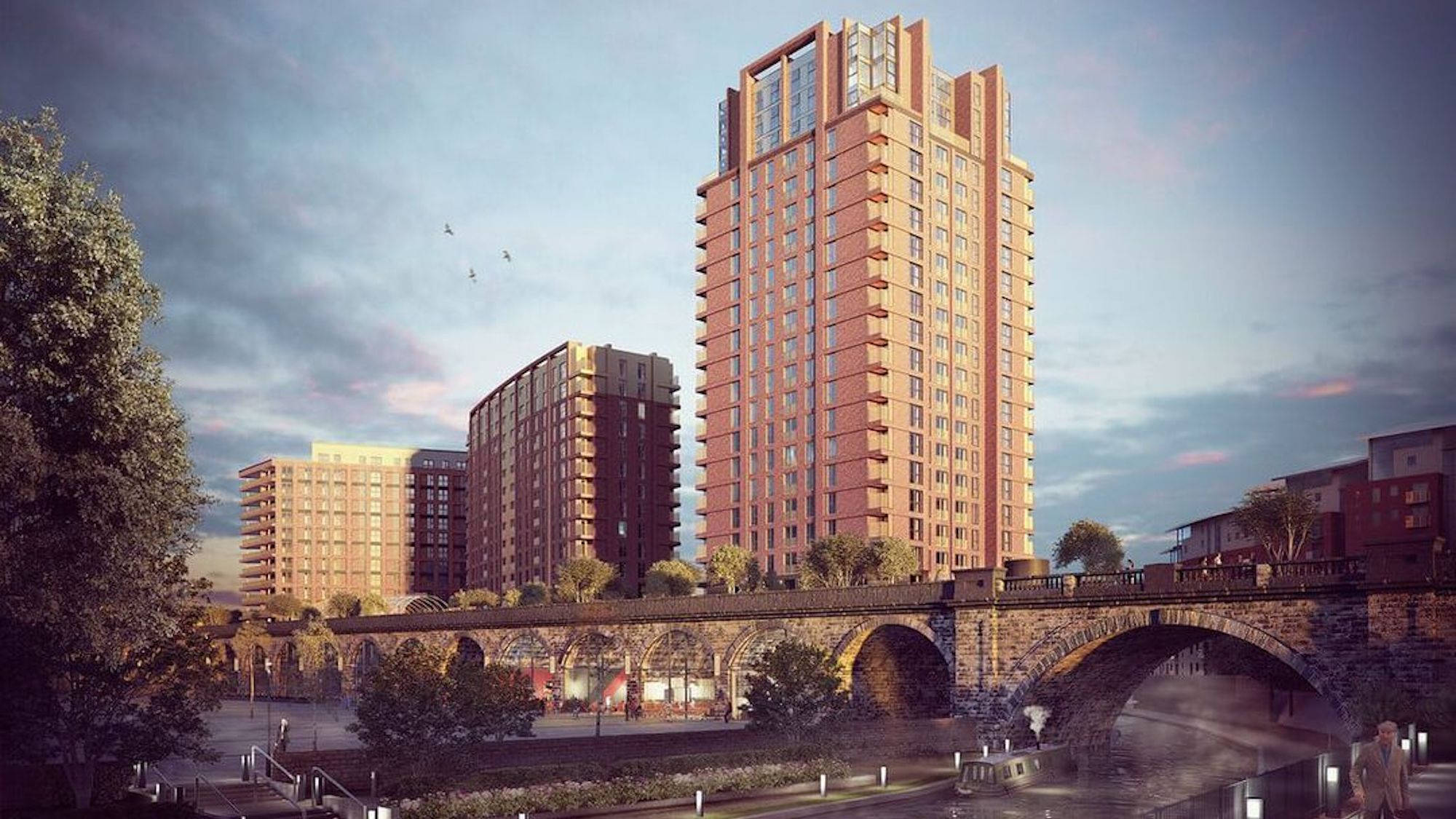 A new riverside neighbourhood is set to open this autumn in Leeds city centre. The Junction will bring 665 one, two and three-bedroom built-to-rent apartments to part of the long-empty Doncaster Monkbridge site between Wellington Road and Whitehall. The pet-friendly flats promise stylish and spacious city centre living, but with the aim of bringing everything you love about Leeds all into one area. Inside the complex, you can look forward to an array of social spaces, including co-working lounges, private meeting rooms, open gardens and communal kitchens for hosting.

But outside the apartments is where The Junction really sets itself apart. Part of the site is shared with a series of old, empty railway arches which they’ll be transforming and bringing back into use. They’ll be filled with independent shops, bars, cafes and restaurants, while the outdoor areas around the arches and apartment buildings will be put to use to host events, street food trucks, makers markets, outdoor cinema, art exhibitions and more. Above the arches, the old Monkbridge Viaduct will be a greenery-filled walkway into the city centre, with the new Latitude complex on the other side. It’s everything you could ever need, right on your doorstep.

The Junction, Whitehall, Leeds, West Yorkshire, LS12 1BE. Prices to be confirmed. 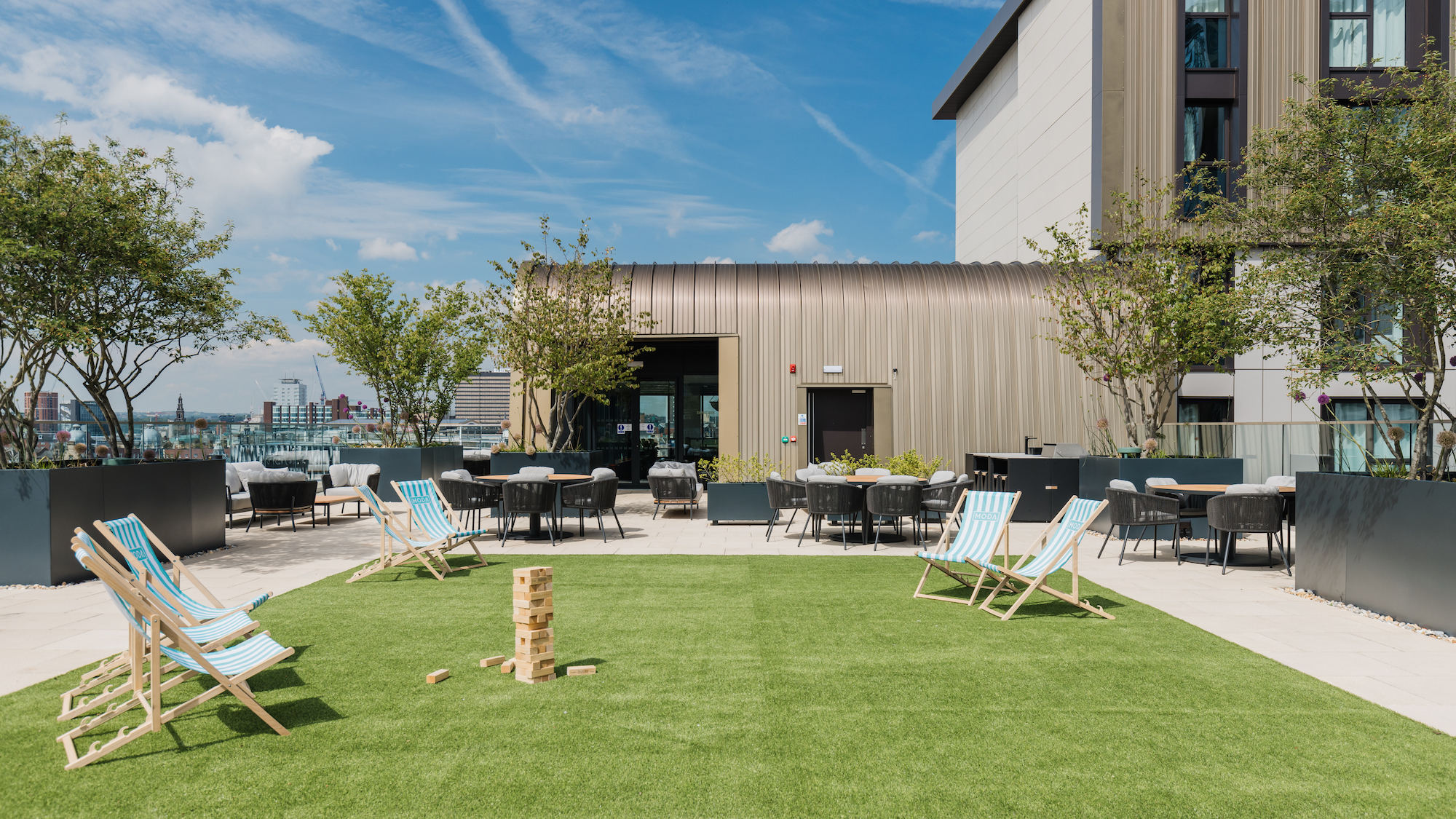 History comes back to life at New York Square. Yorkshire-based Moda Living have transformed the historic Quarry Hill site, once home to an iconic modernist flat complex that housed 3,000 people, and built two 16-storey towers that will contain 515 rental apartments – the first phase, Rockland West, has just opened and the second phase, Rhodes East, will follow in October 2022. This is one of the biggest, most complex and important new build flat developments in Leeds in a generation. Why? Well, the location for starters.

Its centrality means New York Square is focussed on creating a community, something considered in every corner of the build. The flats are tastefully decorated, with state-of-the-art fixtures and fittings, but that’s just the start. The extras are almost endless – free wifi, on-site gym, shared lounge, roof terrace, private dining room, cinema, games room and parking for cars and bikes. Home working is revolutionised with their on-site co-working spaces and well-behaved pets are welcome – heck, they don’t even take deposits. Throw in neighbours like Leeds Playhouse, Leeds Conservatoire, BBC Yorkshire and The Wardrobe, and New York Square will be a game-changer. 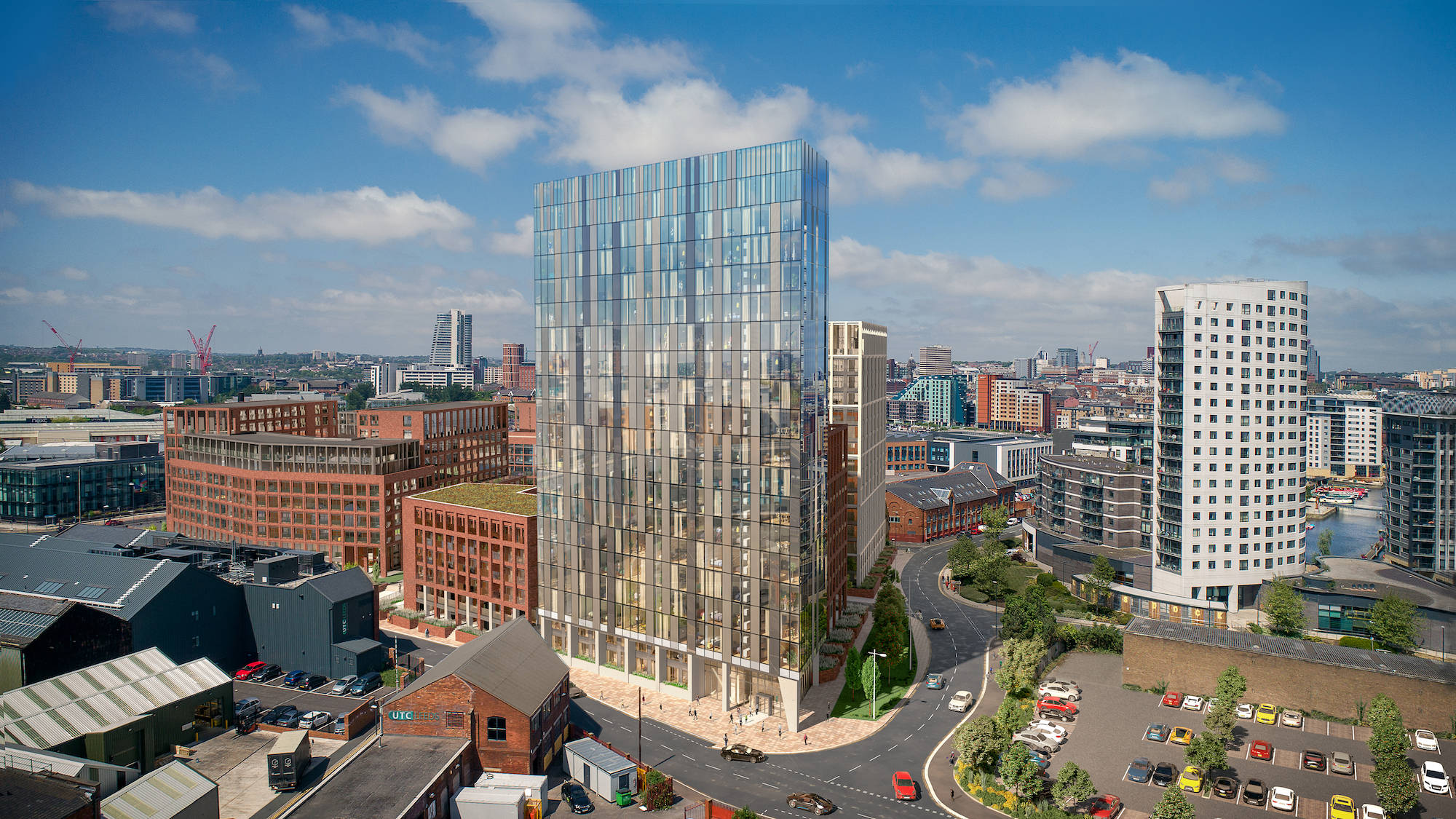 The biggest project in the 130-year history of The Guinness Partnership will see 928 new build apartments and townhouses built near Leeds Dock on the site of a former car dealership. This is a game-changer – the five towers, spanning six to 20 storeys, will be built in five phases, and the first is already underway for completion by spring 2023. It includes an initial 311 one, two and three-bed apartments, all of which are designated affordable housing.

The final finishes of the apartments are still to be confirmed at this early stage, but expect open-plan living across a number of layouts and bright, floor-to-ceiling windows, with a medley of full and Juliette balconies for your own outdoor space. The on-site facilities elevate Points Cross, with space for retail, hospitality and gyms and, if you need more, the city centre is reachable in 10 minutes. Its green credentials are laudable too – photovoltaic panels will power the entire first phase and, post-completion, there will be water run-off systems, car-sharing clubs and EV charging points. 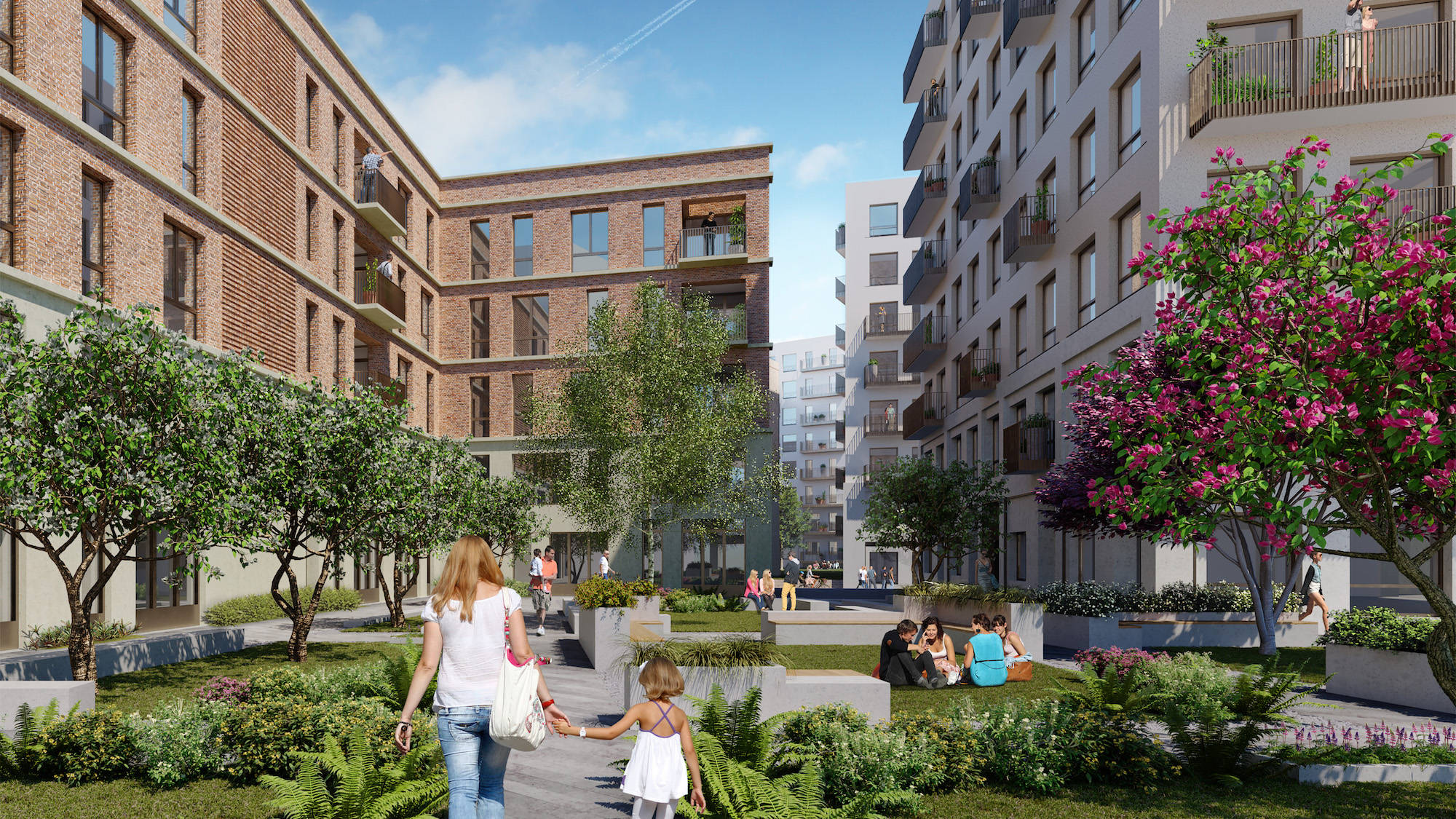 This is much more than just a development of new build flats in Leeds, it’s the creation of a new 3-acre district where you can live, work and play all in one place. Aire Park is the name given to the complete overhaul of the former Tetley Brewery site from renowned developers Vastint. Across a series of phases, they will create 85,000 square metres of office space, 15,000 square metres of leisure space and a 400-bed hotel, as well as around 850 new flats less than two minutes from the heart of Leeds city centre.

The homes are a key part of the first phase of the project currently underway and pencilled in for completion by 2024. And while details on their final specifications are not set in stone, the fact this will be an incredible place for city living is. On your doorstep will be the UK’s biggest city centre park, a staggering five acres, stretching from the banks of the River Aire to Crown Point Road and surrounding The Tetley bar and gallery, as well as The Tetley Triangle, a new open-air public event space. As if that’s not enough, there will also be a pub next door, as they refurbish The Crown Hotel back to former glories.

The old is as important as the new at Sky Gardens. This huge development will see the refurbishment of the Grade-II listed Midland Mills as well as the construction of a brand new cloud-touching residential tower in the heart of Leeds’ ever-growing South Bank. The new build will house 284 one, two and three-bed apartments, while the old building will feature 22 luxury flats, when the project is completed in late 2024.

Each one is spacious and teeming with attention to detail, from the bespoke kitchens complete with islands in the penthouses, and three different types of flooring to USB charging points, sustainable LED lighting and high performance floor-to-ceiling double glazing. On site, you might never want to leave with a state-of-the-art gym, sauna and steam room, as well as a 33rd floor internal garden offering 360-degree views of the city. But if you do fancy a trip out, the abundant amenities of the South Bank are minutes away. 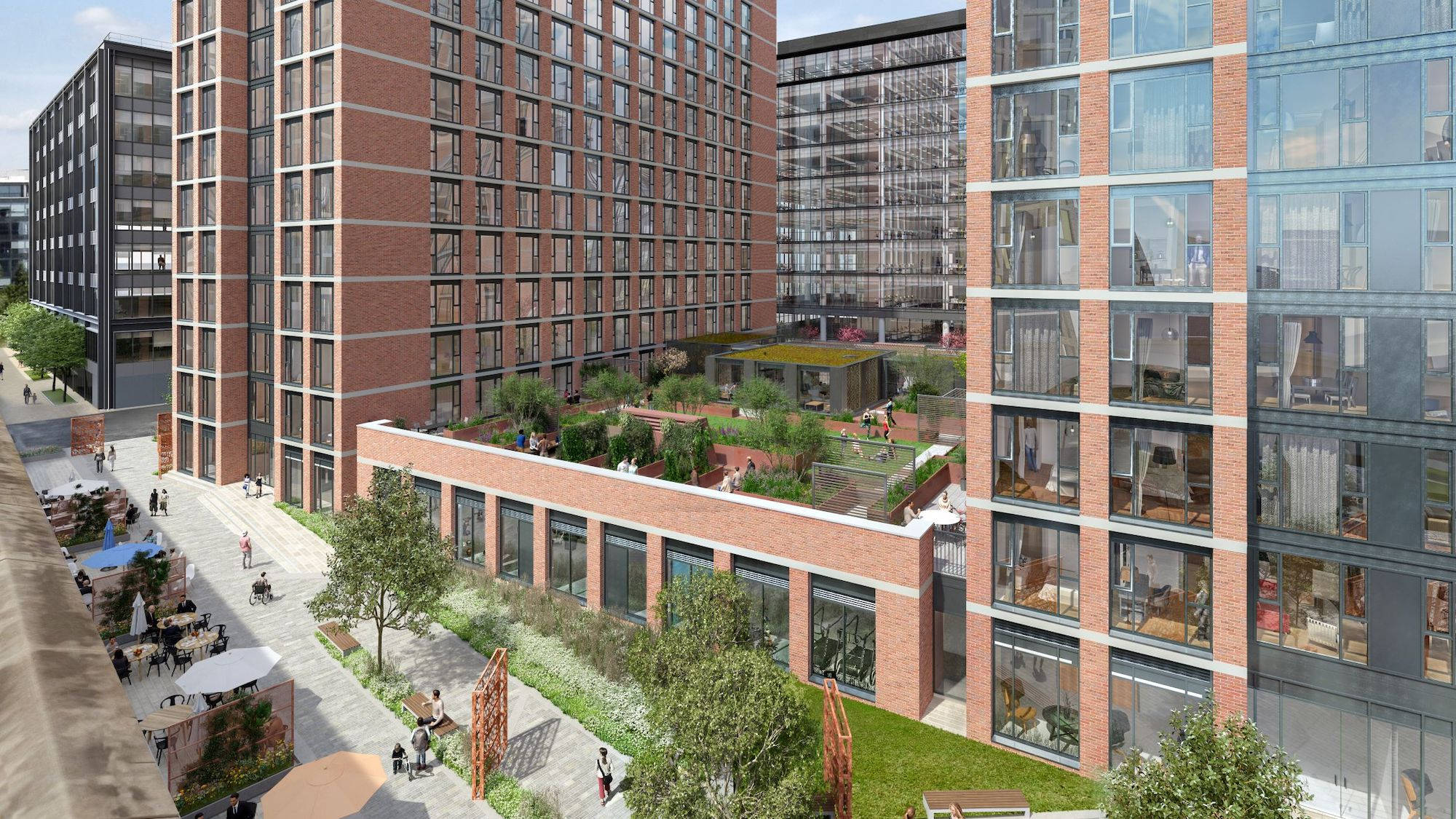 One of the most exciting developments of new build flats in Leeds will soon be found at part of the former Doncaster Monkbridge metalworks site along Whitehall Road. It will initially consist of a pair of skyline-altering buildings in 2024, the tallest standing at 21-storeys high, which will deliver a massive 463 new one, two and three-bed apartments within 10 minutes of the city centre. The project will move on to a second phase which will see two taller buildings, at 28 and 36 storeys, home to a further 488 new one to three-bed flats.

The Latitude complex promises stylish apartments, but it’s what this development offers as a whole that will set it apart. The first two flat towers will sit either side of a connected podium which will provide a gym, car parking and communal space below with a landscaped garden above. The second set of towers will have plenty of leisure space and sit next to a historic railway viaduct that will be transformed as part of The Junction development into an open-air garden walkway 25 feet above the ground, connecting the West End with the South Bank. The arches below will house new leisure units and help knit together a new city centre community.